The largest LEGO consumer set ever is currently available only on Amazon.

The LEGO Star Wars UCS Millennium Falcon, the largest LEGO consumer set ever created, is in stock and ready to ship from Walmart and Amazon. 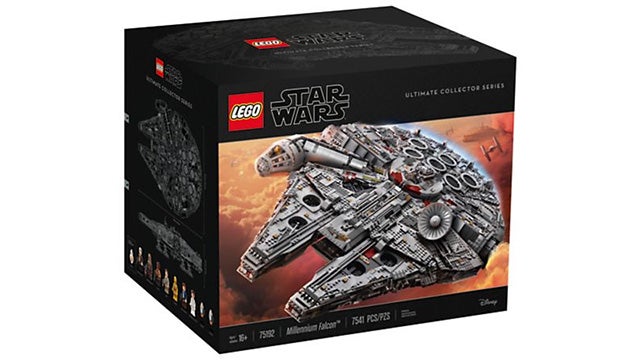 This set is currently only available at Walmart and Amazon

For those of you playing catch up, the LEGO Star Wars Ultimate Collector Series (UCS) Millennium Falcon was unveiled during Force Friday 2017. With 7,541 bricks, it boasts 1,190 more pieces than the previous biggest LEGO consumer set ever, the Taj Mahal, and 2,346 more pieces than the previous UCS Millennium Falcon which was released back in 2007. This behemoth measures 8″ high, 33″ long, and 22″ wide and weighs 29 pounds.

The Millennium Falcon is normally listed at $799.99, which is also the price you’ll see at Walmart and Amazon. Currently every other vendor is out of stock and has been for a while. This set was released to LEGO Shop VIP members only back in October and sold out the same day. It came back in stock in December, this time for everyone, and sold out again within the same day. Ever since, there have been some occasional restocking at big box stores, but these have sold out within hours.

Although this is easily LEGO’s most expensive consumer set ever, it’s actually a pretty good value compared to other LEGO Star Wars UCS sets:

Of course not all bricks are the same, and a set could have a ton of pieces that are 1×1 in size. That’s not the case with the Millennium Falcon, which weighs twice as much as the LEGO Death Star that appeared in Marvel’s Spider-Man: Homecoming. In fact the only currently available LEGO set that can match the Falcon’s longest dimension of 33″ is the 1,969 piece LEGO NASA Apollo Saturn V Rocket, which measures 39″ from top to bottom.

The LEGO UCS Star Wars sets have among the best resale value across all LEGO franchies. Once LEGO discontinues a Ultimate Collector Series set, the price on eBay and other marketplaces skyrocket.

The Game Awards 2019: Where to Watch, Start Time, How Long, and More