So close to the glorious monitor trifecta.

As with any maturing technology, 4K monitors are slowly starting to go down in price. Not long ago 27″ and 28″ monitors were near $1,000, but are now comfortably in the $500 or less range. One such monitor is the BenQ EL2870 Video Enjoyment Monitor (See it on Amazon) / (See it on Amazon UK) and despite its affordable price tag it has support for HDR, putting it in fairly rare company, particularly at this price.

It’s not a gaming monitor per se, but it does include AMD’s FreeSync technology if you’re on the Radeon team. I took it for a test spin to see how it compares to the competition, and to answer the burning question: Can it truly deliver… Video Enjoyment? 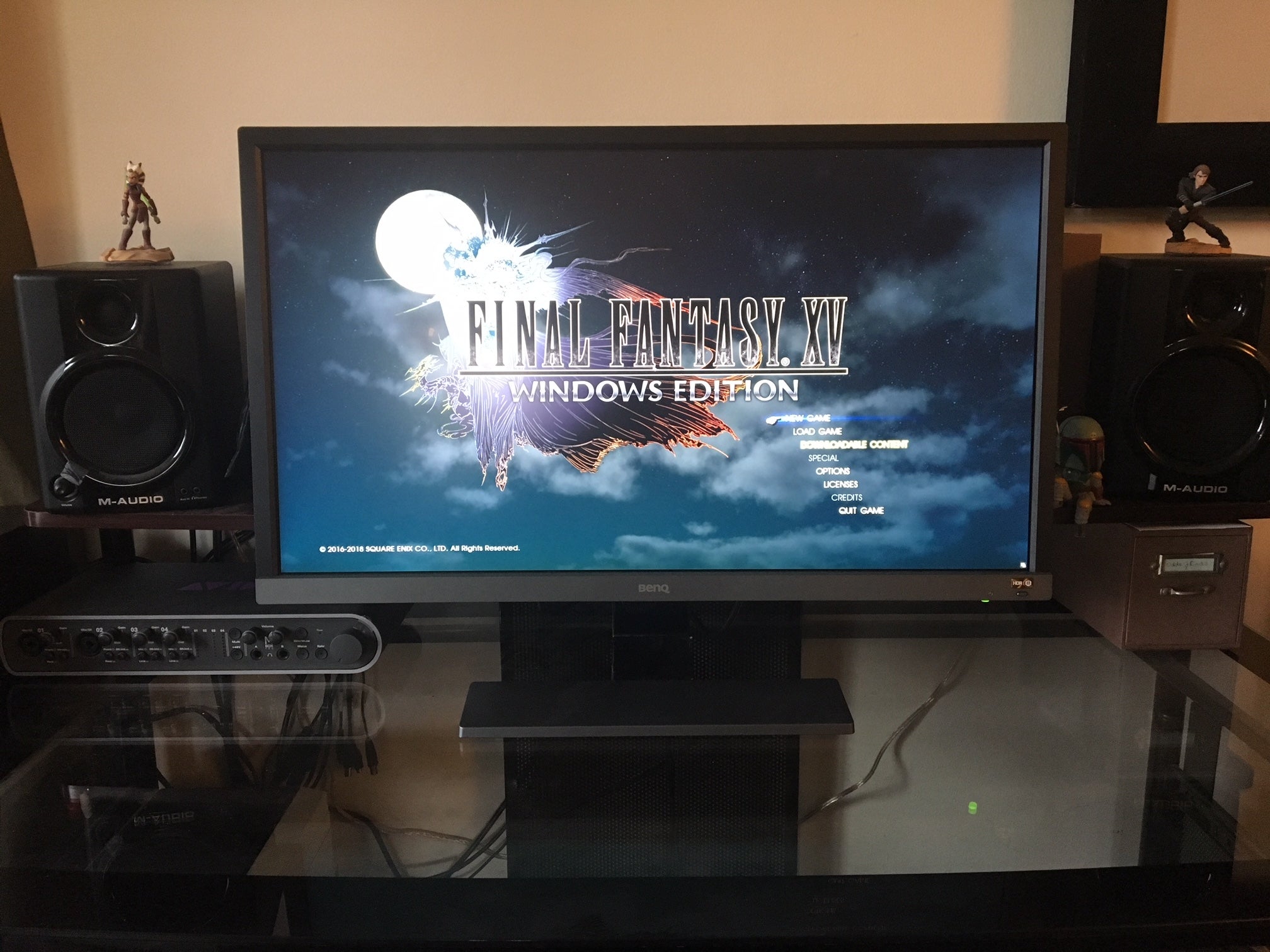 HDR (High Dynamic Range) is one of the prime features on the EL2870U. There’s a button on the bottom right of the bezel with a shiny gold badge above it that toggles HDR on and off. After selecting it, an on-screen display will briefly pop up to tell you whether or not the HDR you’re displaying is emulated or native (if it’s native it just says ‘HDR On’). The button also can turn on Brightness Intelligence Plus (B.I.+) technology. This adjusts the brightness and color temperature depending on the ambient light of your room.

There’s a light sensor under the bottom bezel that can be turned on in the menu and it adjusts the brightness and color settings on the fly. An ‘Adjust by duration’ setting slowly warms the color temperature as the day progresses too, which is a feature smartphones use and has also been a browser extension for awhile now too. The idea is to help reduce eye strain throughout the day (there’s a Blue Light mode for this purpose as well).

It’s an interesting concept but not something I would use while gaming or anything else that requires consistent, accurate color. When the light sensor picks up a change in the ambient light an indicator pops up showing that the setting is changing and it pulls my focus every time. It’s great if you’re just doing productivity work though.

The EL2870U features a pretty basic design. There’s a two-tone color pallet of gray and black, save for the small gold HDR/B.I.+ badge on the lower right. The bezels are substantial at 17mm along the top and sides and 24mm along the bottom. The power and menu select buttons are on the underside of the bottom bezel out of view, although the HDR/B.I.+ button is on the front edge. Its T-shaped stand is solid, but only allows for monitor tilt of 5 degrees forward and 15 degrees back. There is the ability to attach it to a VESA mount though if you want more adjustability.

Connectivity is limited to one DisplayPort 1.4 and two HDMI 2.0 ports (a DisplayPort cable is not included, just HDMI). The only other jack is a down-facing headphone out on the back panel next to the display inputs. There is no USB 3.0 hub.

Two built-in 2-watt speakers point down. Even at full volume they sound thin and distant. As always I highly recommend using external speakers or headphones. It’s a far more enjoyable experience, even with inexpensive desktop speakers.

For gaming the EL2870U does have FreeSync adaptive sync technology. That’s great news for the AMD crowd. It is the FreeSync we know from the past few years and not FreeSync 2, which is unfortunate since this is a HDR monitor. The 10-bit TN panel has a 1ms gray-to-gray response time with a 60Hz maximum refresh rate. The max brightness comes in a little under the 300 cd/m2 listed in its specifications. This is right around the average we see for monitors, but it’s problematic when it comes to HDR which I’ll talk about in testing section below.

Putting the BenQ EL2870U through its Lagom paces yielded some results you’d expect from a TN panel; it aced the Response Time test with minimal flickering in any of the boxes, and its viewing angle isn’t all that great. Some of the colors are a bit off in the contrast test as well, particularly reds. Gamma is a little low, ranging from just over to just under 2.0 as the luminance decreases.

In order to test the HDR I watched streaming shows from Netflix and played HDR-supported games like Final Fantasy XV. For Netflix it’s important to make sure HDR and advanced color is turned on in your display settings, otherwise the EL2870U will use its HDR emulated setting. I was hoping for a Video Enjoyment moment, but unfortunately was disappointed. There’s was very little detail and visual artifacts in the blacks while colors were crushed in the higher intensities. Watching the same material without HDR was significantly better. There still wasn’t a huge amount of black level detail, but the colors didn’t look as crushed.

Gaming with the HDR on was a better experience than watching Netflix, but not by much. The artifacts weren’t as apparent, but the black levels still just weren’t very good. Having the 1ms response time is great, but for HDR the trade off made in color and black level with a TN panel as opposed to an IPS panel isn’t worth it. Playing without HDR on, the 4K image was nice and crisp and the added ability to use FreeSync is great if you have an AMD video card. But the gaming features on this monitor are a bit limited. So overall it’s a pretty straightforward experience and nothing too surprising, or impressive.

Without taking the HDR into account, the BenQ EL2870U has a pretty decent 4K picture, although with the drawbacks you expect from a TN panel. It has useful daily features if you want to limit eye fatigue with Brightness Intelligence Plus, but its gaming features are limited and it doesn’t have the color accuracy for any detailed visual work. Its not a horrible value for the money, but there is plenty of room for improvement.

The 5 Best Versions of Joker in Video Games, Ranked

Ariana Grande – break up with your girlfriend, i’m bored