Bernie Sanders is back: Socialist appears fit and well after heart surgery as he jumps into 2020 Democrats’ debate by trying to steer subject away from impeaching Trump

Bernie Sanders returned to the debate stage Tuesday night – just a little over two weeks after suffering a heart attack – hoping to deflect the message from impeaching Donald Trump back to issues he says Americans care about.

The 78-year-old senator appeared reinvigorated in his first campaign-related event since he was taken to a Nevada hospital on October 1 where he had two stents implanted to clear a clogged artery in his heart.

Questions emerged over Sanders’ age and ability to handle the office of the presidency after he admitted a packed campaign and rally schedule had him more ‘fatigued’ than usual ahead of his heart attack.

In his first interview after his surgery, Sanders said he ‘misspoke’ when he said he was fatigued and said he would be returning the the campaign trail ‘soon’ and run an even more ‘vigorous’ campaign than before.

Even though the self-described Democratic socialist said Democrats have ‘no choice’ but to impeach Donald Trump, he made it clear he didn’t want to make combatting the current president the focus of his campaign.

‘I think it’s absolutely imperative we go forward with impeachment. I hope that he is impeached,’ Sanders said. ‘But I think what would be a disaster, if the American people believe that all we were doing is taking on Trump.’

‘We cannot and must not turn our backs on the pain of the working class of this country,’ he added. 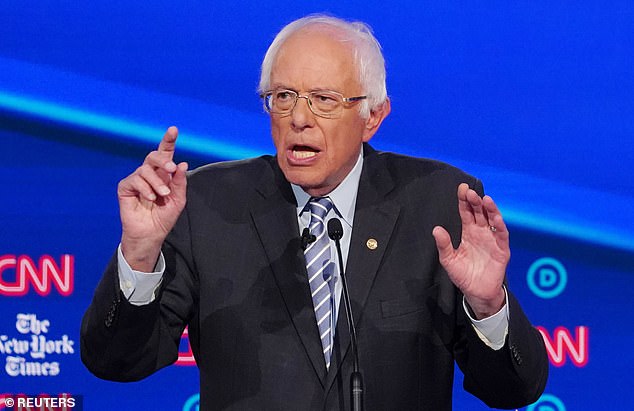 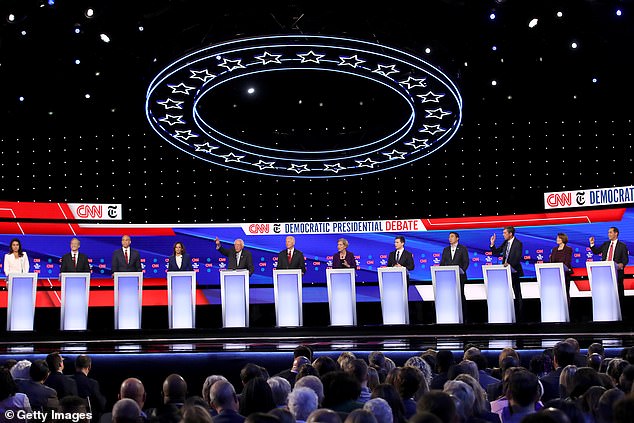 He appeared fit and reinvigorated alongside the 11 other 2020 Democratic presidential candidates in Westerville, Ohio Tuesday night as he attempted to shift the conversation away from the impeachment inquiry into Donald Trump

He also asserted that it would be a mistake for Democrats to forget about issues million of Americans face like those who have insufficient health insurance or are uninsured and those who are living paycheck-to-paycheck.

‘We cannot and must not turn our backs on the pain of the working class of this country,’ Sanders said.

Sanders has also used his heart attack scare to promote his Medicare for all proposal, which he claimed during the fourth debate Tuesday night that his plan would be ‘better than the Canadians.’

In a video released last week, where the candidate appeared more muted than his usual fired-up self, he said he couldn’t imagine going through what he did in Las Vegas, Nevada earlier this month if he wasn’t insured by both his healthcare through the Senate and Medicare.

‘As somebody who wrote the damn bill, as I said, let’s be clear. Under the Medicare for All bill that I wrote, premiums are gone. Co-payments are gone. Deductibles are gone. All out-of-pocket expenses are gone,’ Sanders said. ‘We’re going to do better than the Canadians do. That’s what they have managed to do.’

‘At the end of the day, the overwhelming majority of people will save money on their health care bills,’ he continued in his answer that was limited to a one minute and 15 second response. ‘I do think it is appropriate to acknowledge that taxes will go up. They will go up significantly for the wealthy and for virtually everybody, the tax increase will be substantially less than what they were paying for premiums and out of pocket expansions.’

Sanders is one of a dozen Democratic candidates who appeared on the debate stage in Westerville, Ohio Tuesday night for the fourth primary debate. The first questions of the night allowed each of the 12 on stage to address the impeachment inquiry against Donald Trump.

The House announced it was launching an impeachment inquiry at the end of September after it was revealed Trump pressured his Ukrainian counterpart to investigate Joe Biden and his son Hunter’s business dealings there.

Trade war should be ended by removing tariffs

Disney Plus’ The Mandalorian season 2 confirmed for fall 2020

Miss out on PS5 preorders? There’s one for sale on eBay...