The Blackhawks are taking to the skies once more.

DC fans have another new movie to look forward to, thanks to the news that Steven Spielberg will produce and possibly direct a Blackhawk movie. This means one of the oldest heroes in comics is returning to the big screen — yes, he’s been there before! — and under the guiding hand of one of the world’s most beloved filmmakers no less.

If you’re not familiar with Blackhawk or his team of elite fighter pilots, worry not. Here’s everything you need to know about the latest DC hero to get the blockbuster treatment.

Blackhawk is one of the finest pilots ever to take to the skies in the DC Universe, a mysterious hero known to most people only by his codename. After losing his family in World War II, this Polish Air Force officer swore vengeance against the Axis powers and formed a squad of like-minded fighter pilots called the Blackhawks. These heroes helped turn the tide of the war and became legends the world over. They continued to fight for freedom and justice after the war ended, building a legacy that survives into the present-day DCU. 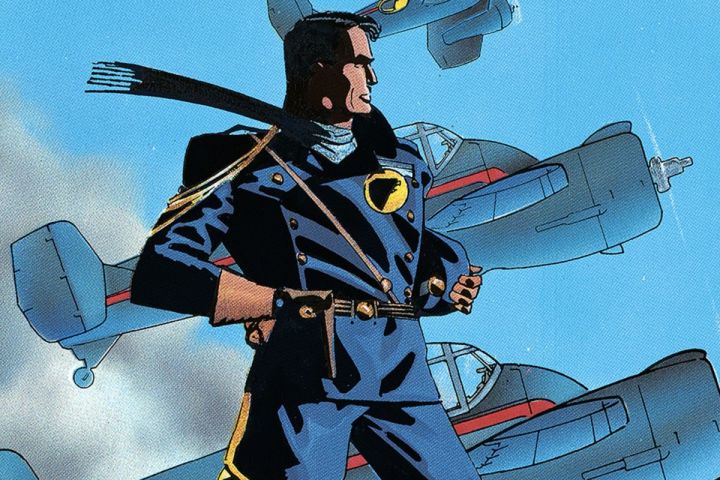 Neither Blackhawk nor his men possess any superhuman abilities, but they all rank among the best fighter pilots in the world. It helps that they all fly heavily modified Grumman XF5F Skyrocket planes, giving them an edge in battle and allowing the Blackhawks to quickly take off and respond to threats.

Each member of the Blackhawks has a unique set of skills. Blackhawk himself is a natural, commanding leader. His second-in-command Stanislaus is an acrobat and strongman. Chuck is the team’s communications expert, while Hendrickson is a gifted marksman and sharpshooter. Chop-Chop (later criticized as a racist caricature) is the team’s resident martial artist. And the relative rookie on the team, Lady Blackhawk, is a talented mechanic who redesigned the team’s equipment to make them an even deadlier force.

Blackhawk was created by Will Eisner, Chuck Cuidera and Bob Powell and debuted in 1941’s Military Comics #1. There’s been plenty of disagreement over the years as to which of these men was most responsible for developing the character, but most now regard Cuidera as the main driving force.

The three creators conceived of Blackhawk as a Robin Hood-like figure, operating outside the traditional military structure but actively contributing to the fight against Nazi Germany. The series also introduced recurring nemeses for the team in the form of villains King Condor and Killer Shark. Blackhawk and his team proved so popular that they were given their own solo series in 1944. That series regularly rivaled other bestsellers like Superman and Captain Marvel, especially as the popularity of the superhero genre began to wane after World War II.

The Blackhawks didn’t actually become a part of the DC Universe until 1956, when original publisher Quality Comics folded and the characters were licensed to (and later purchased by) DC. The series maintained its original numbering and creative team during that transition, though it did begin to evolve in other ways during the late ’50s and into the ’60s. Lady Blackhawk was added to the team, and their adventures began to take on a more science fiction-oriented tone. The series received a major overhaul in 1967’s Blackhawk #228, which emphasized the DCU connection and gave the characters new superhero alter-egos. Unfortunately, that overhaul proved unpopular with readers, and the series was ultimately canceled in 1968’s Blackhawk #243.

DC attempted to revive the Blackhawks several times in the decades that followed, but never with the same level of success. The series was briefly brought back in 1976 but canceled again a year later as part of the infamous “DC Implosion.” In 1982, editor Len Wein revived the Blackhawks in the wake of rumors that Spielberg was interested in directing a film adaptation. That revival restored the team to their roots as WWII-era fighter pilots, but it too faced sluggish sales. DC canceled the series again with 1984’s Blackhawk #273, the final installment in the long-running series.

Nonetheless, the company has continued to feature Blackhawk and his team in various stories, though usually as supporting players in books like Kingdom Come and Flashpoint. Lady Blackhawk has also become a recurring player in the present-day DCU, including taking on membership in the all-female superhero team the Birds of Prey. Most recently, DC introduced a new take on the Blackhawks in the miniseries Dark Nights: Metal, with Hawkgirl Kendra Saunders temporarily taking on the mantle of Lady Blackhawk.

Blackhawk first made the jump from comics in the form of a 1950 radio program, where he was voiced by Michael Fitzmaurice. In 1952, he was portrayed in a Blackhawk movie serial by actor Kirk Alyn (also the first actor to portray Superman in live-action).

Following those two projects, however, it would be a long time before Blackhawk made another non-comics appearance. A 1968 concept drawing suggests that Blackhawk was intended to appear as a supporting character in Filmation’s Superman/Aquaman Hour of Adventure animated series, but that never came to fruition. Blackhawk wouldn’t actually appear in animated form until the 2001 series Justice League. The episode “The Savage Time” featured the Blackhawks and various other WWII-era heroes. An elderly version of Blackhawk later appeared in the Justice League Unlimited episode “I Am Legion.”

The Blackhawks have occasionally appeared on Arrow and its spinoff series. The team has been re-imagined as a private security force called Blackhawk Security, though neither Blackhawk himself nor his specific team members have shown up yet.

Steven Spielberg was rumored to be directing a Blackhawk movie in the early ’80s. While that never happened, Spielberg is now attached to produce and potentially direct a new adaptation after wrapping work on Indiana Jones 5 and his West Side Story remake. Spielberg’s frequent collaborator David Koepp is currently writing the screenplay. It’s currently unknown whether the film will be set in the DC Extended Universe or not.

Where to Preorder the Coral Nintendo Switch Lite

Uber had 6,000 US sexual assault reports in two years

Facebook’s latest leak hints at unrest within the social network