The shooting broke out around 9.12am at Oshkosh West High School and the Oshkosh Police Department announced the incident on Facebook about an hour later.

In the incident a student armed with a weapon confronted a school resource officer in their office, leading the cop to fire at the pupil.

‘The student produced a weapon and stabbed the officer at which time the officer fired on the student, striking the student one time,’ Police Chief Dean Smith said in a press conference Tuesday afternoon.

Police did not offer specifics but described student as holding an ‘edged weapon’.

Both the student and the officer were hurt in the confrontation, police say, and transported to local hospitals. One trauma patient was transported to a trauma center in Neenah.

‘The student and officer were both injured and transported to local hospitals. Only one student was injured,’ the police department said, adding it is believed the injuries are not life threatening. 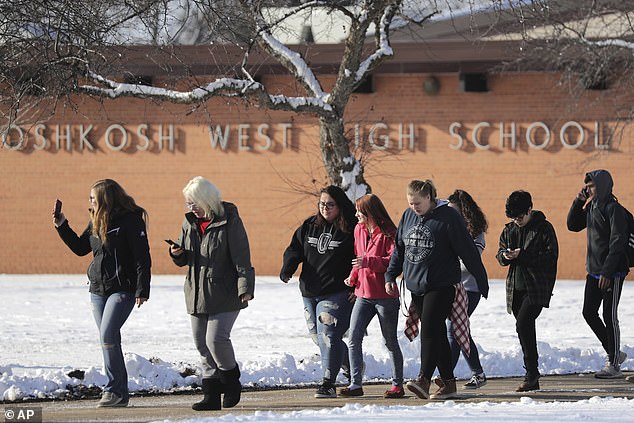 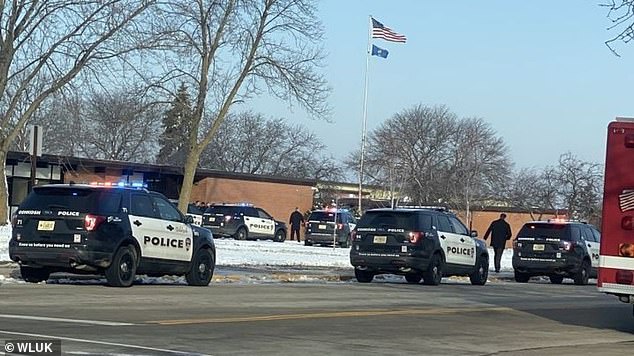 An armed student was shot by a school resource officer at Oshkosh West High School in Oshkosh, Wisconsin early Tuesday morning. Both the cop and student were injured in the incident and transported to local hospitals 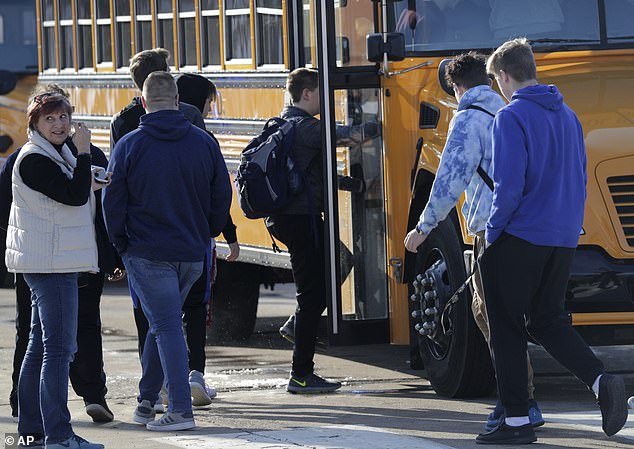 Following the officer involved shooting, students were evacuated. This is the second school shooting in a matter of two days in Wisconsin 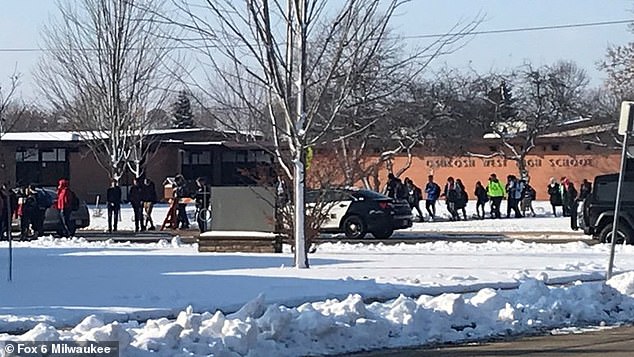 Students pictured evacuating the school after the shooting took place 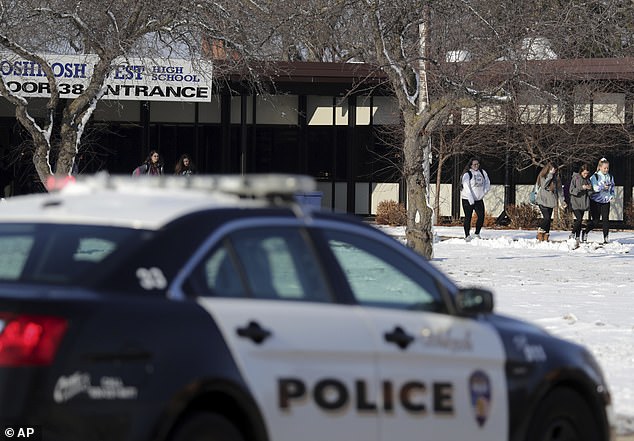 Cops arrived to the scene after the shooting broke out around 9.12am at Oshkosh West High School

No other pupils besides the armed student were hurt in the incident.

Oshkosh police said this is an isolated incident and believe there are no other suspects involved.

There were about 75 officers who arrived to the school after gunfire rang out.

According to the Oshkosh Police Department website, the source resource officer for Oshkosh West High is Michael Wissink. Police did not confirm whether Wissink was the cop involved in the shooting.

The school was placed on lockdown and evacuated and transported by bus to Perry Tipler Middle School, where parents are being told to reunite with their children.

The school was declared secure at 11.18am.

‘Our students’ safety is our number one priority. Today’s tragic event shows that trained school resource officers can help save lives,’ Dr. Vickie L. Cartwright, the Superintendent of the Oshkosh School District, said at the press conference.

School is cancelled for all Oshkosh area schools are on Wednesday.

‘We are on a lockdown, there were gunshots suspected near the school, and people have been taken away in an ambulance,’ student Dakota Meisel, who plays for the Oshkosh West football team, tweeted Tuesday morning 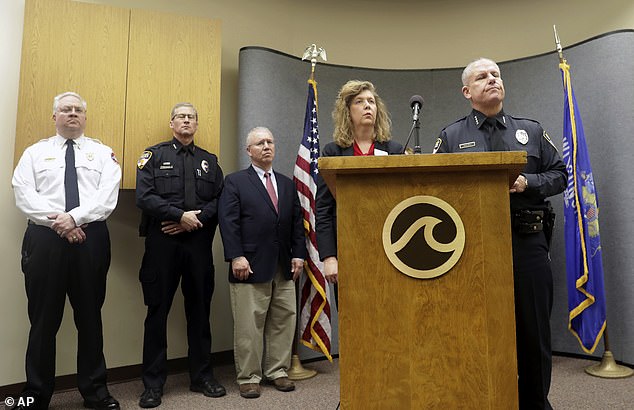 ‘The student produced a weapon and stabbed the officer at which time the officer fired on the student, striking the student one time,’ Police Chief Dean Smith said in a press conference Tuesday afternoon 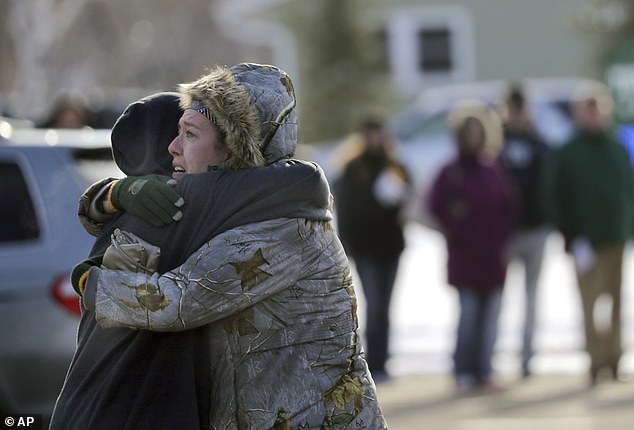 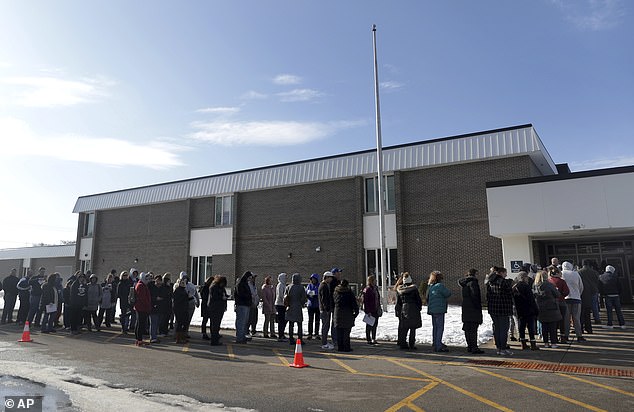 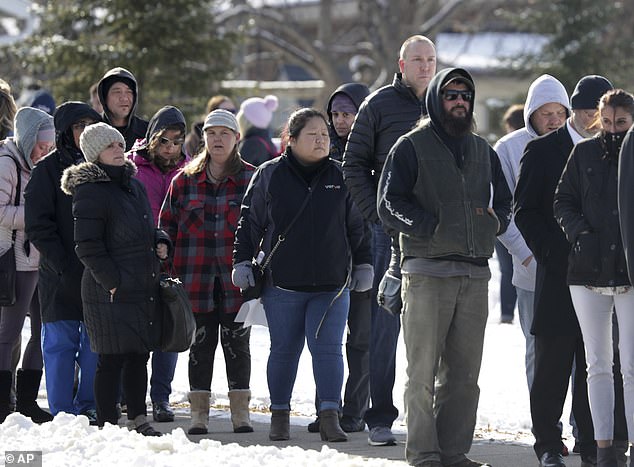 A student at the school tweeted about the shooting early Tuesday.

‘We are on a lockdown, there were gunshots suspected near the school, and people have been taken away in an ambulance,’ student Dakota Meisel, who plays for the Oshkosh West football team, tweeted.

‘I heard people yelling and running, and I heard a bang but not sure what the bang was,’ Meisel said to the Oshkosh Northwestern.

He said his teacher entered the classroom looking nervous and told the students to get into lockdown mode, just prior to the lockdown announcement. He said the students were scared.

‘We all got into the part of the room, closed all the doors, turned off the lights, and sat in the back of the class room quiet and we contacted parents and siblings, and waited until told what to do,’ he said.

Another Oshkosh West senior named Josh spoke on the chaos in the hallways that erupted after gunfire rang out.

‘I was walking in the hall, and a teacher shoved me into a classroom, and we started barricading the doors, and we all huddled in the corner, and there were gunshots,’ he said.

‘My teacher ran in the hallway to try and see what was going on. After she heard the people yelling and people were running through the hall, she shut all the doors and turned the lights off. After that an announcement came on that we were going into a lockdown,’ an Oshkosh West sophomore named Chloe said. 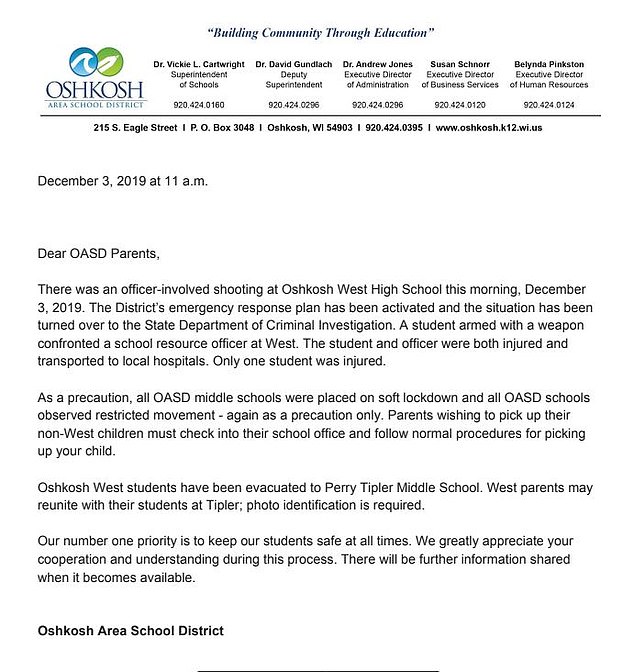 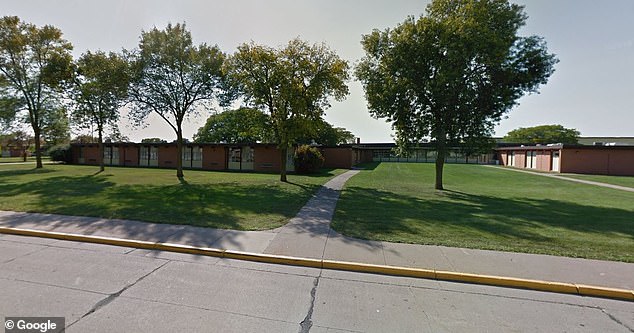 Parent Matt Crowe said he was impressed with the school district’s response to the shooting. He said parents were notified within 40 minutes of the shooting and where to pick up their children.

‘Having to stand out in the cold is the least of our worries,’ he said.

The Oshkosh Area School District confirmed the shooting in a statement.

‘There has been an officer-involved shooting at Oshkosh West High School. The school has been locked down. Students are being evacuated and transported to Perry Tipler Middle School,’ the statement said, as per WBAY.

On Tuesday morning the UW-Oshkosh  Police sent out a Titan Alert saying Oshkosh Police are investigating an ’emergency situation at a City of Oshkosh school.’

The incident has been turned over the state department of criminal investigations.

Oshkosh West has about 1,690 students from ninth to 12th grades.

There have been threats of violence at Oshkosh West in the past. 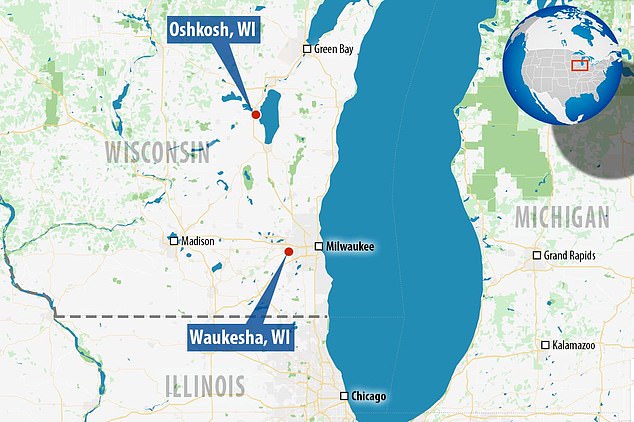 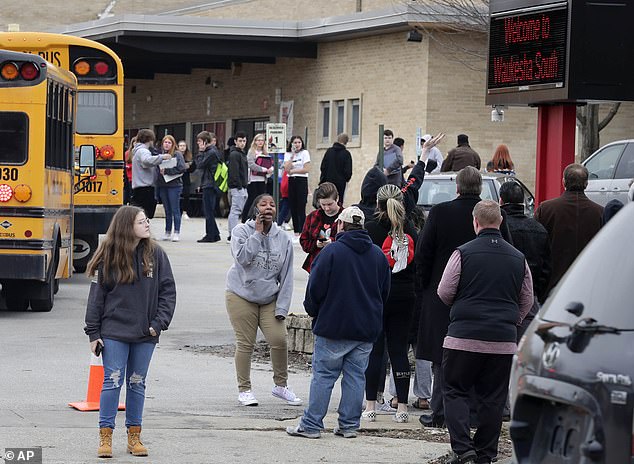 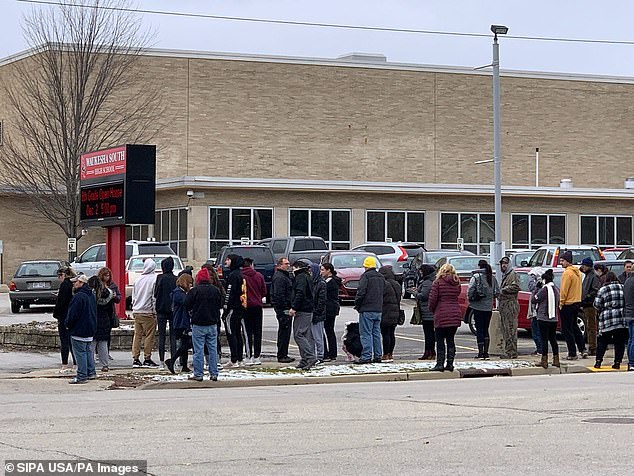 In January 2017 two teens were sentenced to several months in jail for making threats against Oshkosh North and West high schools two nights in a row. The threats led administrators to shut down the schools.

The schools were also the target of a bomb threat in September 2017, which forced officials to cancel classes.

The shooting comes one day after a similar incident in Waukesha, about 90 miles away from Oshkosh West High, on Monday.

The student was shot after the suspect refused to disarm and pointed his gun at officers around 10.17am.

The student was hospitalized after he was shot and is in stable condition.

The officer who shot the student is an 11-year veteran of the Waukesha police department.

Turns out you can be really creepy in six words or less. #SixWordHorror ...

Ryan Arcand, who was living on the streets when a video of him playing...

As fashion has its metaverse moment, one app looks to bridge real and virtual...

Microsoft will let you demo over 75 upcoming Xbox One games...