Wireless gaming mice have evolved rapidly in the past year thanks to improvements in battery and sensor technology, but even with all these advancements people still don’t want to have to remember to charge their mouse. Luckily, that’s a thing of the past as wireless charging has finally arrived, first in the form of Logitech’s PowerPlay system, and then with Razer’s HyperFlux, and now Corsair is entering the fray with its Dark Core RGB SE wireless gaming mouse (See it on Amazon) and MM1000 wireless charging mat (See it on Amazon). Just like the other systems that are available, you simply leave the mouse on the mat and it  charges, so you never have to think about it ever again. Let’s see how Corsair’s system fares against its rivals. 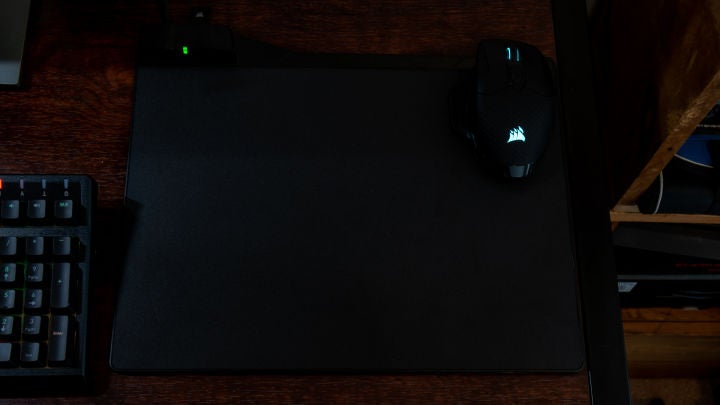 The Dark Core RGB SE mouse and MM1000 mousepad combined cost less than their competitors’ packages, with the mouse coming in at $89.99 and the mousepad going for $79.99. That sounds steep, but the HyperFlux and the Logitech G903 and charging mat are $249, so Corsair has a small price advantage.

After seeing the pricing you might be thinking you want the mouse, but not the pad, and that’s an option. Logitech also makes its mousepad an optional add-on, but with Razer the mouse and mat are only sold as a bundle. The Dark Core SE comes with a USB charging cable, so you can forego the MM1000 if funds are tight.

The mouse itself is a right-handed unit with swappable side plates, so you can customize the fit. As someone with big hands, I added the right-side piece to help keep my pinky from dragging on the mousepad, and found it quite comfortable. Removing it to swap it out with the default, non-winged piece is simple, as it’s held in place by magnets instead of something like plastic tabs.

The bottom of the mouse has an on/off switch, as well as a switch to toggle between 2.4GHz or Bluetooth connectivity. I really liked the option to use Bluetooth. As gaming laptops come down in price and continue to march toward desktop parity in power, being able to pair a gaming mouse via Bluetooth means one less dongle to keep (or lose) in your laptop bag.

There are nine buttons on the Dark Core SE, and all but the left click are customizable using Corsair’s CUE software. The palm rest has a textured surface that follows onto the wings of the mouse, and feel quite pleasant to the touch. The right and left mouse buttons have a great clickiness to them, but I didn’t like the feeling of the rest of the buttons. They just felt mushy.

The mousepad has a passthrough USB 3.0 port…

Directly behind the scroll wheel is a button for quickly switching between up to three custom profiles, so you can easily toggle between different DPI, RGB, and button assignment settings. To the left of the left-mouse button along the edge are the DPI up-and-down buttons. A series of three LEDs below them, on the left side, let you know at a glance if the mouse’s DPI is at high, medium, or low.

Directly behind the DPI indicator lights on the left-side of the mouse are three customizable buttons, usually setup as forward, backwards, and one in the center for “sniper” mode where it adjusts DPI as long as it’s held down. You can customize them to your liking, however.

When it comes to charging the mouse, it’s not as simple as it is with both Razer and Logitech’s systems. On those wireless charging pads you can put the mouse anywhere, and indeed it charges while you’re using it wirelessly. With the Dark Core RGB SE, you have to make sure it’s positioned over the charging “area,” which is denoted by a series of small circles on the upper right-hand corner of the pad. It’s surprisingly unforgiving, too. If you don’t have it just right, it won’t charge. The only indicator it’s charging is an LED on the mousepad. If it’s not glowing, your device isn’t getting a charge.

…maybe the coolest accessory with the MM1000 charging mousepad is the USB adapter.

Since Corsair’s uses Qi wireless charging, it can be used by basically anything that can be charged wirelessly. I dropped my phone over the mousepad and it instantly went into charging mode, just like it would on any other wireless charging pad. Corsair also includes a small, plastic adapter along with USB-C and Lightning connectors so you can plug in older phones and have them charge wirelessly on the mat. I have a USB charger for my 3DS and decided to see if there was enough juice coming from the mat to charge it, and I was surprised to see the orange light come alive on the front of my beloved Nintendo handheld.

The mousepad itself is a hard plastic, allowing for fast mouse movements. Both Logitech and Razer’s HyperFlux pads have two different surfaces, soft and hard, depending on your preferences. No such choice is afforded by the MM1000.

I’m not a fan of Corsair’s CUE software. I like to rebind the forward and backward keys to swap weapons in PUBG, and while creating profiles for games is easy, but the process of rebinding doesn’t make sense. With Razer’s Synapse, you choose the button you want to change, choose the key to bind it, and hit save. With CUE, you have to “create action” with a small plus symbol between the actions dialogue and the device image, then you choose which button you want to assign the action to. Then you use a pulldown menu to choose whether you want to assign a macro, remap a key, open applications, and other options. Once remap is picked, you choose keystroke, mouse button, or typing key, and then you have to pick which keyboard section the key resides in: A-Z, numbers and symbols, function keys, and more. It’s overly complicated and unintuitive. Once you figure it out, it opens up tons of options, but if Google is any indicator, I’m not the first person who couldn’t figure out how to remap a key just by looking at the CUE software.

Other adjustments in CUE aren’t nearly as cumbersome. Changing lighting effects on the mouse, adjusting DPI, and performance options like angle snapping and lift-off distance are much easier to figure out. Surface calibration is easy and kind of fun, requiring you to drag a cursor in circular motions at a certain speed so the mouse is tuned to the mousing surface. Overall the software has a lot of features, but just isn’t the most intuitive.

When it comes to gaming, the Dark Core SE doesn’t disappoint. At no time did I feel like I was losing matches because of input lag. On the contrary, some of my best team performances in PUBG happened while I was testing it.

The freedom wireless affords goes beyond just being bound to your computer. The lack of a cord meant it never got it snagged on the edge of my desk during quick movements, something I didn’t even realize was happening before I went wireless. It’s fast, accurate, and liberating, and I don’t think I want to ever go back to a wired mouse for gaming.

On the fly DPI switching is a convenient feature I almost never use, but I tend to prefer a faster mouse movement outside of gaming, so having the ability to easily switch back and forth is a welcome feature. Sniper mode, too, is great for those moments when I wanted to drop the DPI way down to get a precision kill.

Ergonomically, I loved using the Corsair Dark Core SE. I tend to switch between claw and palm grip depending on the situation, and it’s a joy to use no matter how I held it. It glides effortlessly across the mousepad, and the two winged sections kept my pinky and thumb from dragging on the mouse pad too.

There were a few things about this combo that I didn’t like, however. First, the side buttons were prone to accidental clicks in my testing. In PUBG, I map the 1 and 2 keys, located on the left side of the mouse, to forward and backward mouse buttons. and I really had to stretch my thumb to reach them both. I also found myself clicking the sniper button in the middle of them when I wanted to change weapons. Since quick swapping of weapons can mean the difference between a kill or defeat, I didn’t like the spacing or the feel of the buttons. I actually compromised by mapping the 2 key to the sniper button, so I didn’t need to move my thumb quite as much.

There’s also no way to tell what your current battery life is without opening up the CUE software, and since you can’t charge it while using it like you can with the Razer and Logitech systems I always had to check before using it just to make sure. Corsair says the mouse can last for 24 hours on a full-charge though, so you should be good to go if you just leave it on its spot over night, and never turn your PC off. There is an option to connect a cable to charge it, or if you just want to use it in “wired” mode, but that kind of defeats the purpose of it.

The Dark Core SE and MM1000 works well for gaming but falters in its charging system. Being able to charge it wirelessly from the MM1000’s Qi charging point is a great feature, but you can’t use the mouse while it’s wirelessly charging. Factor in the confusing CUE software and the set is a bit less attractive than the alternatives.

Best High-End Gaming Headset 2020: The Absolute Best You Can Buy

On the 17-year anniversary of Dale Earnhardt’s death, @austindillon3 returns the…

An all-star group of actors is in the running to play Elvis Presley in...