Hash and Tag Media
Home Gaming Domino Explained: Who Is the Deadpool 2 Character?

The X-Men character is a deadly assassin with impossibly good luck.

Deadpool 2 adds several big guns to Fox’s X-Men cinematic universe. Literally, in the case of Cable and his arsenal. But Cable and Deadpool will also be joined by another X-Men mainstay, Domino. Zazie Beetz (Atlanta) plays the deadly mercenary.

While Domino may be familiar to many comic fans, the character is only just starting to make her away into other media. So to help get you up to speed on all things Domino, here’s everything you need to know about Deadpool’s new partner.

Neena Thurman is a mutant with a particular set of skills, skills that make her a nightmare for pretty much anyone who gets in her way. Her origin story is similar to X-23’s in many ways. She too was raised in a lab by scientists trying to design the perfect mutant super-soldiers, and she was also rescued from a life of servitude by her mother. But despite being given a second chance, it wasn’t long before Neena channeled her mutant powers and incredible marksmanship into a career as a mercenary.

Domino spent the early part of her mercenary career as a member of a bloodthirsty group called The Six Pack. However, after meeting Cable, Domino was pulled back into the light and became a member of his X-Force team. Domino has remained closely involved with both Cable and X-Force ever since, serving on many incarnations of the team over the years. She’s also shared romantic relationships with both Cable and Wolverine. She may have too hard an edge to work as a normal X-Man, but Domino continues to fight for mutantkind in her own way. 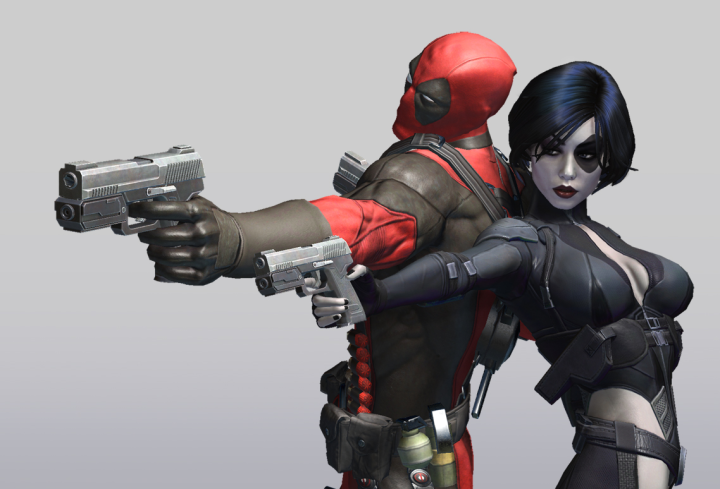 Domino will be joining the Merc with a Mouth in Deadpool 2.

Domino is similar to Black Cat and Longshot in that she has the power to alter probability, giving herself good luck in battle and her enemies bad luck. Her power isn’t magic-based. Instead, she has a low-level brand of telekinesis that allows her to subconsciously affect the environment around her. For example, she can alter the trajectory of bullets to improve her already impeccable aim while simultaneously ensuring that anyone shooting at her always misses. This power also enhances her reflexes and reaction times to superhuman levels.

Domino’s government handlers discarded her after deciding her powers weren’t impressive enough, but they’ve certainly served her well in her mercenary career. It’s often hinted that Domino has yet to truly tap into the full potential of her abilities. In one case, she managed to subdue a fleet of Sentinels by altering the atmosphere and summoning a thunderstorm. Were she ever to to perfect her mutant luck power, Domino might rank among the most powerful superhumans on the planet.

It’s often hinted that Domino has yet to truly tap into the full potential of her abilities.

Domino was created by writer Fabian Nicieza and artist Rob Liefeld. She actually made her debut in the same comic as Deadpool, 1991’s New Mutants #98. Both characters appeared during a time of great transformation for the X-Men comics. Like a lot of comics at the time, the X-Men were becoming darker and more violent, and characters like Domino and Deadpool embodied that transformation. Domino represented a new kind of mutant hero who wielded guns in battle and preferred to eliminate the enemies of mutantkind rather than seek peace and understanding.

Domino became one of the founding members of X-Force when Marvel launched the new series a few months after her debut. Cable and his team quickly established themselves as a more militant alternative to Xavier’s X-Men. That approach clearly struck a chord with readers, as X-Force #1 remains one of the highest-selling comics ever published.

The funny thing about Domino is that her first true appearance didn’t occur until a year later. 1992’s X-Force #8 revealed that Domino had been kidnapped and replaced by an impostor named Copycat. The Domino readers had encountered up until that point was a fake. Following that twist, however, the real Domino joined the team, and even became its leader for a while after Cable disappeared.

Domino hasn’t had a particularly robust career outside of the X-Men comics, but that’s clearly changing now that she’s about to make her live-action debut.

Like many of her fellow X-Force comrades, Domino made a number of cameo appearances in X-Men: The Animated Series (voiced by Jennifer Dale). She enjoyed a meatier role in 2009’s Wolverine and the X-Men, where she was voiced by Gwendoline Yeo and appeared as a member of Magneto’s Brotherhood of Mutants in the present and as part of Xavier’s resistance group in the show’s future timeline.

But obviously it will be Deadpool 2 that truly takes Domino to a new level. How she and Cable will fit into the zany big-screen universe of that character remains to be seen, but it will likely be a lot of fun finding out.

Trillions are at stake in the retirement wars, and Vise nets $14.5M from Sequoia...