Real Housewives of New York fans are calling for stars Dorinda Medley and Sonja Morgan to be fired after the pair were heard making ‘offensive’ and ‘transphobic’ comments about a transgender model at a New York Fashion Week show.

In a video posted to Instagram by Dorinda, 54, she and Sonja, 55, could be overheard discussing model Yasmine Petty’s body as she walked down the runway at the Garo Sparo show on Tuesday, with Dorinda saying: ‘Well with a body like that, it’s a guy. That’s a guy.’

As Yasmine walks past the pair, who were seated on the front row with castmates Luann de Lesseps and Ramona Singer, Sonja then responds in agreement, adding: ‘With a body like that, it’s a guy, you’re absolutely right.’ 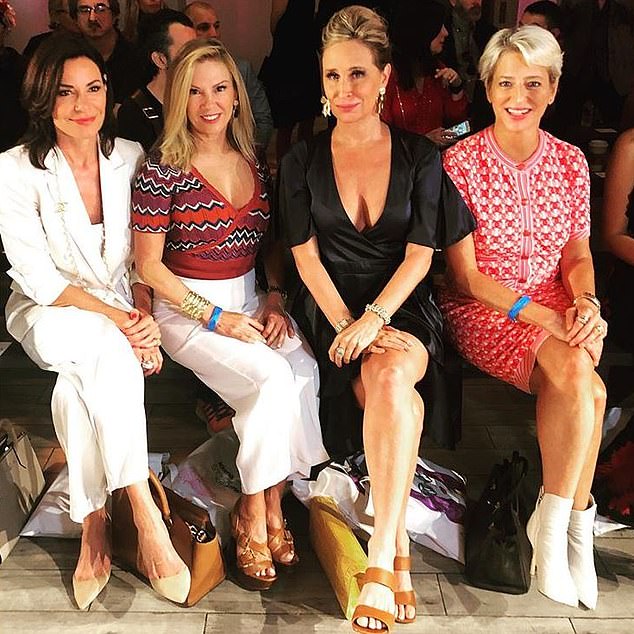 Slammed: Dorinda Medley (far right) and Sonja Morgan (center right) are under fire for making ‘transphobic’ comments about a trans model at the Garo Sparo show on Tuesday 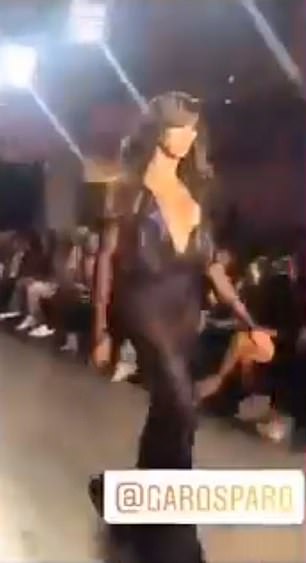 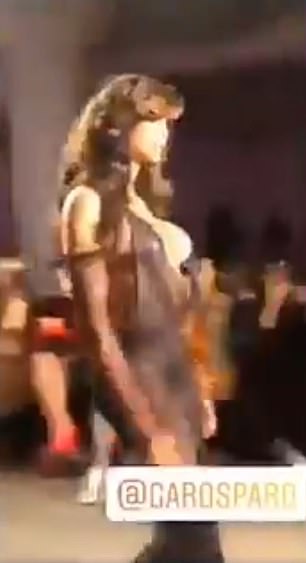 ‘Disgusting’: In an Instagram Stories video posted by Dorinda, 54, the women were heard discussing the body of trans model Yasmine Petty, 31, as she walked the runway (pictured) 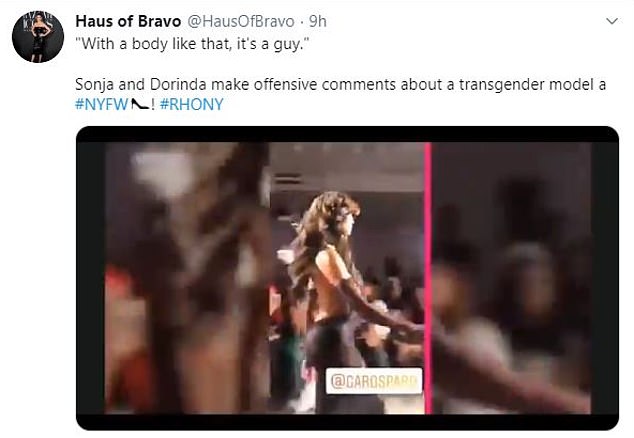 Outrage: The video was quickly deleted from Dorinda’s Instagram, but was quickly shared by a number of other social media accounts, where the women were slammed by RHONY fans

In another video posted to Sonja’s Instagram, the women were heard making similar comments about drag queen Miz Cracker, who also walked in the show, with Sonja heard asking Dorinda, ‘Who is that? Oh that’s a guy, right?’

The two women can also be seen talking loudly and laughing as Yasmine walked down the runway in another video that was shared on the model’s Instagram Story; in that clip, Yasmine appears to glance over at the pair, prompting Dorinda to smile at her, while Sonja kicks up her feet – seemingly out of embarrassment – before the duo starts laughing again. 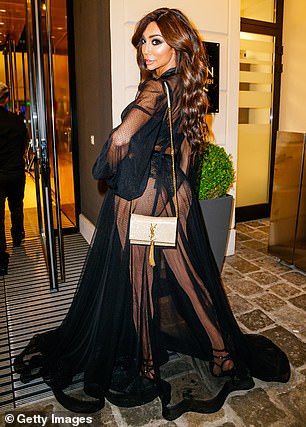 Speaking out: After the show, Yasmine revealed that she had heard the women making comments as she walked the runway

Dorinda’s clip was hastily deleted from her Instagram account – but not before it was shared on countless social media pages, where the RHONY stars faced hundreds of comments from outraged users, many of whom called for the pair to be fired from their hit Bravo show.

Despite the backlash, both women also posted a front row photo from the show on their respective Instagram accounts, where followers promptly flooded the comments section with criticism, labeling the reality stars ‘disgusting’, ‘offensive’ and ‘transphobic’.

‘How could u say something so disrespectful & petty?’ one person wrote on Twitter, while tagging Dorinda.

‘I honestly thought u were an ally 2 us all, not just “the gays” u so lovingly claim.

‘This is just further proof that u shouldn’t ever meet ppl u look up to…they always disappoint u.’

‘It is amazing to me, how you love your gays when they are partying with you, but the real truth comes out, when you are sitting beside your fellow housewife Dorinda, making homophobic and transphobic remarks about Yasmine Petty and one of the drag queens,’ a hairstylist wrote on Sonja’s Instagram.

‘Your words were disgusting, insensitive, and hurtful… you should be ashamed of yourself! As far as I’m concerned new york housewives are CANCELLED! And, to know you come to my salon and get your hair colored by a fellow colorist who is also gay baffles my mind.’ 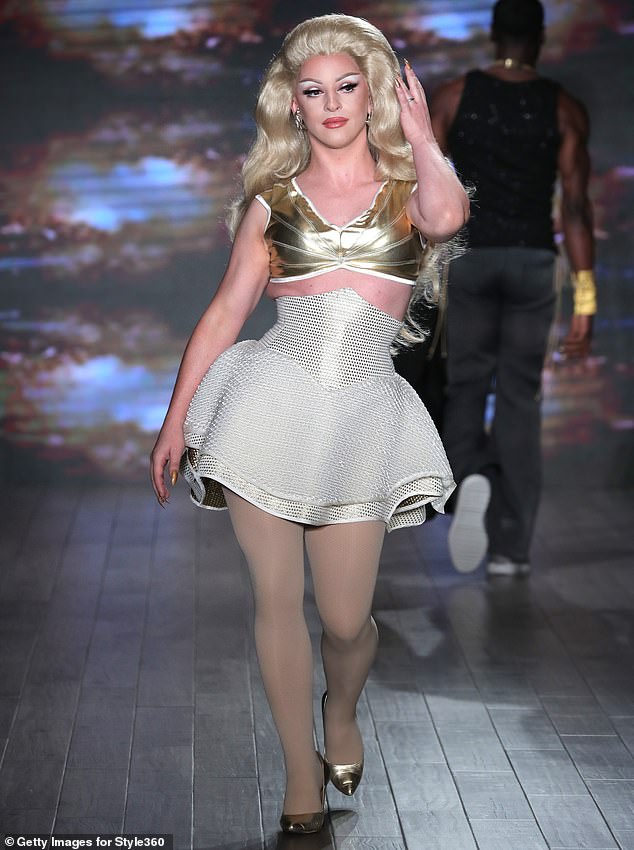 Critique: The women were also overheard making comments about drag queen Miz Cracker (pictured), with Sonja questioning whether the model ‘is a guy’ 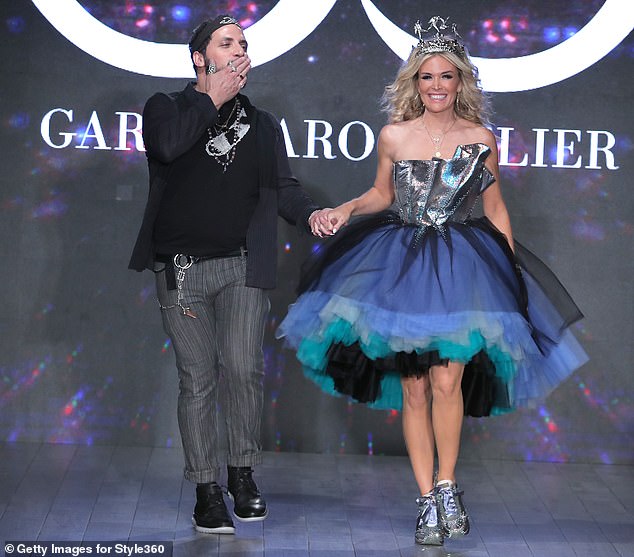 Support: It is thought that the RHONY stars attended the Garo Sparo show in order to watch their castmate Tinsley Mortimer, who made an appearance on the runway

‘I’ll never ever watch this show again,’ another threatened. ‘@bravoandy should fire both of you immediately. You would be so easily replaced that it’s laughable.

‘@yasminepetty has more courage than you could ever imagine.’

Others also accused the women of hypocrisy, blasting them for claiming to be supporters of the LGBTQ community, while making those kinds of comments about transgender people.

‘SHAME on you & your transphobic comments!!’ someone else chimed in. ‘SO disgusting and SO rude, you should be ashamed with yourself.’

‘Sorry to hear about the transphobic remarks you made earlier today—thought you were one of the good ones,’ one commenter wrote.

‘To know that you’re so unaware of what you’re saying about Trans people, especially during a period where your show is filming is so disappointing,’ someone else said.

‘In an avenue and climate of time where women can show solidarity and respect you and your cast mates continuously disappoint. Woman are beautiful and you should remember that you were at the woman’s march and mind your manners.’

A number of people tagged Real Housewives executive producer Andy Cohen in the their posts, calling for the TV host – who is openly gay – to take action and reprimand the reality stars for their insensitive comments. 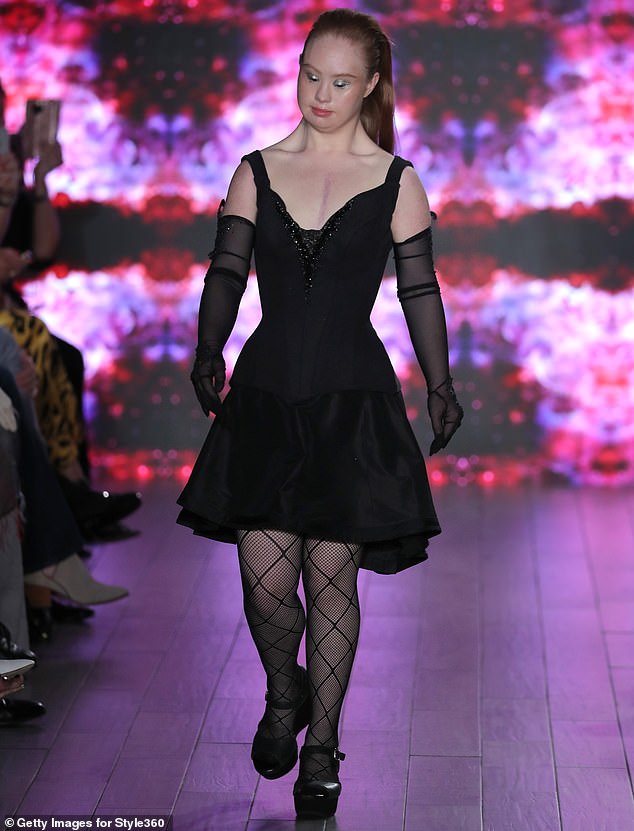 Runway star: Australian model Madeline Stuart, who has Down syndrome, also strutted her stuff on the catwalk

In an interview with Page Six after the show, model Yasmine, 31, revealed that she heard Dorinda and Sonja making their comments as she walked down the runway, noting that she found their behavior ‘disheartening and disappointing’.

‘I was really excited to do the fashion show for Garo Sparo for New York Fashion Week because he was using models of diversity,’ she said.

‘It’s pretty disheartening and disappointing, especially this day in age and being in New York City.’

Yasmine went on to note that ‘people can’t choose their sexual orientation’, but that people can choose ‘not to be rude and cruel’.

Sonja and Dorinda hastily issued an apology in the wake of the controversy, telling Page Six: ‘We have a history as long-standing supporters of the LGBTQ community in many ways and apologize for our offensive comments at the fashion show.’

Interestingly, in another clip from the Garo Sparo show that was posted to Sonja’s Instagram Stories, one of the women can be heard remarking: ‘I love how diverse this show is.’

The ladies have shown very public support for the LGBTQ community in the past, with both Dorinda and Sonja attending New York’s Pride Parade in June, alongside several other cast members from the Real Housewives franchise – and Andy.