As his latest film Rampage hits, we break down Dwayne “The Rock” Johnson’s 10 best roles.

Dwayne “The Rock” Johnson has been keeping as busy as ever lately, starring in epic blockbusters like The Fate of the Furious, comedies like Baywatch and Jumanji: Welcome to the Jungle, and now the video game adaptation Rampage.

With Johnson’s resume growing bigger than his massive biceps, we figured it was time we updated our countdown of his 10 best films again. From The Scorpion King to the Fast & Furious franchise to Moana, these are the best films with which to get your Rock on. 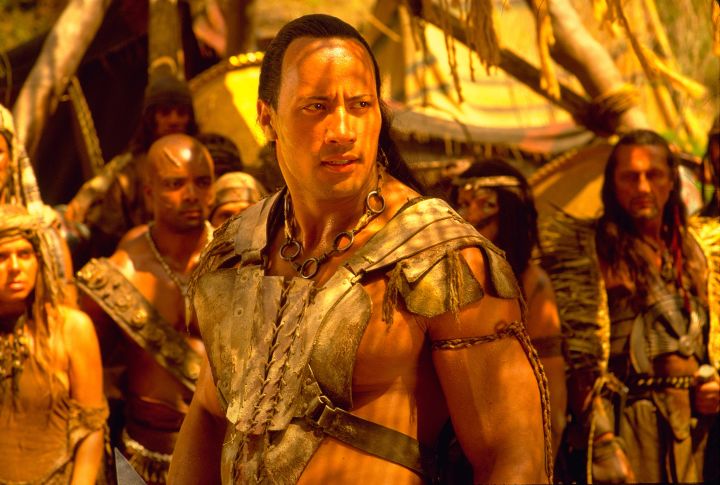 Much of the marketing surrounding The Mummy Returns centered on The Rock’s big screen turn as a villain even an immortal mummy fears – the Scorpion King. Johnson wasn’t actually in the movie for more than five minutes or so, most of which involved a poorly crafted CG monster with his face plastered on top.

But Johnson quickly made up for that letdown by appearing in the spinoff movie The Scorpion King. This prequel aims to explore how a simple Akkadian mercenary rose to become a king of men, a conqueror of kingdoms and a doomed soul. That was the original intent, anyway. The Scorpion King is largely disinterested in connecting to the larger Mummy mythology, instead focusing on that franchise’s comedic aspects and offering Johnson and his comely sidekick (Kelly Hu) one big action scene after another. In other words, it plays directly to Johnson’s strengths as an entertainer.

The Scorpion King isn’t ambitious or story-driven or even very original, but it is plenty of fun. And it spawned a franchise of direct-to-video sequels where several of Johnson’s WWE colleagues have continued the saga in his place.

We doubt many people were expecting G.I. Joe: The Rise of Cobra to be a critical success. That said, did it really have to take so many liberties with the property and the colorful, ongoing battle between the Joes and Cobra? Luckily, the sequel did a much better job of satisfying hardcore Joe fans and tapping into what made the old cartoon and comics so great, even if it still didn’t win over many critics.

Though clearly a direct sequel, Retaliation ditched many of the characters from Rise of Cobra in favor of a smaller, revamped cast. Leading the charge is Johnson as Roadblock, the tough-as-nails soldier who speaks loudly and carries a big gun. Johnson’s chemistry with the rest of the cast, including Channing Tatum’s Duke and Bruce Willis’ Joe Colton, is enough to wipe away the bad taste of Rise of Cobra’s lousy dynamics. If anything, it’s disappointing that the brotherly rivalry between Roadblock and Duke doesn’t play a bigger part in the movie.

The future of the Joe franchise on the big screen is very much up in the air right now, and we can only hope Paramount continues to rest the franchise firmly on Johnson’s burly shoulders.

You can’t throw a rock (no pun intended) these days without hitting a film starring either Dwayne Johnson or Kevin Hart. It was inevitable that the two would eventually share the screen in an action comedy. We’re just fortunate that the two have such great chemistry together.

On paper, Central Intelligence is nothing terribly unique. It’s a pretty textbook buddy cop movie about two high school friends who reconnect as adults to take down a wanted criminal. Fortunately, Johnson and Hart elevate the film into something more. Their energetic performances and the nonstop physical comedy that comes with their extreme size difference go a long way. Central Intelligence may not reinvent the genre, but it’s a real crowd-pleaser.

Perhaps no Hollywood genre is as familiar and formulaic as the sports movie, especially football movies. And like the superhero genre, no action star’s resume is truly complete until they appear in at least one tale of an underdog team rising to the challenge and finding glory on the field.

Gridiron Gang was a pleasant surprise in 2006 because it succeeded better than most in rising above the usual tropes. As with most of these films, it’s based on true events, in this case the story of Sean Porter (played by Johnson, of course). The movie follows Porter as he creates a football league at his youth detention center, offering at-risk teens the chance to learn a little discipline and rise above their troubled upbringing.

Gridiron Gang works because it avoids many of the obvious beats. It doesn’t present a white-washed, melodramatic view of race relations in the vein of Remember the Titans. It doesn’t Hollywood-ize the struggle of the teen characters. Johnson himself enjoys one of his first purely dramatic turns in the movie. While it made strong use of his natural charisma, Johnson also delivers a nuanced performance that emphasizes humor and honesty as much as it does football-fueled intensity.

The Rock doesn’t star in this send-up of various ’80s and ’90s buddy cop movies, but his supporting role (as well as the movie itself) is so memorable that it’s worth an inclusion anyway. The Other Guys stars Will Ferrell and Mark Wahlberg as two dorky, inept cops jealous of the high-octane antics of the resident super-cops on the squad (played by Johnson and Samuel L. Jackson). The Johnson/Jackson partnership proves to be a winning one from the opening credits, as they pursue criminals through crowded city streets and cause a mountain of collateral damage before bringing them down.

Ultimately, Johnson is just one small part of an ensemble cast that included everyone from Michael Keaton to Steve Coogan. Even so, The Other Guys stands as one of the strongest of his many action/comedies.

Fall Guys: How One of its Hardest Minigames Was Built, From Start to Finish

Valve’s Steam Link is dead, and that sucks