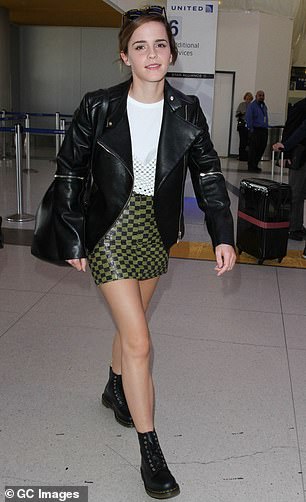 Harry Potter actress Emma Watson has been named by researchers as a greenhouse gas ‘super-emitter’.

Miss Watson, the only Briton on the list, had the tenth worst environmental impact out of the group of celebrities selected, based on their social media accounts.

She flew 14 times in 2017 and travelled 42,253 miles, all on scheduled airlines, spending 71 hours in the air, the researchers calculated.

Her carbon footprint from flying alone was 15.1 tons of CO2 – three times that of the global average from all activities.

In her work as a United Nations spokesman, Miss Watson has called for everyone to help the world achieve the UN’s 17 global goals – which include ending extreme poverty, fighting inequality and stopping climate change.

While promoting her film Beauty And The Beast, she supported wearing dresses made out of recycled materials.

Topping the list of celebrity greenhouse gas super-emitters was Microsoft billionaire Bill Gates, with a whopping carbon footprint of more than 1,600 tons of CO2. 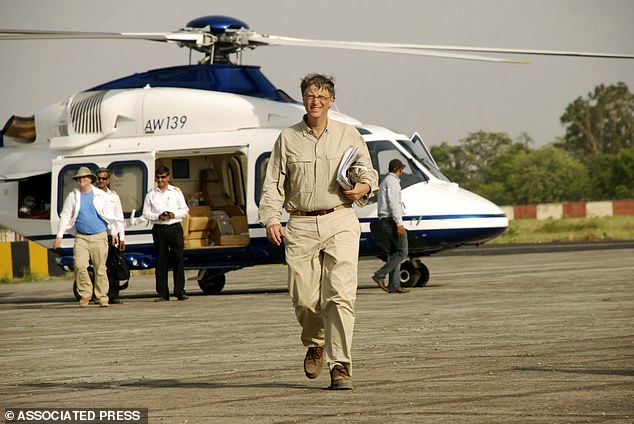 Swedish academics analysed the carbon footprints of ten famous people who travel the globe, with Bill Gates (pictured) topping the list with carbon footprint of more than 1,600 tons of CO2 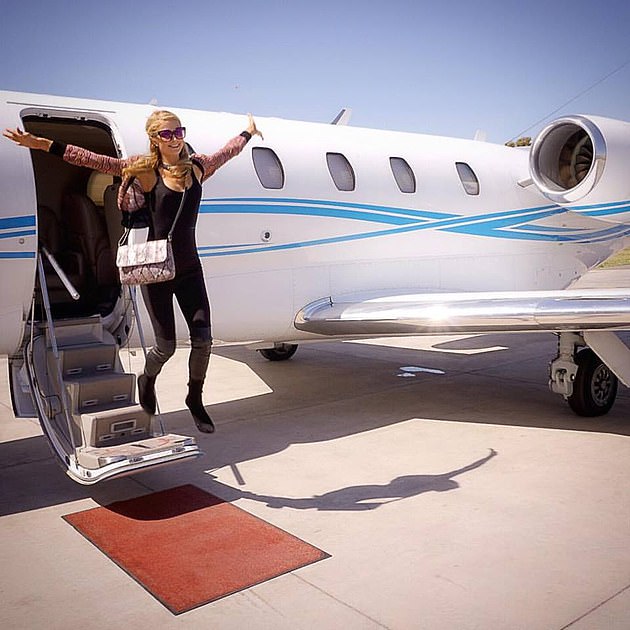 Second was socialite Paris Hilton (pictured), who flew 171,346 miles by various private jets, emitting more than 1,260 tons of CO2 in the process

The Microsoft founder has previously described private jets as his ‘guilty pleasure’, but has written numerous articles lecturing people about their use of transport and other greenhouse gases.

Second was socialite Paris Hilton, who flew 171,346 miles by various private jets, emitting more than 1,260 tons of CO2 in the process.

Among the other top polluters are Jennifer Lopez, who flew 139,520 miles, Oprah Winfrey, who clocked up 83,356 miles and Facebook founder Mark Zuckerberg, who accounted for 65,888 miles.

Zuckerberg has also repeatedly stressed the importance of multinational companies like his being mindful of their environmental impact.

He wrote in 2015: ‘Solving the clean energy problem is an essential part of building a better world.

‘We won’t be able to make meaningful progress on other challenges—like educating or connecting the world—without secure energy and a stable climate.’

Singer JLo, who has 103million followers on Instagram, recently re-tweeted fellow actor Leonardo di Caprio, with an image of the burning Amazon rainforest saying: ‘The lungs of the Earth are on fire’.

The pair asked what ‘you can do’ to combat climate change, urging people to be ‘conscious consumers’.

Ms Lopez regularly takes private jets and was pictured boarding one with her young daughter in 2017. 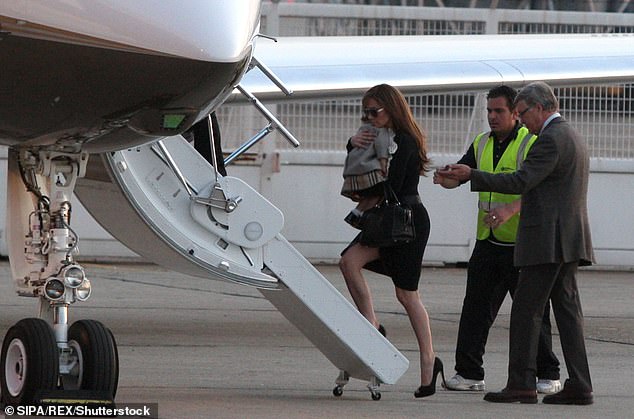 Meanwhile US chat show host Oprah Winfrey has endorsed former US vice president Al Gore’s Oscar-winning documentary an Inconvenient Truth about the damage we are doing to the planet.

She said that ‘everybody’ should go and see the film, which urges people not to ignore climate change. 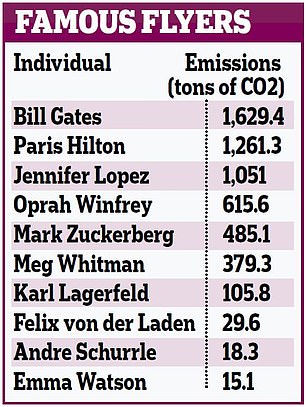 The ten famous flyers identified by researchers in Sweden

Former Hewlett Packard CEO Whitman has described climate change as ‘one of the world’s most complex challenges’.

In 2016 she said HP was backing the Paris Agreement and ‘uniting to solve the world’s toughest challenges’.

The late Karl Lagerfeld, known for adoring his cat Choupette, once admitted taking her on-board a private jet.

Asked whether his feline friend had ever travelled in a private plane, he replied: ‘Yes, why not?’

For his autumn-winter collection with Chanel in 2011 he sought to highlight climate change by having models walk down the runway among real melting icebergs.

The figures, published in the journal Annals of Tourism Research, are estimates for 2017 based on the celebrities’ pictures and posts on their social media accounts such as Twitter and Instagram, so may not cover all their travel, the academics admit.

The teenage climate change activist has resolved not to fly, showing that celebrities do not need to leap on jets so frequently, he said.

Miss Watson, one of only three on the celebrity list to stick to scheduled air travel, supports environmental projects to compensate for her jet-setting.

A spokesman for the actress said: ‘Emma pays to offset all of her air travel carbon emissions through ClimateCare.org.’

Supreme Court Justice Ruth Bader Ginsburg dies at 87: ‘She fought for the unheard’

Looks like a third fight between Tyson Fury and Deontay Wilder is not too...