A pair of Florida businessmen who worked with Donald Trump lawyer Rudy Giuliani to promote politically charged investigations in Ukraine were arrested on federal campaign finance charges, it was revealed Thursday.

The two men cultivated ties with a series of top Republican officials. They had dinner with President Trump and Donald Trump Jr. in 2018, and Parnas bragged about dining with the president at the White House that year.

Giuliani has said both are clients of his. In an indictment unsealed Thursday in the Souther District of New York, the men are accused of funneling hundreds of thousands from a mystery Russian businessman into a pro-Trump super PAC in violation of U.S. campaign laws banning foreign donations and efforts to conceal campaign funds. 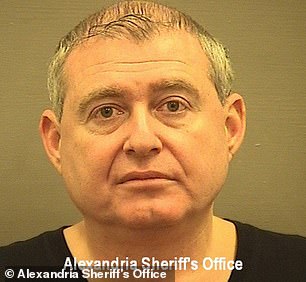 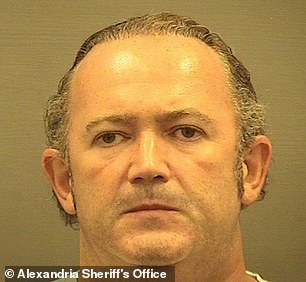 In addition to helping Trump, the same super PAC spent millions to boost former Texas GOP Rep Pete Sessions, who wrote a letter calling for the firing of former U.S. ambassador to Ukraine Marie Yovanovich, who Trump trashed on his infamous July call with the Ukrainian president and who House Democrats want to interview Friday as part of their impeachment probe.

The House Intelligence committee wants both men to testify about their work with Giuliani in Ukraine as part of its impeachment probe into Trump’s interactions with Ukraine. Their lawyer has said they won’t provide the information. Amid the standoff, three House committee’s issued subpoenas for interviews and information.

The men were arrested late Wednesday at Dulles airport in Virginia, according to press reports. 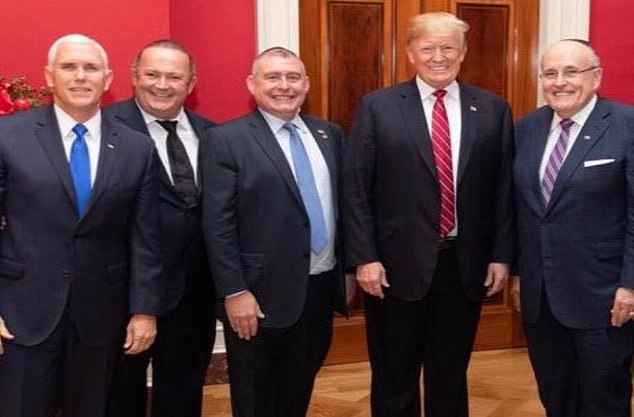 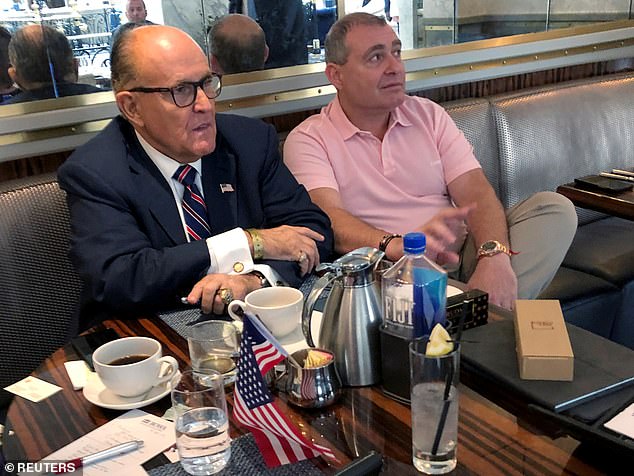 The pair donated $325,000 to a pro-Trump super PAC, America First Action, through an LLC, the Wall Street Journal reported, and they are expected to appear in court in Virginia Thursday.

Although the indictment mentions only an alleged scheme to violate campaign finance laws, the two men are also connected to a the sprawling Ukraine matter that has President Trump now facing a ramped-up House Democratic impeachment effort.

The Associated Press reported that the two men sought to use their connections to Giuliani to get the Ukrainian state gas company, Naftogaz, to replace members of their board of directors. 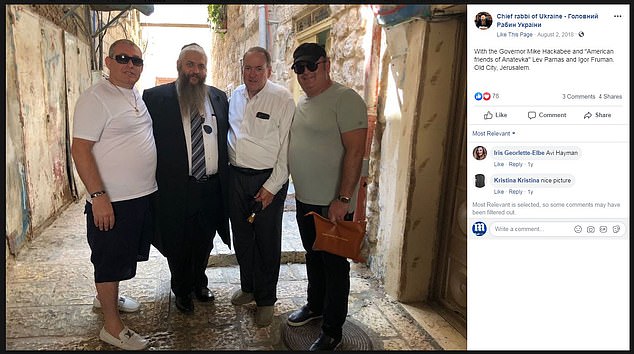 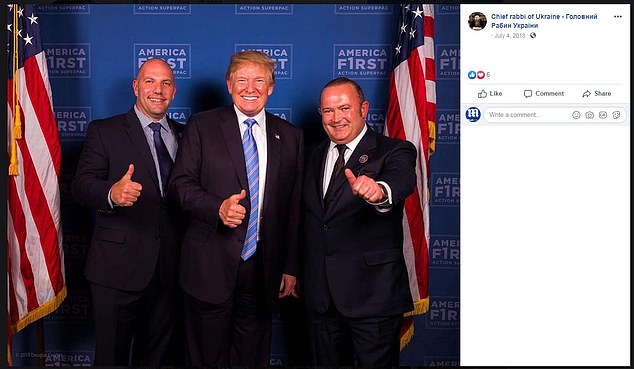 An unidentified man, President Trump, and Igor Fruman on July 4, 2018

The pair dined with Donald Trump Jr. in May 2018, along with Tommy Hicks Jr., according to a Facebook post that captured the event. Hicks was leading the pro-Trump super PAC at the time and now has a position as co-chair of the Republican National Committee.

They also had dinner with President Trump, and images Parnas posted on Twitter in May thanks the president for an ‘incredible dinner and even better conversation’ at the White House.

An image posted by the Organized Crime and Corruption Reporting Project shows them pictured with Vice President Mike Pence, Trump, and Giuliani.

The men are being represented John Dowd, who served as Donald Trump’s lawyer during part of the Mueller probe. 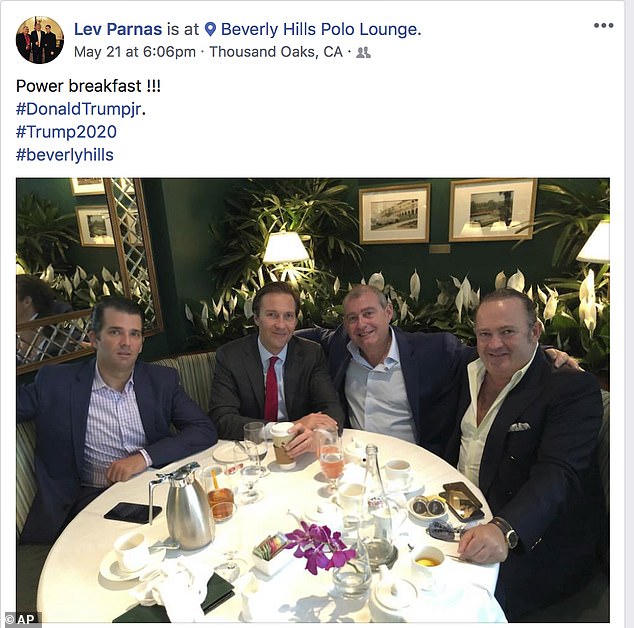 Their company, Global Energy Producers LLC, has been accused of violating campaign finance laws for its six-figure donations to the super PAC.

Those laws are in part to protect U.S. elections from ‘illegal foreign financial influence,’ according to the indictment unsealed Thursday.

The men ‘conspired to circumvent the federal laws against foreign influence by engaging in a scheme to funnel foreign money to candidates for federal and State office so that the defendants could buy potential influence with candidates, campaigns, and the candidates’ governments,’ according to the indictment.

It says they concealed the effort from the campaigns themselves, and laundered the contributions through LLCs and through the use of ‘straw contributors.’

Parnas was borne in Ukraine and Fruman was born in Belarus.

Although the indictment doesn’t mention Trump or the pro-Trump super PAC by name, it says: ‘Specifically, in or about May 2018, to obtain access to exclusive political events and gain influence with politicians, LEV PARNAS and IGOR FRUMAN, the defendants, made a $325,000 contribution. to an independent expenditure committee (Committee-1) and a $15,000 contribution to a second independent expenditure committee Despite the fact that the FEC forms for these contributions required PARNAS and FRUMAN to disclose the true donor of the funds, they falsely reported that the contributions came from GEP, a purported liquefied natural gas import export business that was incorporated by FRUMAN and PARNAS around the time the contributions were made.’

But in truth and fact, the funds came ‘from a private lending transaction between FRUMAN and third parties, and never passed through a GEP account,’ it says. They took the actions ‘deliberately’ in order to evade reporting requirements, according to the indictment.

Also indicted are David Correia, who is described as a businessman born in the U.S., and Andrey Kukushkin, a businessman and U.S. citizen who was born in Ukraine.

Giuliani said he couldn’t comment at this point when contacted by a Buzzfeed reporter.

Parnas told BuzzFeed he met with President Trump ‘many times.’ He was working in 2018 to help introduce Giuliani to Ukrainians as he explored his unproven theory that Ukraine carried out election interference by pushing out information on now-jailed Trump campaign chair Paul Manafort. Among his efforts was putting together a Skype call between Giuliani and Viktor Shokin, the former Ukrainian prosecutor whose firing Vice President Joe Biden demanded in 2016, according to the publication.

On May 9, 2018, days after his White House visit, Parnas also posted images of himself meeting Rep. Sessions, the former chair of the House Rules Committee, who was in a tough reelection fight, along with David Correia, who was also charged in the indictment.

Just two days later, Sessions wrote Secretary of Mike Pompeo, telling the nation’s top diplomat: ‘I have received notice from close companions that Ambassador Yovanovitch has spoken privately and repeatedly about her disdain for the current administration,’ the Daily Beast reported. Days later, Global Energy Producers made its donation to the America First PAC.

According to the indictment, Parnas and Frumon agreed in May and June 2018 to raise $20,000 or more for a ‘then-sitting congressman’ identified only as ‘Congressman-1’ who had been the beneficiary of $3 million in independent expenditures by the PAC.

They also sought the lawmaker’s assistance to ‘remove and recall’ the then-U.S. ambassador.

The indictment says Fruman made an individual $2,700 maximum campaign contribution, then did another in Parnas’ name. It also identifies a not-stealthy effort to ‘conceal’ contributions by putting his name as ‘Furman’ rather than the correct spelling.

The overall scheme was designed to allow the conspirators to ‘gain influence with candidates,’ the government charged.

They made contributions in their own name instead of in the name of ‘Foreign National-1.’

The took steps to hide the person’s involvement due to what Kukushkin called the person’s ‘Russian roots and current political paranoia about it.’

They also planned to use his funds to make contributions to state and federal officials in an effort to obtain a license for their recreational marijuana business.

They attended a campaign rally with ‘Candidate-1’ in Nevada on October 20, 2018, the same day Trump held a rally in Elko, Nevada.

That was a rally where Trump campaigned for Rep. Mark Amodei.

Homestate Republican Senator Dean Heller said at the event in Nevada’s gold country: ‘Mr. President, you know a little bit about gold. In fact, I think that everything you touch turns to gold.’

Off stage, Trump told traveling reporters the U.S. would be pulling out of the 1987 intermediate-range nuclear missile treaty with the former Soviet Union.

On Nov. 1, a $10,000 contribution went to the candidate in Fruman’s name, but it was actually funded by the foreign national, according to the indictment.

Three House committees on Thursday subpoenaed Parnas and Fruman, who had not complied with an earlier request for documents.

‘Your clients are private citizens who are not employees of the Executive Branch. They may not evade requests from Congress for documents and information necessary to conduct our inquiry,’ they wrote their attorney, John Dowd.

‘They are required by law to comply with the enclosed subpoenas. They are not exempted from this requirement merely because they happen to work with Mr. Giuliani, and they may not defy congressional subpoenas merely because President Trump has chosen the path of denial, defiance, and obstruction.’

Pour yourself a glass because it’s time to talk about #ChampagneGate again. #The…