By Adam Shergold for MailOnline

A Formula 3 driver was involved in a terrifying crash today as he hit a raised kerb on a race track and flipped through the air three times.

Alex Peroni, 19, was launched through the air after hitting the ‘sausage kerb’ at Monza race track in Milan.

The Australian teenager remarkably walked away unscathed after his car nose dived into the side of the track before landing upside down.

Lewis Hamilton watched the terrifying moment while giving a live interview at the Belgian Grand Prix at Spa-Francorchamps last Saturday. 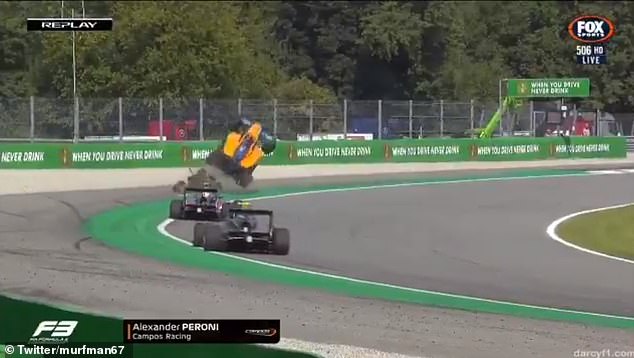 Peroni was running wide on the Parabolica corner during Saturday’s Formula 3 race and as a result, he runs into the raised ‘sausage’ kerb as he attempts to steer back onto the track 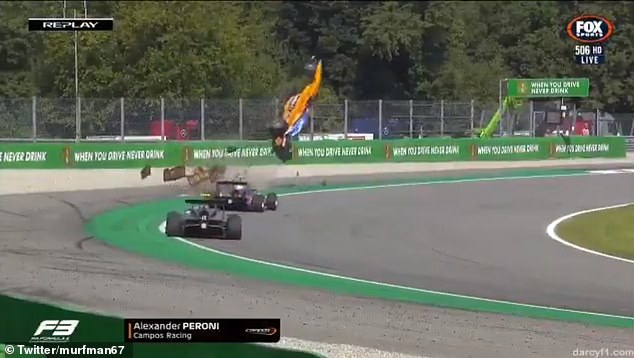 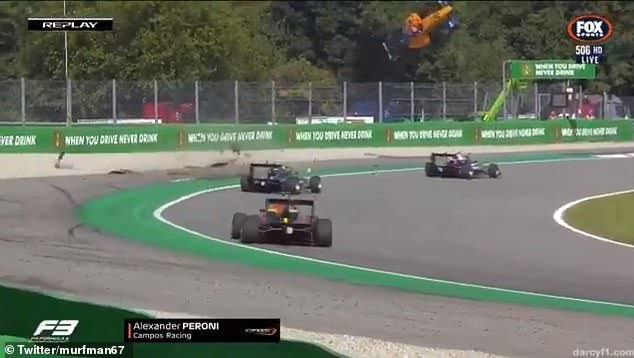 His car begins to rotate as it flies through the air, several metres above the track and flips three times

After today’s crash Peroni looked shaken but was able to walk away with the aid of marshals and medical staff. No other drivers were involved.

It led to calls for the sausage kerb, on the final corner of the Italian circuit, to be removed before Formula 1 qualify there later on Saturday.

The third and final practice session for the Formula 1 was delayed while the crash barrier was repaired and the kerb was removed. 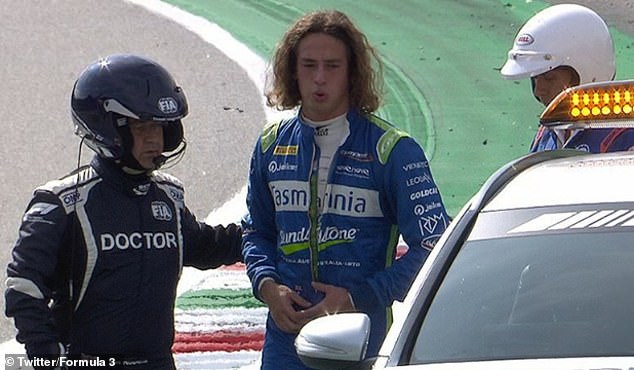 Peroni, 19, (centre) was thankfully able to walk away from the horror smash at Monza on Saturday 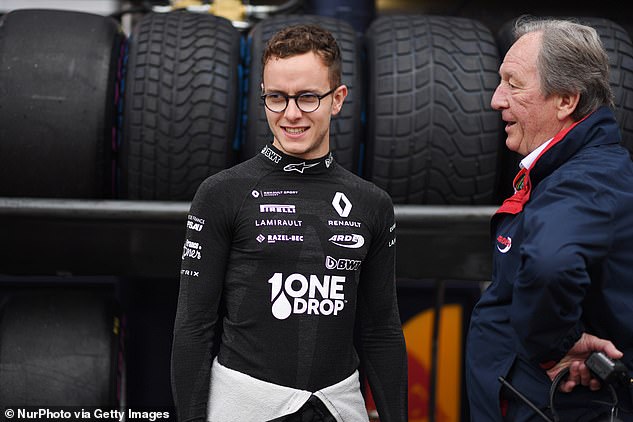 Peroni, from Hobart in Tasmania, is in his first season in the Formula 3 Championship. He was 18th in the drivers’ classification entering the Monza weekend with his best finish so far eighth in France.

Formula Three qualifying had to be halted on Friday for safety reasons after a queue of cars lined up on the back straight preparing to start their timed runs while others approached at speed.

Who the hell thought it was a good idea to plant a sausage kerb on the outside of the parabolica? Just put grass and gravel back for god sake. Good to see Peroni walk away from that, scary accident #F3

I cannot believe the @fia sanctioned putting a sausage kerb on exit of parabolica. What on earth is going on in their brains. Absolutely brainless and dangerous beyond belief. I am lost for words. #WTF please tell me this is not true https://t.co/DYq5XDpx4s

French driver Hubert, 22, hit a tyre wall on the Eau Rouge corner at Spa after losing control of his car.

As it rebounded back onto the track, American driver Juan-Manuel Correa carved through him.

Correa, 20, has been placed in an induced coma following complications from the crash and remains in a ‘critical but stable’ condition in a London hospital.

Hubert was the first driver fatality at a Formula One race weekend since Ayrton Senna and Roland Ratzenberger were killed at Imola in 1994. 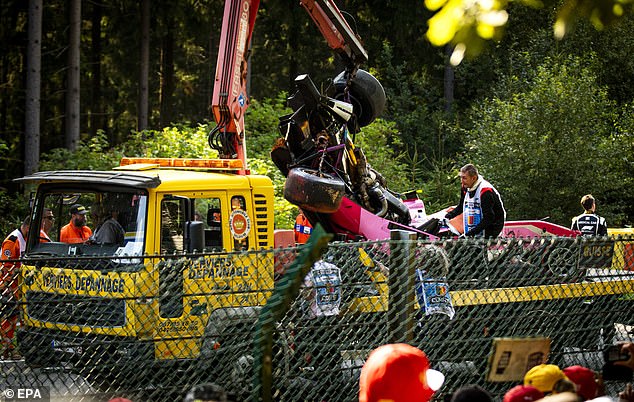 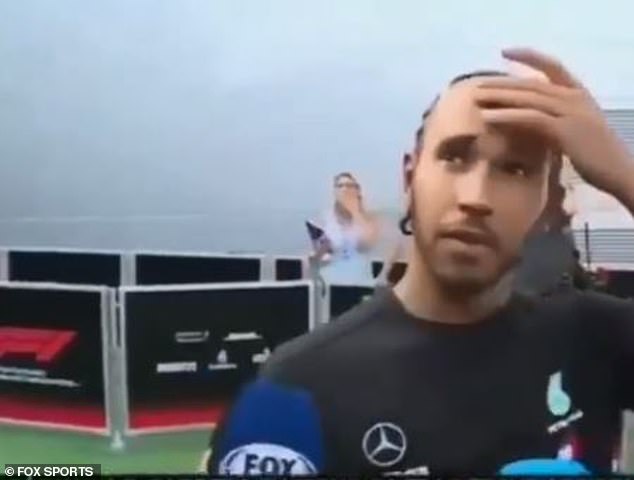 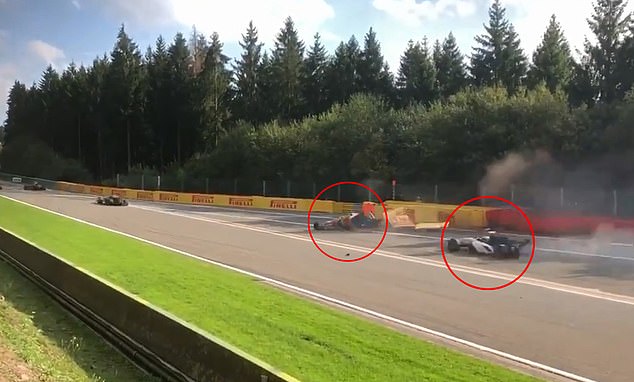 Footage from the track shows Hubert’s car (circled left) slam into the right-hand wall of the track, with the car appearing to still be intact. However, seconds afterwards American driver Juan Manuel Correa (circled right) hits Hubert, breaking the car in two 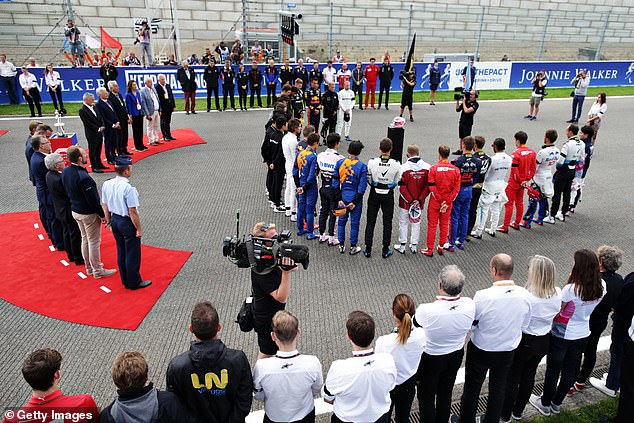 iPhone SE2 is coming, and it could be huge (but also kinda small)

RT @tictoc: The best of this weekend at the #Pyeongchang2018 #Olympics …