Former Democratic nominee Hillary Clinton has refused to rule out a 2020 bid for the White House.

While the former US secretary of state has no plans to challenge President Trump she did not completely rule out the possibility of doing so when questioned on radio in London this week.

When asked if she would consider another presidential campaign Ms Clinton told Emma Barnett on BBC Radio 5 Live: ‘As I say, never, never, never say never.’ 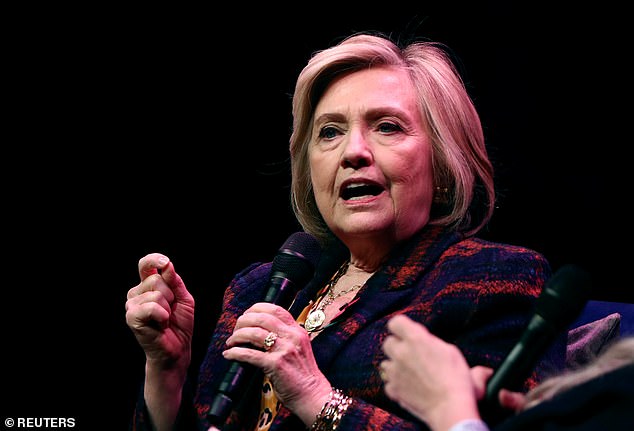 Former U.S. Secretary of State Hillary Clinton was in London for the launch of a book she wrote with daughter, Chelsea. In a BBC radio interview this week she refused to rule out a bid in 2020 for the White House

The 2016 presidential candidate said she had been questioned numerous times about getting on the campaign trail for a second time.

‘I will certainly tell you, I’m under enormous pressure from many, many, many people to think about it.’

She admitted she did often thinking of what kind of president she could have been.

‘What I would have done differently, and what I think it would have meant to our country and the world. So of course I think about it all the time,’ she said.

And while Ms Clinton refused to completely rule out another run for the White House she insisted she had no plans to do so at this stage.

‘But as of this moment, sitting here in this studio talking to you, that is absolutely not in my plans,’ she said.

She said whoever wins next time would have a ‘big task trying to fix everything that has been broken’.

Like her mother, Chelsea Clinton expressed her dislike of the current administration during the radio interview.

‘We have to retire…the current occupant of the White House and get back to having a country that is having a pluralistic, robust, respectful, kind democracy,’ she said.

‘I don’t think we have any of those things being true in our country right now.’

She said regardless of whether her mother decided to make another run for the presidential office or not, she would always have her support.

‘I’m always in her corner. Whatever she decides to do in any given day, I’m here to support and love her.’ 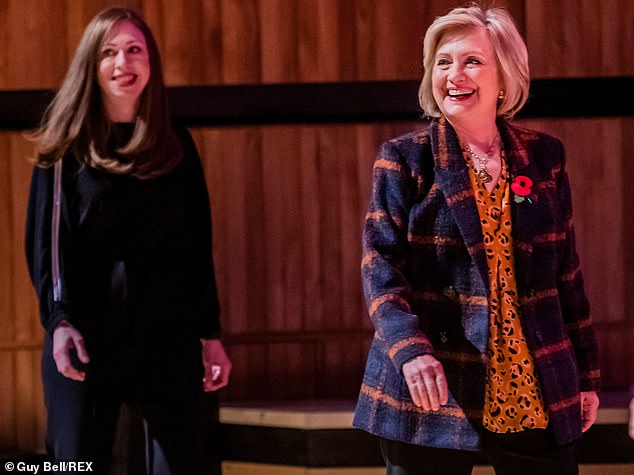 Hillary Clinton and her daughter Chelsea made an appearance at the Southbank Centre in London to promote their new book. ‘The Book of Gutsy Women’ features dozens of women the mother-daughter duo admired

Hillary Clinton’s 2016 loss to Donald Trump came as a shock after polls in the lead up to the election frequently saw her edge out in front of her opponent.

Ms Clinton ran her campaign off the back of her political experience. As the candidate with an extensive CV in politics, having been the US first lady, a senator for New York and secretary of state, she sold herself as the most qualified candidate.

It proved to be a move that backfired in a country where the public appeared to have lost faith in politicians and chose to put the nation’s political affairs in the hands of a business man over a career politician.

Ms Clinton’s eventual defeat was considered by many as a sign of the American public revolting against the political establishment.

If she did decide to once again put her hat into the ring of potential candidates Ms Clinton would join an already crowded Democratic field, where former vice president Joe Biden and Elizabeth Warren stand out as the front-runners in the majority of early polls.

Ms Clinton gave the interview while in London, with her daughter Chelsea Clinton. The mother-daughter duo appeared at the Southbank Centre in the city on Sunday promoting their new book: The Book of Gutsy Women.

In the same interview she also gave her opinion on the public treatment towards the Duchess of Sussex, her decision to remain with her husband after his affair with a White House intern and the unpublished report on potential Russian interference in the 2016 EU referendum.

Ms Clinton said she wanted to put her arms around Meghan Markle and comfort her over the racist and sexist treatment she has received. 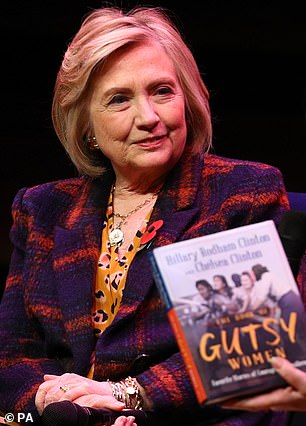 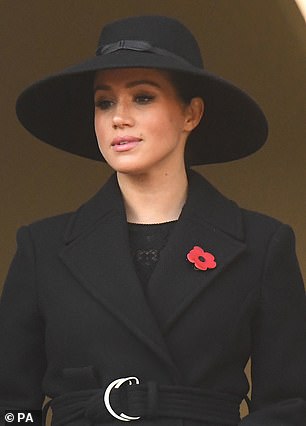 In the same BBC radio interview Ms Clinton also gave her opinion on the public treatment of the Duchess of Sussex. She suggested race was clearly an element in the backlash against Meghan over the past few months

‘I feel as a mother I just want to put my arms around her. Oh my God, I want to hug her!

‘I want to tell her to hang in there, don’t let those bad guys get you down. Keep going, do what you think is right.

Meghan has faced widespread scrutiny and public attention in recent months, with husband Harry suggesting there was a tabloid campaign against his wife.

The former US secretary of state said that the treatment of Meghan over the past three years has been ‘heartbreaking and wrong’ and said race was clearly an element in it.

‘She has made her own way in the world. And then she falls in love, and he falls in love with her, and everybody should be celebrating that because it is a true love story. You can just look at them and see that.’

“AOC is getting her own action figure” …

Fire breaks out after vandals cause a pipeline explosion in Nigeria. …

The Gentlemen Exclusive Movie Clip – One Rule in the Jungle (2020) | Movieclips...