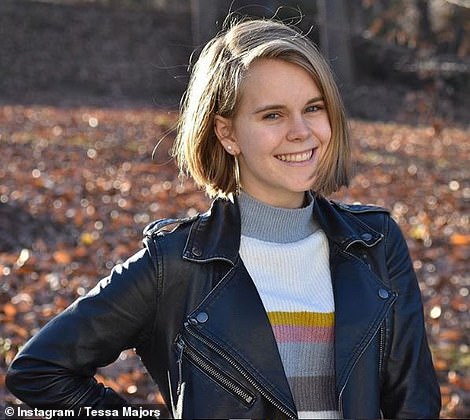 Hundreds of grievers and members of the Barnard College community gathered at Morningside Park on Sunday night to mourn the death of slain student Tessa Majors.

The stone staircase leading into the park was set aglow by vigil candles and cellphones lights shinning in the 18-year-old’s memory after she was stabbed to death by a group of young men in a mugging on Wednesday.

Mourners in the crowd desperately held onto each other, fought back tears and provided comfort as they remembered Majors.

‘Tessa must have been extraordinary. Feminist, iconoclast, musician, friend… I want to know more about Tess,’  Lisa Carnoy, co-chair of the Columbia University Board of Trustees, said to the crowd.

‘Together we will, we must, find an enduring way to remember and honor her,’ she continued, according to WLNY.

Majors, a freshman at Barnard College, is lauded by loved ones as a talented musician, singer and an aspiring journalist.  It was revealed Sunday that Majors was allegedly visiting the park to purchase marijuana from an unknown source. 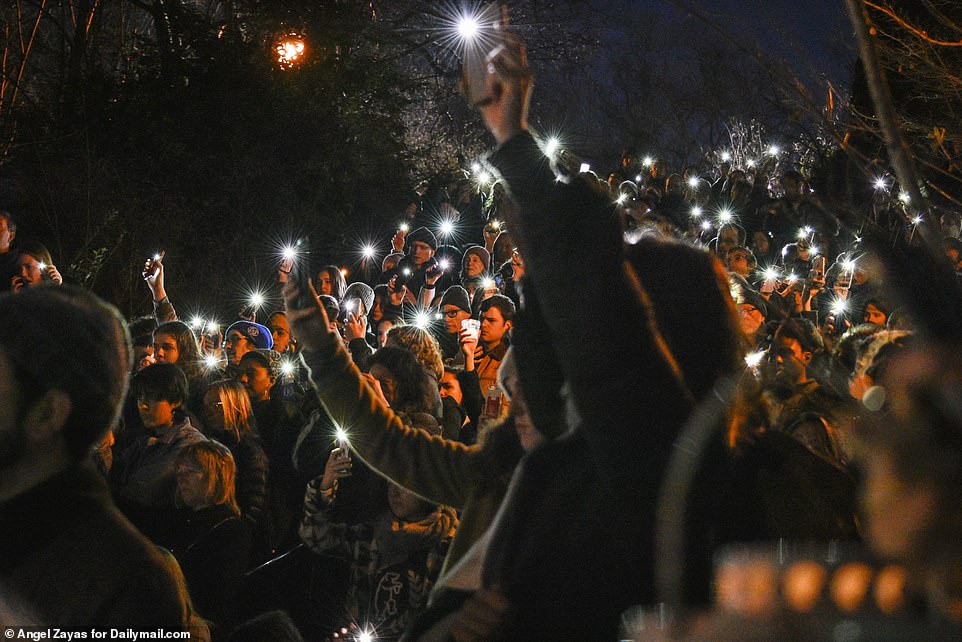 Hundreds of mourners and members of the Barnard College community attended the candlelight vigil held on Sunday evening, atop the stairs where Majors desperately fought for her life and tried to find help 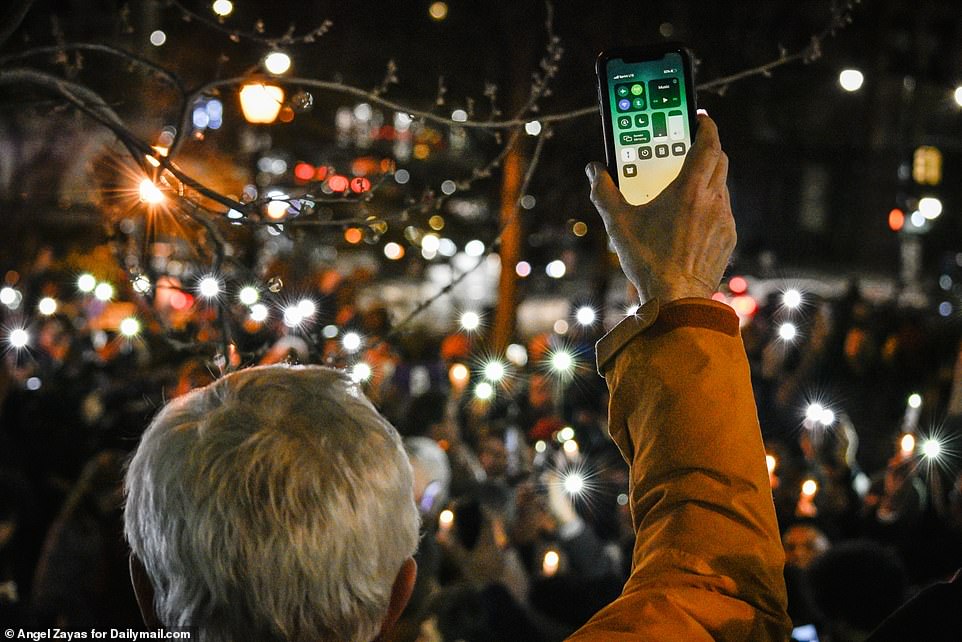 Mourners raised candles, or used their cell phones lights, to honor the 18-year-old girl who attended Barnard College as a freshman 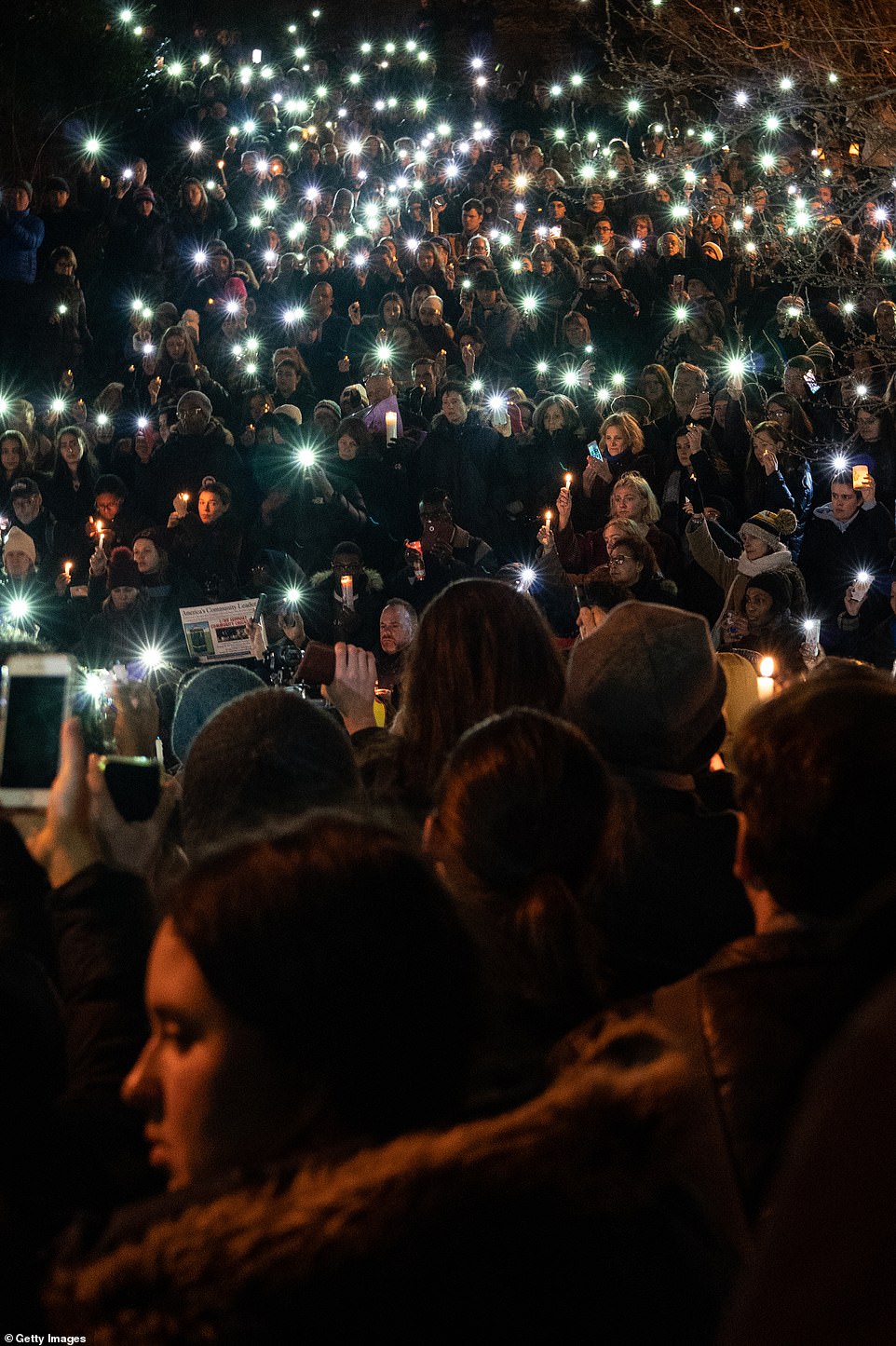 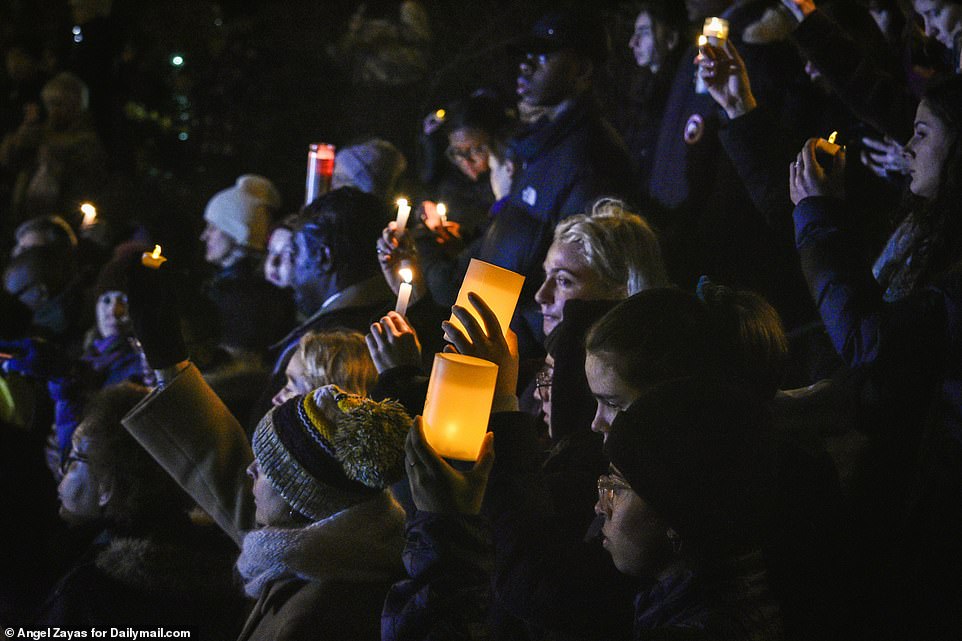 Carnoy: ‘Tessa must have been extraordinary. Feminist, iconoclast, musician, friend … I want to know more about Tess. Together we will, we must, find an enduring way to remember and honor her’ 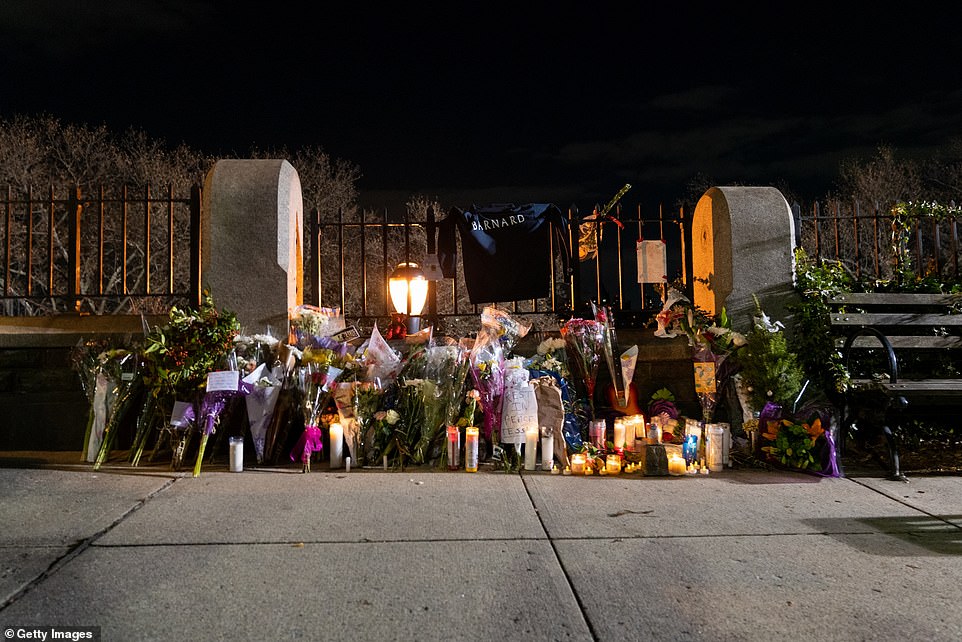 Pictured: a makeshift memorial, complete with bouquets of flowers, lit candles and tributes to Majors,  was erected at Morninside Park on December 15

Onlookers reportedly said the most heart-wrenching part of this tragedy is that no one will know the heights Majors would have reached and what she could have become.

‘The fact that she’s not going to have any of those experiences, that’s what I’m thinking about. That’s what I’m feeling,’ said Darcy Cassidy, a Barnard College graduate.

So far, the New York Police Department has arrested a 13-year-old in relation to the attack and increased patrols in the area, but some say that’s not enough.

The vigil was organized by New York City officials and local leaders attended the event to not only pay tribute to Majors, but provide solutions.

Assemblywoman Inez Dickens called on the city’s authorities to enforce a more proactive presence in the sprawling, 30-acre park. 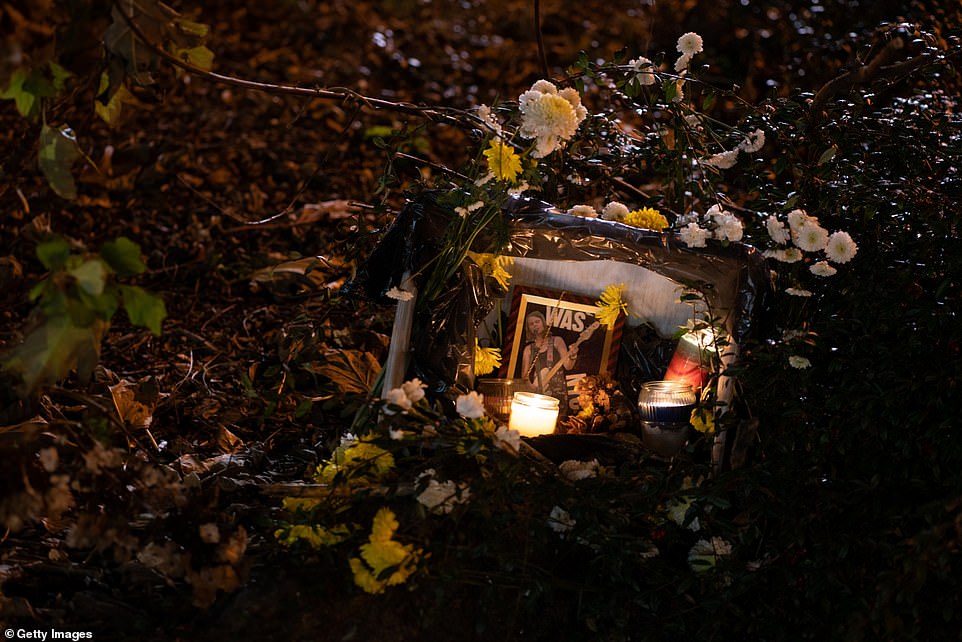 Pictured: A memorial decorated in flowers, candles and a photo of Majors was placed outside in Morningside Park ahead of the candlelight service 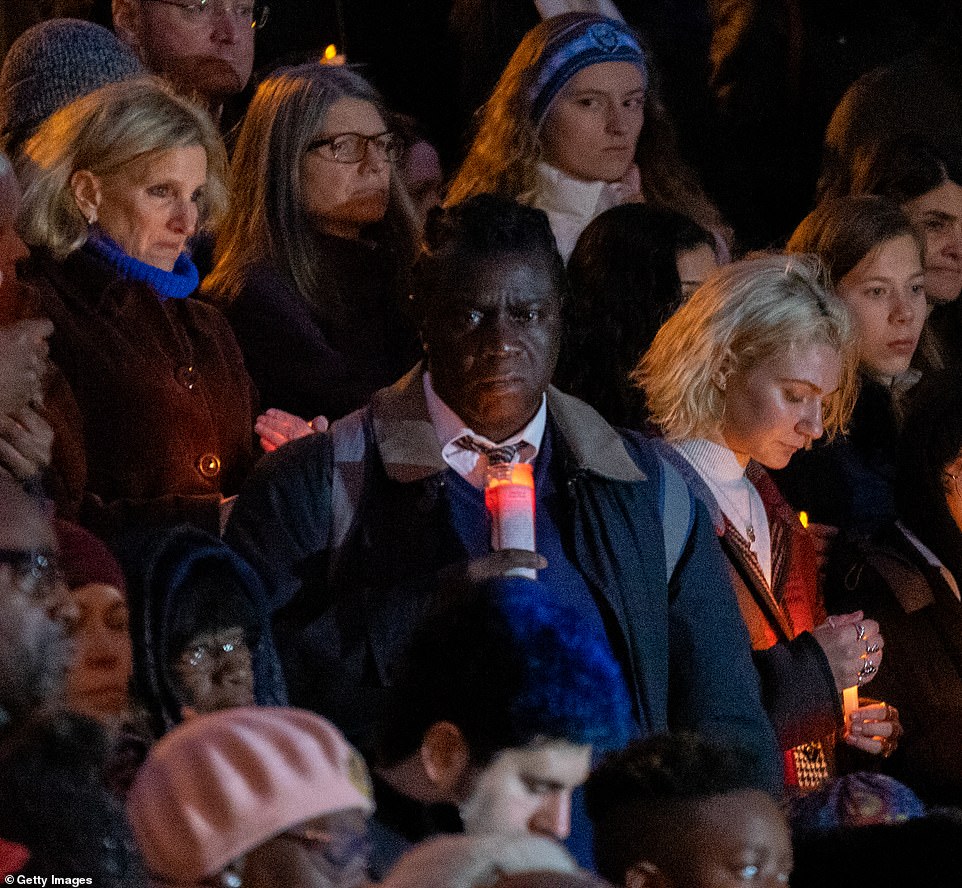 Some officials not only blame the city for failing Majors, but for also failing local youth who don’t have the resources to stay off the streets.

City Councilman Mark Levine said: ‘We must do more to insure that every child in this neighborhood grows up with a loving community and the support that they need to be healthy adults.’

One mourner agreed, saying: ‘I hope as tragic as it is this will be a galvanizing event for the neighborhood.’

While some rallied behind local leaders calls for action, others said politics should not have been included at a a service honoring Majors’ life. 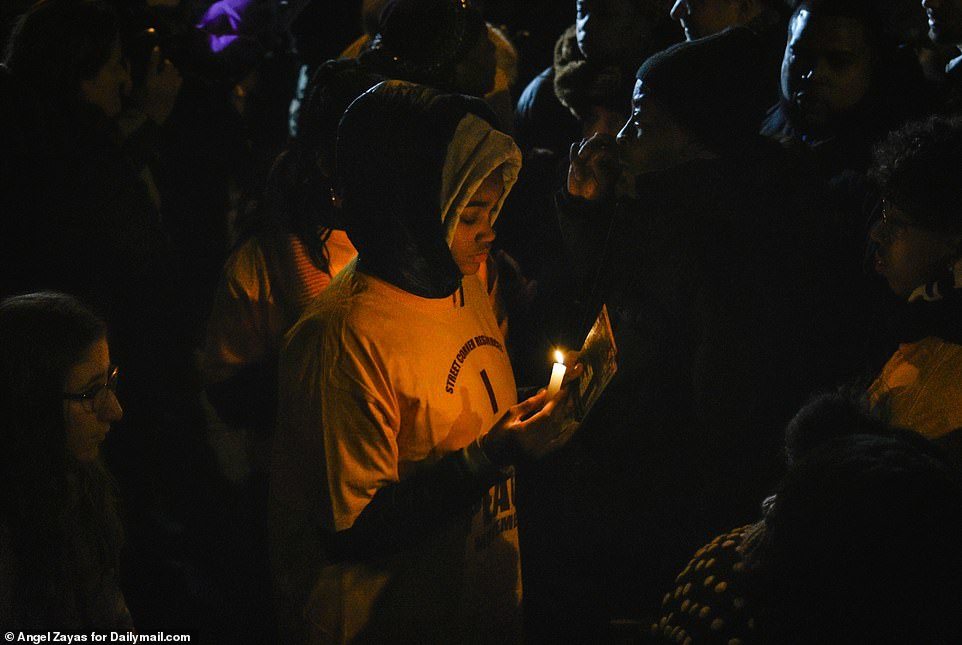 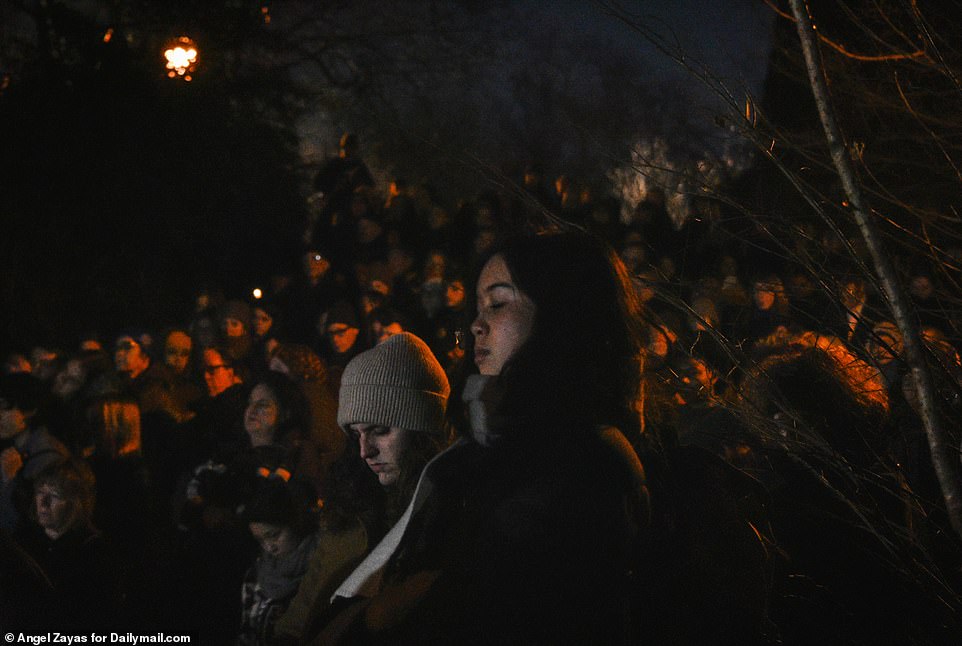 Mourners in the crowd desperately held onto each other, fought back tears and provided comfort as they remembered the illuminating force that Majors left in her wake

Cassidy said: ‘I would also like for there to be room for just grieving. I think there should be space for both, for thinking about how we’ve created as a city circumstances where kids, or young children, are so desperate that they resort to violence. But also a space for just being sad and grieving this personal thing that happened to this individual.’

Majors, from Charlottesville, Virginia, arrived in Manhattan to attend Barnard College and played in a rock band with friends.

She previously graduated from St. Anne’s-Belfield School in May, where Head of School David Lourie called Majors, ‘a shining light in our community, a good friend, respected classmate, trusted teammate, and creative and passionate musician.’

Majors reportedly told an editor from a newspaper internship in highs school that she planned on taking journalism classes while at Barnard, according to ABC 7.

The devastating incident happened on December 11 when Majors was walking into Morningside Park near Columbia University at 5.30pm

New reports reveal that Majors was allegedly visiting the park to purchase marijuana from an unknown source.

‘What I am understanding is that [Majors] was in the park to buy marijuana,’ Sergeants Benevolent Association president Ed Mullins said during an interview on AM 970 show, the New York Post reports.

While walking down the steep stairs into the park, the 18-year-old was approached by three young men intent on mugging her.

According to confessions from the 13-year-old suspect, he and two friends decided to rob someone after classes let out that afternoon.

The trio decided to look for victims in Morningside Park, and initially followed an unidentified man they planned to attack.

‘They followed a man with the intention of robbing him and decided not to,’ Detective Vincent Signorett said, according to the New York Times.

Later, they decided to victimize Majors when they spotted her later that day.

The suspect told police that his two friends grabbed Majors, put her in a chokehold and removed items from her pockets.

One of the boys allegedly dropped a knife as he restrained Majors from running, picked it up and handed it to a friend, who then stabbed Major.

The suspect says they retrieved her wallet and then fled the scene, leaving the college student behind on the steps.

Majors desperately crawled back up the long Morningside Park stairs in search of help, but collapsed before she could reach someone for assistance.

The security guard found Majors and called emergency crews to the scene, but she succumbed to her injuries in a nearby hospital. 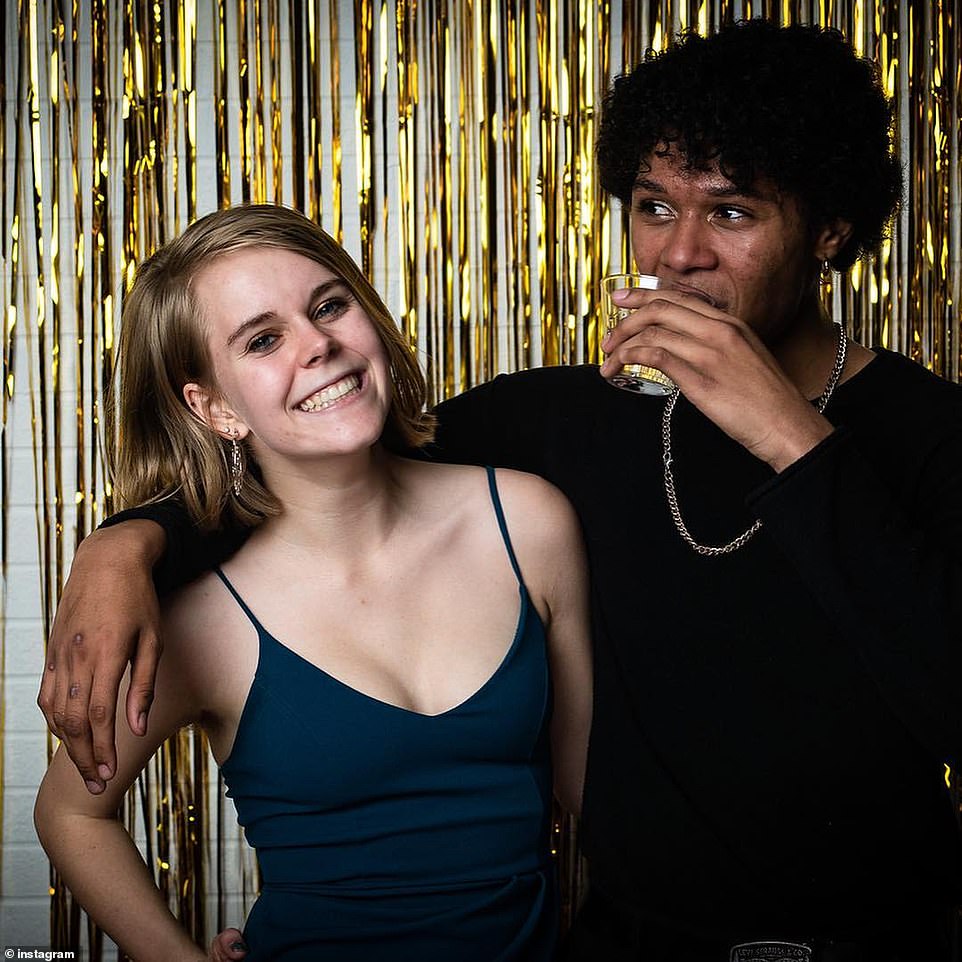 We lost a very special, very talented, and very well-loved young woman. Tess shone bright in this world and our hearts will never be the same,’ her family said in a statement

At the scene, authorities recovered Majors’ uncharged cell phone lying next to her and a butterfly knife.

The 13-year-old suspect was arrested the next day and taken into police custody where he remains without bail.

He will be tried as a juvenile in family court following his arrest and is due back in the courtroom on Tuesday.

Tributes for Majors have erected at Barnard College and Morningside Park, and loved ones have shared memories about Majors.

‘We lost a very special, very talented, and very well-loved young woman. Tess shone bright in this world and our hearts will never be the same,’ her family said in a statement. 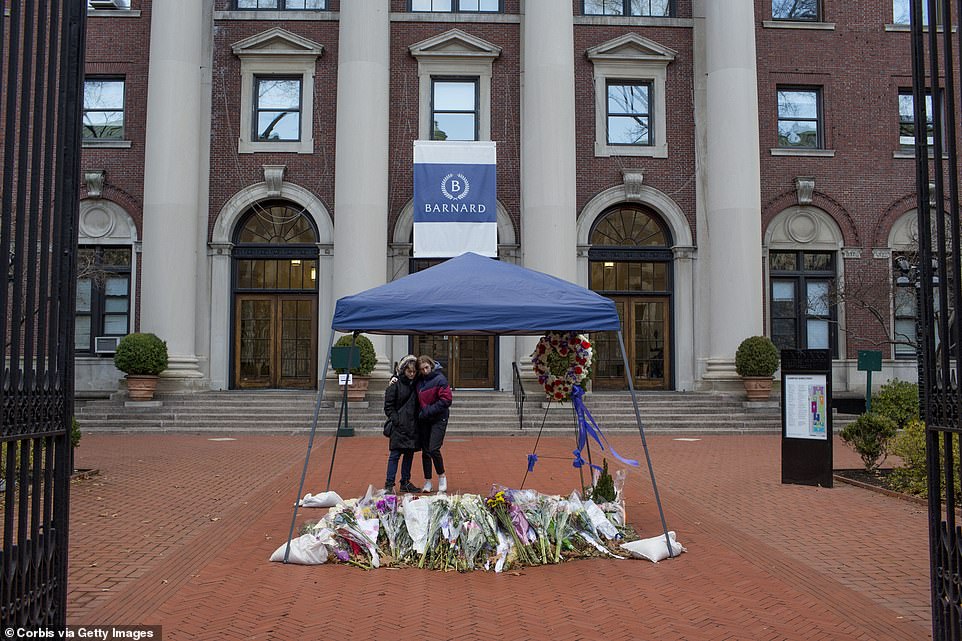 Two Barnard College students huddle together, holding each other for comfort, as they look at the pile of flower bouquets, wreaths and tributes left for Majors in front of the school’s entrance on December 15 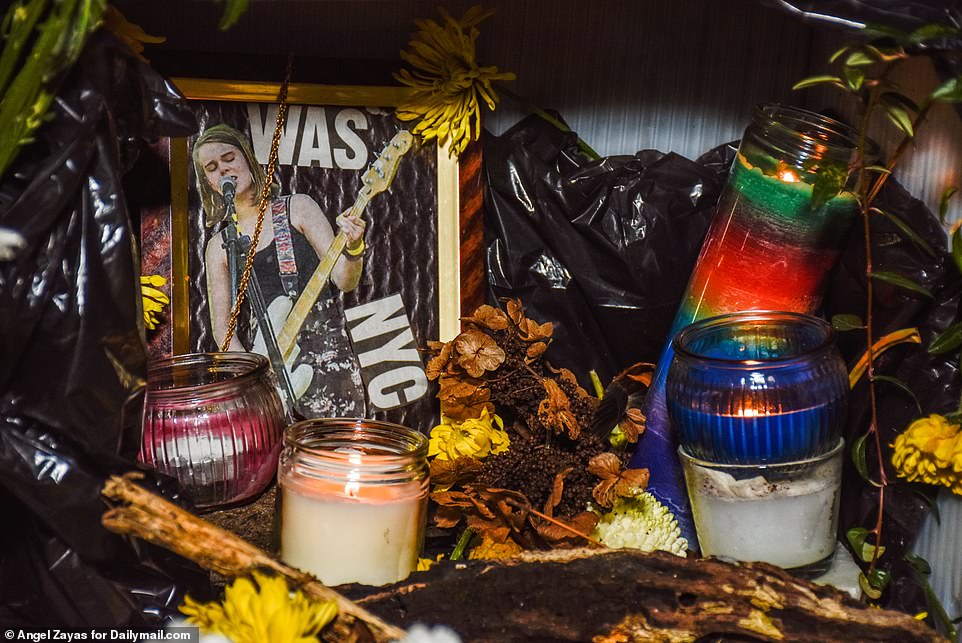 Beilock: ‘Tessa was just beginning her journey at Barnard and in life. We mourn this devastating murder of an extraordinary young woman and member of our community. This is an unthinkable tragedy that has shaken us to our core. Please know that we are all grieving together and I am thinking of you as we process this awful news as a community’

Jeyon Falsini, assistant manager at the venue The Southern Cafe and Music Hall in Charlottesville where Majors had performed previously, remembered her for her musical talent.

Falsini told the New York Post: ‘This whole town knew her. It’s a small community. She had bleached blonde hair. She had a great look — a rocker, wore fishnet stockings, plaid skirt, chunky shoes. She looked like a punk rocker.’

‘She was amazing, a great performer. For someone so young, she had a commanding presence,’ Falsini continued.

‘I’ve said it before but you could tell she was going to go places. And if you stuck with her, it was going to be a part of the story.’

‘She was just one of those outstanding people, musician, did very well in school,’ he told New York Daily News.

Barnard’s president Sian Leah Beilock addressed the incident in a letter to students on Wednesday.

‘Tessa was just beginning her journey at Barnard and in life. We mourn this devastating murder of an extraordinary young woman and member of our community,’ she said.

‘This is an unthinkable tragedy that has shaken us to our core. Please know that we are all grieving together and I am thinking of you as we process this awful news as a community.’

The House has passed a $4.6-billion emergency funding bill for the humanitarian …