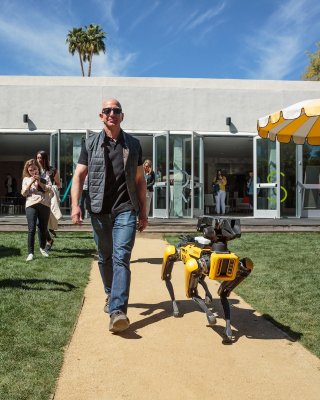 Last year the ‘bot loving billionaire wowed the internet with a fairly menacing shot taken inside 1.5 ton giant mech suit, breaking the apocalyptic ice a bit by comparing himself to Ellen Ripley. This year’s first shot from the event is a bit more subdued, with Bezos taking “my new dog,” the latest iteration of Boston Dynamics’ electric quadruped SpotMini out for a stroll.

Of course, the robot appears to have just been on loan — Bezos and company have been steadily building up Amazon Robotics with logistical automation acquisitions, but Boston Dynamics only changed hands from Google to SoftBank early last year.

And besides, there appear to have been plenty of other robots competing for the billionaire’s time at the invite-only. Here’s Bezos challenging a robotic arm to a bottle flipping game, and here’s a pair of Piaggio Gita delivery robots playing follow the leader with SpotMini and Bezos, while a drone flies overhead.

Because if you were the billionaire owner of Amazon, you’d probably spend your Monday palling around with robot friends, too.

TikTok faces ban in the US; pulls out of Hong Kong – TechCrunch