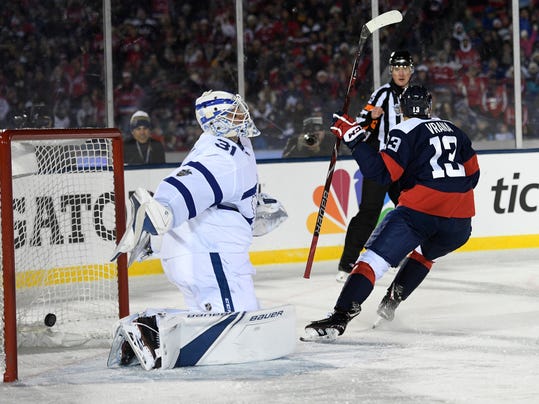 ANNAPOLIS, Md. (AP) — Less than a minute after each of his team’s goals, Toronto Maple Leafs goalie Frederik Andersen gave up a score to the Washington Capitals. Didn’t take long for him to get pulled from the Stadium Series outdoor game at the U.S. Naval Academy, either.

Andersen turned in his latest shaky performance as the playoffs approach, allowing five goals on 25 shots in a little more than 1 1/2 periods Saturday night, and the Leafs lost to Alex Ovechkin’s Capitals 5-2.

Toronto coach Mike Babcock seemed to finally lose patience with the Danish goalie that Toronto has been figuring it could count on to carry the team when the games matter the most. Andersen was given the hook because of poor play for the only time in 55 starts this season; he was taken out of a game on Feb. 5 after being hit on the head by another player’s skate.

Why make the change?

“Well, just, I mean, it was going in. And I didn’t want to leave him in there and (have) a bunch more go in,” Babcock said. “He’s our guy. He’s our starter. We’ve got to look after him the best we can.”

Rather than assign blame to Andersen, Babcock spoke more generally about mistakes his others players made against an opponent that eliminated the Maple Leafs in the first round of the playoffs last season.

“They look at us,” he said about the Capitals, “and they still think we’re kids. And it looked like we were kids here tonight. I thought they smacked us around.”

This was the fourth game in a row — and eighth in his past nine appearances — that Andersen allowed at least three goals. And after streaking into strong position in the Eastern Conference by winning 13 of 15 games, Toronto has now lost three in a row on a road trip that will conclude on Monday at the Buffalo Sabres.

Andersen was replaced by backup Curtis McElhinney 11 minutes, 10 seconds into the second period. That was 21 seconds after Washington winger Jakub Vrana’s breakaway goal — his first score in about 2½ months — made it 5-2.

Other goals against Andersen were scored by Ovechkin — for his 40th this season and the 598th of his career — Nicklas Backstrom, Evgeny Kuznetsov and John Carlson.

Ovechkin’s made it 2-1 in the second period, and arrived only 59 seconds after Zach Hyman put the puck past Capitals goalie Braden Holtby to temporarily tie things. Carlson’s goal came just 43 seconds after Nazem Kadri spun around and zipped a shot in to get Toronto within 3-2.

Andersen didn’t offer much by way of explanation for the way this game went, although he did mention that the outdoor conditions might have made finding the puck more of a challenge than usual. He was sitting on the bench with a white wool cap on by the time the artificial lights went out in the third period, causing about a 15-minute delay.

“There were certain spots where the lights — the reflection off the ice — was a little different,” he said. “But it’s something both goalies have to potentially face.”

Copyright 2018 The Associated Press. All rights reserved. This material may not be published, broadcast, rewritten or redistributed.

‘No point’ for central banks to issue digital currency

Save 85% On The Complete Arduino Starter Kit & Course Bundle