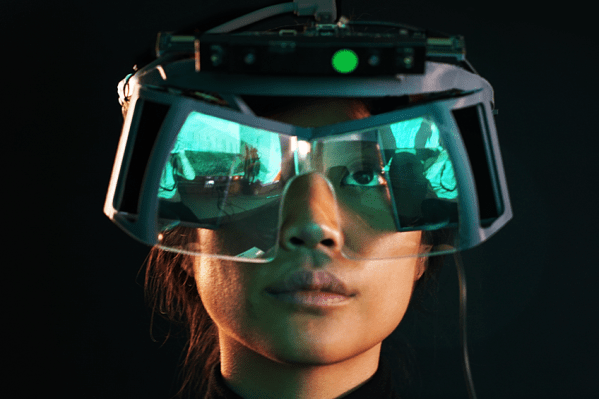 Leap Motion has been in kind of a weird place for quite a while now. They’ve raised north of $100 million for their tightly-focused computer vision work hell-bent on replicating real-time hand movements, like, really well. Their work has all been very convincing in demos, but after eight years, the company itself still feels like a bit of a demo.

Today, the SF startup is seemingly expanding its ambitions in the AR/VR space with the announcement of a new augmented reality headset which it likely won’t productize. Project North Star is just a prototype reference design, but the company is open-sourcing its schematics and, despite the fact that it makes the wearer look like a giant bug, it seems fairly interesting.

The startup says that the low-cost headset can be built for under $100 at scale. The savings here versus other AR headset systems relies on the simplicity of the optical system which promises a high quality experience in a form factor that’s hardly low-key but is on-par with the bulk we’re used to seeing in most of today’s ugly VR headsets. The dual 1600×1440 LCD displays run at 120 hertz and bring a combined 100 degree field-of-view image into the user’s periphery. The headset also integrates the necessary hand-tracking sensors of course.

The scenario basically seems like Leap Motion needed a wide field-of-view headset that integrated the necessary sensors to demo their hand-tracking tech and realized that there wasn’t anything out their that fit the bill entirely, so they built their own.

“We hope that these designs will inspire a new generation of experimental AR systems that will shift the conversation from what an AR system should look like, to what an AR experience should feel like,” Leap Motion CTO David Holz wrote in a blog post.

The company has released a host of very intriguing videos over the past several weeks that highlight the company’s work on adapting its hand-tracking tech for augmented reality. What they’ve shown off is deeply convincing.

Leap Motion has always been a startup that I’ve liked quite a bit because they focused on something with a tight unwavering gaze and they are clearly far-and-away the best at what they do as a result. Nevertheless, the company is an SDK built for hardware that isn’t far out of the dev kit phase itself. That couldn’t be more evident than with this AR thing it’s building, which looks better than a lot of hardware out there now and — as a result — showcases that the AR headset market has years before it reaches any semblance of maturity.

RT @TwitterMoments: The first night of the Democratic debate is in the books. Ca…