If you thought you knew the history of Venom’s symbiote, then think again. Writer Donny Cates and artist Ryan Stegman just introduced a new twist to the symbiote mythology in Venom #1, a brand new series that is part of Marvel Comics’ “Fresh Start” relaunch.

It turns out that there were symbiotes on Earth long before Spider-Man returned from Secret Wars wearing a black-and-white suit that turned out to be a symbiotic alien creature. Venom #1 starts with a flashback to ancient times showing a symbiote attacking and killing a group of soldiers. The symbiotes were being controlled by a red-skinned being with a fanged mouth who spoke in a strange, unintelligible tongue. 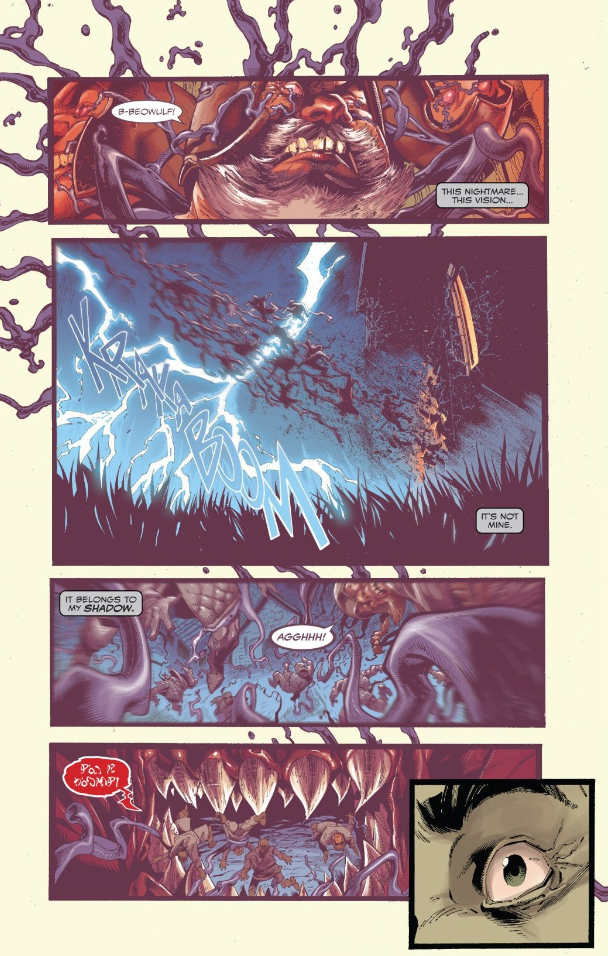 Given that the symbiotes are an alien species called the Klyntar that hail from a planet of the same name, it stands to reason that they could have traveled to Earth long ago. The big question, of course, is who is this red monster and how can it control them? One key piece of information comes from a dying soldier who cries out for Beowulf, which not only tells us this took place around 700 AD, but that the red creature could be Marvel’s version of the legendary Beowulf enemy named Grendel. Or perhaps it’s Grendel’s mother and the symbiote is Grendel.

In present day, Eddie Brock as Venom is seen trying to intervene in a police sting gone wrong when his symbiote refuses to listen to him. Red veins suddenly appear on the symbiote and it starts to speak the same strange language from before.

Just as he starts to rage out of control, Venom gets taken out and dragged to an empty warehouse by a mysterious new character named Rex Strickland who later explains that he used to be part of a covert team of soldiers who used other symbiotes as weapons a la Agent Venom. Eventually the whole squad went insane and were put on ice by SHIELD, but now they are active again, so Rex wants Eddie’s help in taking them down.

When Eddie catches up to the four thawed-out symbiote soldiers, they’re all sporting the same red design that signals they are under control of the strange language. One of them starts to speak the language to Venom, causing Eddie’s symbiote to abandon him and flee, leaving Eddie completely defenseless. Elsewhere, we see the a concrete street begin to crack, and from underneath the red creature emerges, taking to the skies with a giant pair of wings, and Eddie’s symbiote tells us that “God is coming.” Exactly what the red creature is remains a mystery, but it clearly has the power to control symbiotes, and the symbiotes revere it as a deity.

What do you think of this big twist on Venom’s mythology? What’s your take on the red creature? Let us know in the comments.

Check out our thoughts on the big changes by watching the video above.

Also be sure to read our review of Venom #1.

Joshua is IGN’s Comics Editor. If Pokemon, Green Lantern, or Game of Thrones are frequently used words in your vocabulary, you’ll want to follow him on Twitter @JoshuaYehl and IGN.

Best Gaming Motherboard 2020: The Foundation of Your Gaming PC

Crisis on Infinite Earths Resurrects the Lazarus Pit to Save [SPOILER]

Singer Joss Stone says she was detained and deported from Iran. …

RT @ESL: Last week we brought esports to Katowice for the sixth year in...