Real-world money will only be usable to unlock cosmetic items.

Microtransactions are returning to Star Wars Battlefront II alongside the Endor Update on April 18.

The revamped microtransaction system brings back Crystals as the sole item that can be purchased with real-world money. Crystals will strictly be used to unlock cosmetic skins, such as Endor Leia and Endor Han, which are two of the 50 new personalization items being introduced in this latest update. For those who don’t want to spend money, these items can also be purchased with in-game credits. 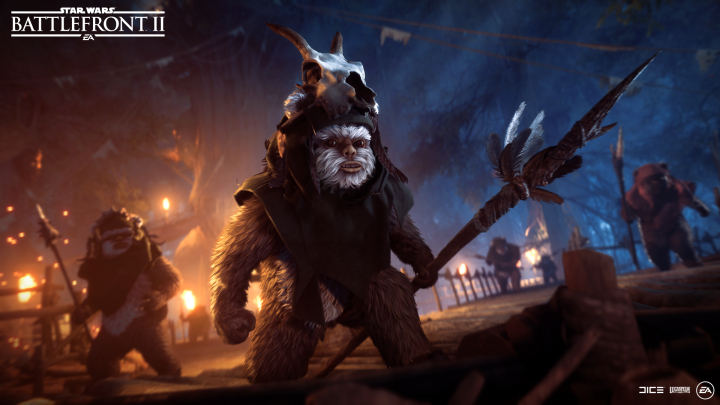 The update also brings with it a new multiplayer mode called Ewok Hunt, which pits Ewoks against Stormtroopers. Ewoks, armed with Wisties and spears, must wipe out all Stormtroopers to win the match, while Stormtroopers win by holding off the Ewoks for an undefined amount of time until an extraction team arrives. However, fallen Stormtroopers respawn as Ewoks, creating an ever-growing army of furry, little creatures.

Microtransactions were pulled from Battlefront II hours ahead of its launch in North America, reportedly due to Disney CEO Bob Iger’s concern over the intense backlash the original system received from fans. The reimplementation of the system doesn’t come as a surprise, as EA previously said Crystals would return in the first half of 2018.

The effects of the controversy are expected to extend to other EA games, as the unannounced Battlefield V will possibly only feature microtransactions for cosmetic items. “No one’s gonna do any pay-to-win stuff anymore,” a source told Kotaku about that game. “We didn’t take any of the loot box controversy lightly.”

For more, check out IGN’s Star Wars Battlefront II review, which called it a “Star Wars experience that’s stunning to look at and wonderfully faithful to the source material, but it stumbles hard on the delivery.”

Boardrooms need more Millennials. Here’s how to you can get started