Better than ever, but not that much better.

[Editor’s Note: Sony hasn’t turned on the servers for MLB The Show 18 yet, so everything our reviewer has been able to tinker with thus far has been in offline mode. We’ll update this review early next week after we’ve had time to test out online play.]

This winter, Shohei Ohtani brought the excitement and allure of a two-way player to Major League Baseball’s offseason. Meanwhile, while he courted most of the teams, the once-dominant Jake Arietta languished in the free-agent pool until accepting Philadelphia’s best offer.

In many ways, MLB The Show 18 has more in common with the oft-dependable Arietta than the shiny-new Otani, whose Babe Ruth-style two-way play on the mound and at the plate had every team lining up to sign him. This year, there’s a familiarity to the gameplay that doesn’t quite excite as much as it used to. The Show 18’s list of improvements lacks the punch some have come to expect from a top-tier game. But like the Phillies, buyers of MLB The Show 18 should know that they are getting a reliable and high-quality product, just maybe not the most alluring we’ve seen in the past few years.

The Show’s gameplay as good as it’s ever been.

That The Show’s gameplay as good as it’s ever been is an important declaration to make up front. I’ve been playing this series since its early days on the PS2, and this year’s gameplay is simply the best I’ve experienced (though not by much). Hitting feels a bit more natural and slightly less frustrating, without feeling too easy. A redesigned feedback system, seemingly borrowed from the legendary MVP 2005, quickly and easily allows you to evaluate swing timing and contact.

Once put into play, the ball travels more naturally than previous years, even more so than in the very good MLB The Show 2017, thanks in large part to increased hit variety and more realistic physics. I’m seeing a lot more fading line drives and balls that hug the fouls lines. Weak hits around the plate also reveal more variety.

Fielding also seems tighter, with players acting more like their real-life counterparts. Rangy shortstops will make the plays that journeyman infielders won’t. This shows up in instances like my Phillies franchise, where Rhys Hoskins, a first baseman playing the outfield, has a much harder time closing in on ground balls than his natural-outfield teammates.

In MLB The Show 2018, catchers react quicker to balls in the dirt than in the past; if you are used to exploiting slow catchers, be ready to get thrown out more often. I’ve also seen more fluid tags all around the field, though there are still some occasional robotic animations.

Beyond gameplay improvements, there are plenty of nice visual tweaks. The most noticeable for me was the way that uniforms are now made of various textures. Uniform numbers even shine a little bit, just like in real life. There are some great new camera angles and effects visible during replays and between innings, too. Like the uniform textures, these make The Show look more like a TV broadcast than ever before. This is also thanks to the MLB Network presentation package that returns relatively unchanged.

The commentary never quite captures the fluid cadence of a real broadcast.

For some reason, MLB The Show 18 has replaced one of its commentators this year. Harold Reynolds is gone; Mark DeRosa debuts in his place. For me, this is a lateral move – I don’t strongly prefer one over the other. But while the commentary is usually on-point, it feels slightly more disjointed than in the past. There are definitely moments of overlapping dialogue, but the commentary never quite captures the fluid cadence of a real broadcast. I’ve already heard some repeated and inaccurate lines in just a few days of play – I was once praised for taking a pitch that I definitely swung at. That said, I do appreciate that MLB The Show 18 includes more scenario-specific references to past performance and stats.

However, outside of these important but minute gameplay changes, I found the overall package to be a little disappointing. There are very few major changes to MLB The Show 18’s main offline modes, Franchise and Road to the Show. (Reminder: I’ve yet to try out the online modes due to Sony not turning the servers on until release.)

Franchise mode is nearly static, with the most noticeable update being a redesign of the menu system. Seasons are broken into “phases,” which help streamline the tasks associated with running an MLB organization. I can’t really complain about these menus, as they are much easier to navigate than in previous years. But I am disappointed that this mode – once my favorite – hasn’t seen any significant upgrades in the past few years. You can only play the same thing so many times before it gets old.

Sony also touts an improved AI in Franchise, which more capably handles lineup and rotations. I did witness benchings and promotions based on performance – an obvious move it’s never made before. Of course, left alone, the AI did make some very questionable roster moves while simming my franchise, some of which led to the dismantling of the young core of the Phillies team, including Hoskins, in favor of dismantled some pricey veterans.

Crowd size is noticeably different depending on real-life factors, such as day of the week and win/loss record. And there are some nice weather effects that are tied to game locations and dates.

Road to the Show, meanwhile, shakes things up a little more.

But these improvements pale in comparison to newer features that have become standard in sports franchise modes. In MLB The Show 18, you can’t create a new team or relocate existing ones. Players develop “off screen,” thanks to a relatively boring training system. Contract and trade negotiations are simple menus with little in the way of interaction or feedback. Fans of online multiplayer franchise will be disappointed to learn that it’s no longer an option. So while the on-field gameplay is stellar, Franchise mode is starting to feel like a relic, as nearly all other major sports games have surpassed it in terms of options, features, and innovation.

Road to the Show, meanwhile, shakes things up a little more. While the presentation and structure of this mode remain the same, no longer is the main character a rising superstar. Rather, the story shifts to a mid- to late-round draft pick hoping to crack a major league lineup. And, instead of building your player total from scratch, you will mold him based on a preselected archetype.

These changes lead to a more organic and streamlined career mode.

However, the biggest change is how these players evolve over time. Instead of earning XP and spending it to increase various ratings, these ratings improve automatically based on performance. Take a ball and plate discipline increases; strike out and your contact rating will drop. These changes lead to a more organic and streamlined career mode, albeit one with a little less flexibility. You are always bound to the prototypical player you selected at the outset, including its built-in strengths and weaknesses. Additionally, there are numerous training opportunities – sadly, not interactive ones – that let you decide whether to increase your current skill or maximum potential. Essentially, Road to the Show trades in a bunch of small decisions, like how and when to invest XP, for a few big ones. You need to balance future potential with current ratings gains.

Generally, I like the direction this mode is heading; it doesn’t feel completely new, but it is a bit more interesting. Thanks to this reimplementation of its progression system, Road to the Show feels fresher than Franchise and is the most enjoyable offline mode in the MLB The Show 18.

A bunch of other additions are worth mentioning, but didn’t significantly impact my enjoyment. The new batting stance creator is a neat technical achievement, but most will probably only use it once or twice when creating their Road to the Show player. The ability to play Franchise games using the throwback Retro Mode is not something I will ever do, but might hold value for someone looking for a more casual experience. Lastly, the three included legend teams are fun to play with, especially when playing locally against a buddy on the couch.

While much of this is a disappointment brought on by consistently high standards for year-over-year improvement in this series, I want to reiterate that MLB The Show 18 is the best playing version there’s ever been, thanks to those numerous visual and gameplay-related upgrades previously mentioned. In fact, this might be the most authentic on-field baseball game ever produced.

Still, it doesn’t quite bring Ohtani-level excitement, simply because the offline modes, especially Franchise, haven’t been significantly improved or upgraded. In fact, where Ohtani represents the potential of a dynamic two-way player, MLB The Show 18 fits the mold of a more traditional pitcher who can pitch but not hit. It’s very good at one important thing while other aspects of its game are starting to regress.

If I had to score it now, ahead of being able to play online or Diamond Dynasty, I’d give it an 8.5, for “Great.” Check back early next week for the final review. 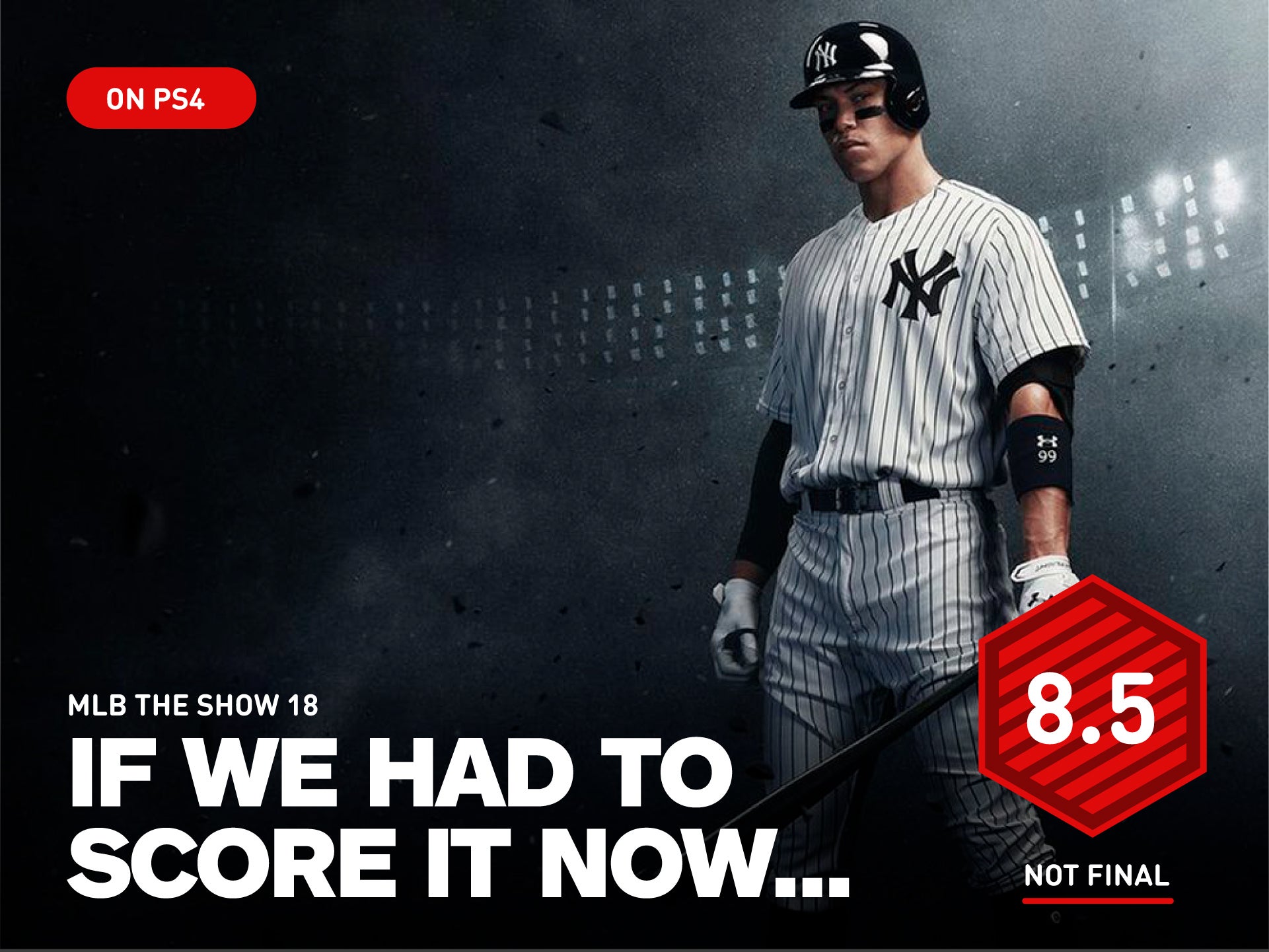 Sports bets beyond Nevada near legal success, but may fail as business