The LED functions can add to the gaming experience.

MSI has teamed up with SteelSeries to jump into the gaming monitor market with its new Optix MPG line of curved gaming monitors. The hook is that they feature RGB lighting on the front and back of the display that you can customize with SteelSeries GameSense software. You can tweak the lighting effects to show you vital stats and information for a game, such as health and ammo remaining, and more.

The MSI Optix MPG series comprises two models, both are 27-inch curved displays with VA panels, a 144Hz refresh rate, a 1ms response time, and AMD FreeSync. I reviewed the Optix MPG27CQ (See it on Amazon), which features a 2560×1440 resolution. The other model, the Optix MPG27C has a 1920×1080 resolution. 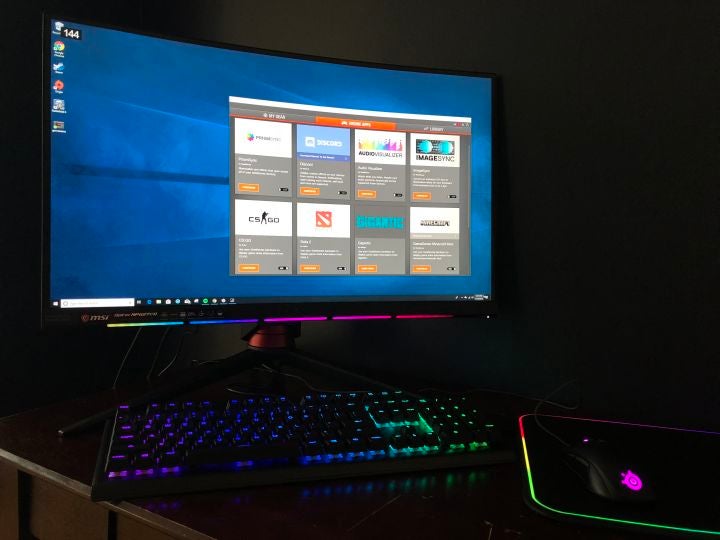 Before I get to the headlining feature of the MSI Optix MPG27CQ — its RGB lighting — let’s take a step back and look at its overall design. The monitor sits on a large, metal tripod, with two long legs in front and a short leg in back. The three legs keep the neck of the stand elevated, which gives the displays an airy, light feel and also lets you easily route your mice and keyboard cables underneath it.

The base of the neck is red — the only element of the display that isn’t matte black (with the exception of the RGB lights, of course). The neck has a hole in it to route your video, USB, and power cables. The stand is awesome in both its sturdiness and flexibility. The display is easy to adjust and stays right where I positioned it with no wobble. You can rotate the display 40 degrees in either direction, raise it about five inches, and tilt it five five degrees forward and 20 degrees back.

The display features a “frameless” design; the top and side bezels measure a minuscule 0.25 inches. The bottom bezel is only an inch thick, which is impressively thin considering it contains the five RGB LED bars. The power button sits in the lower-right corner next to a small LED that glows a dim white when the display is powered on. Around back is a tiny joystick that makes navigating the OSD a breeze.

The MSI Optix MPG27CQ works with the SteelSeries Engine app. Connect the monitor to your PC via USB (in addition to the video connection), and it appears under the My Gear tab of the Engine app alongside any SteelSeries peripherals you have. You can customize five lighting zones on the front of the display and two in back. The software is easy to use and, as with an RGB mouse or keyboard, you can select colors and effects for the display’s various LED zones. I found the lights to be useless at best under normal Windows use. After a few minutes of use, I dug into the OSD to disable them.

I turned them back on after customizing them for CS:GO. Game support is minimal (see gaming section below), but you can configure the LEDs on the Engine Apps tab of the SteelSeries Engine app to show you information for a handful of games, which I’ll cover in more detail in the next section. Unfortunately there’s no way to have them disabled for Windows, but enabled for games, which in my mind would be ideal.

I used Lagom LCD monitor test pages to measure performance including gamma, black and white levels, color gradient, and response time. Gamma was a bit low at 1.9, resulting in images that were a bit washed out when viewing photos. It was less obvious with games.

The low gamma also affected its performance on the black level and white saturation tests. I was able to see 16 of the 20 boxes on the black level test and could make out an additional box by raising the display’s brightness and contrast. I saw similar results on the white saturation test, where I could see 12 of 14 boxes and could make an additional box visible by lowering the contrast, which negatively affected the image outside of increasing the white saturation level. On the gradient test, there’s was obvious banding in the last third of the dark side of the test. On the response time test; the display was only mediocre, showing flicker in half of the test squares.

In real-world game tests, the MSI Optix MPG27CQ performed admirably. Battlefield and Counter-Strike: Global Offensive both looked smooth and showed accurate colors at 2560×1440. I witnessed no stuttering or tearing. One of the drawbacks of a VA panel vs. an IPS panel is the viewing angle isn’t as wide. On a large 27-inch display, the image can look a bit dull toward the sides because you begin to see the edge’s of the panel off-axis when seated directly in front of it, but the curved shape of the Optix MPG27CQ prevents such a thing. The display looked vibrant edge to edge. And the 1800R curvature of the display is so subtle that you quickly forget you are staring at a curved display.

I approached the MSI Optix MPG27CQ gaming monitor and its abundance of LED lights with skepticism. After all, why would I want RGB LEDs blinking at me from my display? By default, the five LED bars below the display cycle through a rainbow of colors. Under normal Windows use, the lights are distracting. After customizing them for Counter-Strike: Global Offensive, however, my stance softened a bit. After playing CS: GO for a few hours on the display, I actually found them to be a useful aid.

But that’s true for only a handful of games. At present, only six games are supported: Counter Strike: Global Offensive, DOTA 2, Gigantic, Minecraft, Utopia 9, and iFeelPixel. In addition, you can configure the lights for Discord notifications and three other apps. For CS:GO, I used SteelSeries GameSense to configure the display’s LED panels to show me my health, ammo and round kills. I found it easier to glance at the bottom edge of my display to see how much health I had remaining or check if I needed to reload my weapon than needing to look down at RGB lights on my SteelSeries keyboard or mouse.

In addition to the five zones on the front of the display, there are two zones on back. The two on the back panel are useless unless you are at a LAN party and want to communicate details of your character’s status to teammates, although in a gaming battlestation setup they’ll likely bounce off your wall and contribute to your room’s ambiance.

The MSI Optix MPG27CQ is consistently sold for $550 or more at most online merchants, but it is sold for $450 or a little less on Amazon:

If the list of supported games keeps growing, the MSI Optix MPG27CQ and its RGB lights will become a more attractive proposition. As it stands now, you’ll likely keep the lights disabled the majority of the time and enjoy the display on its own merits as a fast 1440p panel at a reasonable price.

Apple Will Finance Scorsese’s Next Movie, Paramount to Release Killers of the Flower Moon

After sharing his leukemia diagnosis with the world, Carlos Carrasco (@Cookie_Ca…

Black Friday 2018: The best tech deals worth waiting for

“Tell the blogs eat it up!” @kcamp thanked Jalaiah Harmon and her friend Skylar…