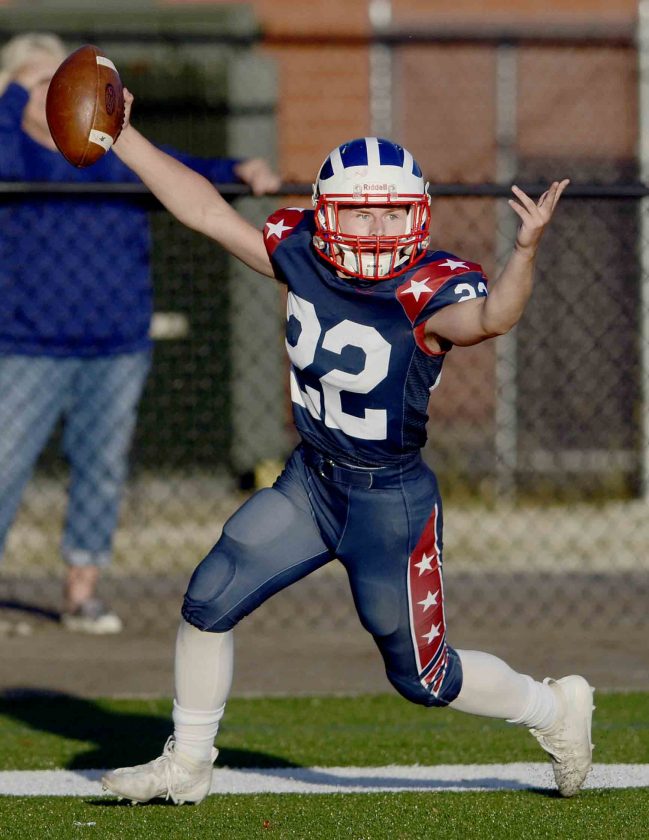 NILES — Bands from both Howland and Niles featured music from the 1980s Thursday during halftime of the season opener between the Tigers and Red Dragons.

A song that was left out of the mix, Pat Benatar’s “Hit Me With Your Best Shot,” would have been an appropriate addition.

For three quarters, the backyard rivals went back and forth like a pair of heavyweights. Blows were answered by both teams until Niles eventually landed a couple of fourth-quarter knockout punches. The result was a Red Dragons’ 35-21 win at Bo Rein Stadium.

Niles junior Travis Molnar scored from five yards out to break a 21-21 tie with 6:10 left in the contest. Howland’s ensuing possession saw the Tigers advance to their 40 yard line. Then on a fourth-and-1 play, Niles senior linebacker David Mays tackled Howland fullback Keith Cruze for a two-yard loss.

Niles then sealed the win when Joe Gallo broke through for a 41-yard run on a third-and-13 play. That was followed by a Zack Leonard 2-yard gallop to complete the scoring. 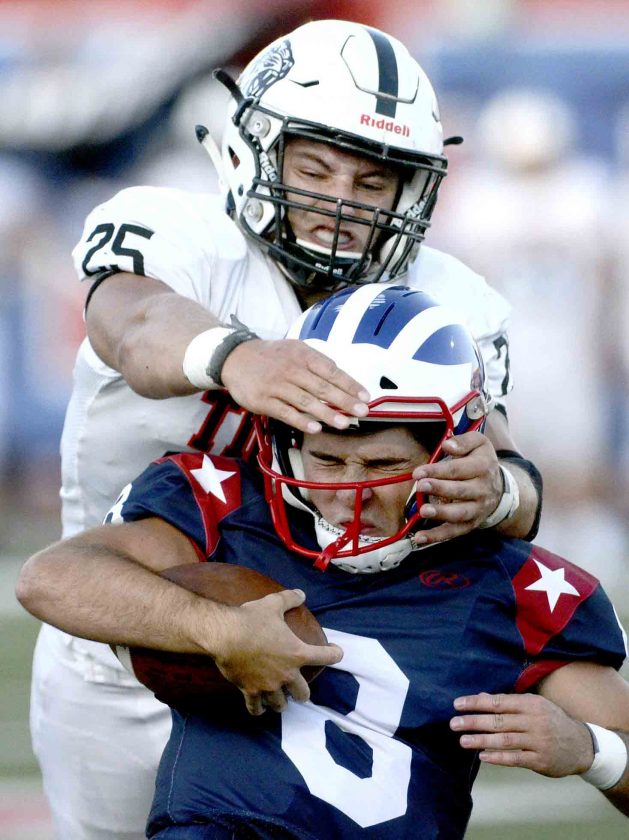 Leonard accounted for four touchdowns. He rushed for a pair, and also completed 13 of 19 passes for 167 yards and two scores.

Molnar led all rushers with 115 yards on 25 carries.

Howland was led by junior quarterback David Burman, who completed eight of 15 passes for 120 yards and rushed for a TD. Garrett Deemer gained 32 yards on nine carries.

Niles outgained Howland in total yardage 367-160. However, big plays by the special teams and defense kept the Tigers in the game.

“We had some breakdowns and we just couldn’t put them away but that’s a credit to (Howland coach) Steve Boyle and his staff,” said Niles coach Jim Parry. “The key to this game was how we responded each time Howland hit us with a big play. 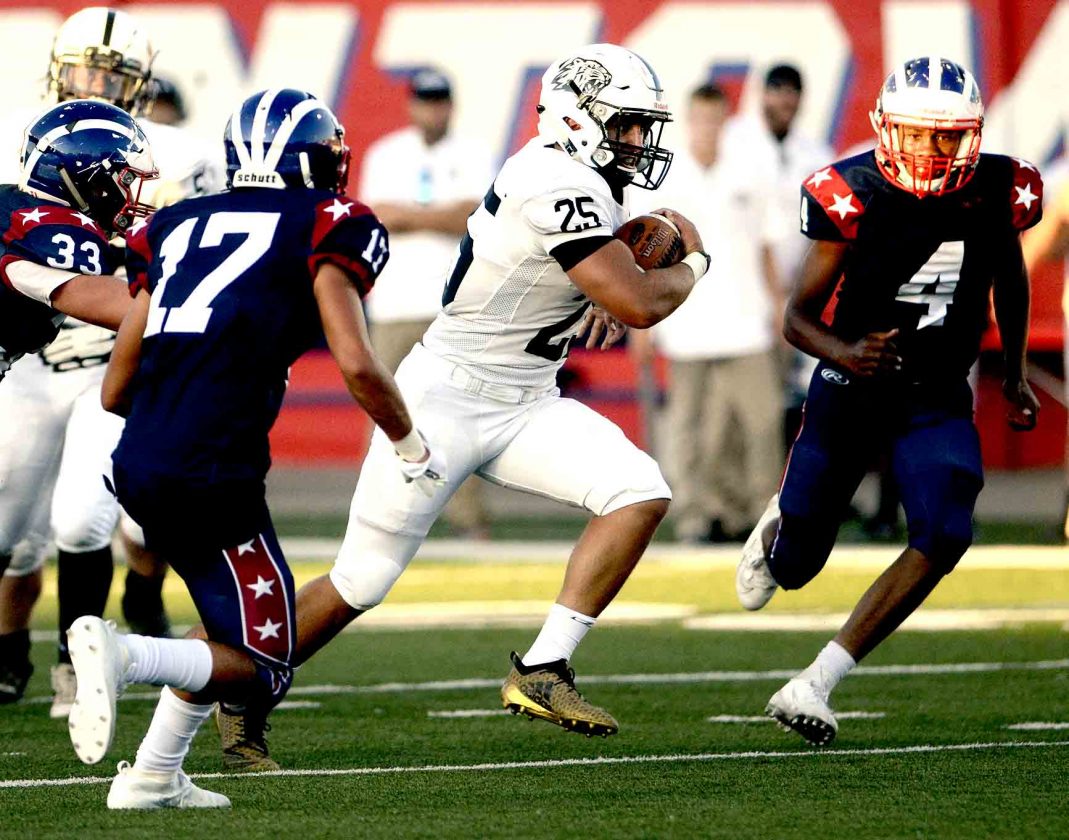 “Each time we were met with adversity we answered the call. That’s a very positive sign.”

Both teams scored on their first possessions of the season.

Niles took the opening kickoff and marched 76 yards on 12 plays to take a 7-0 lead. The possession which ate up more than half of the first quarter was capped by a Leonard-to-Molnar 8-yard pass.

Howland responded with its own 12-play drive of 80 yards. Burman’s one-yard run and extra point kick tied the game at 7-7 in the early stages of the second quarter.

After Leonard scored on a 10-yard run with 1:37 left in the half, it appeared that Niles would take a 14-7 lead into the locker room. However, William Hines returned the ensuing kickoff 90 yards to tie the game at 14-14. 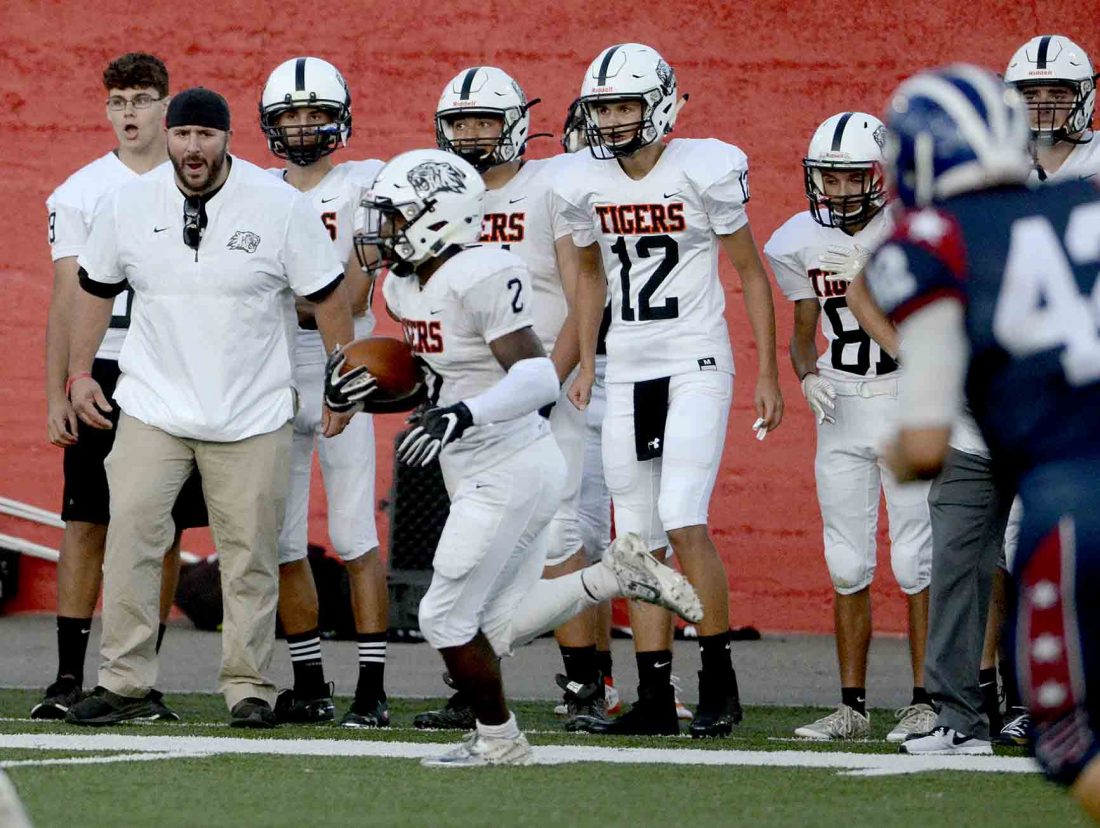 Tribune Chronicle / R. Michael Semple
Howland’s William Hines races down the sideline and returns a kick-off for a TD against Niles during late second-quarter action.

Leonard hooked up with David Mays on a 60-yard pass giving the Red Dragons a 21-14 advantage at the break.

“That was a huge response,” Parry said. “Howland could have gone into the locker room with all the momentum. For us to score (with 29 seconds left in the half) was a huge swing.”

Howland tied the game one last time when Deemer recovered a fumble and ran it in from 35 yards out with 7:10 left in the third quarter. Niles then scored 14 unanswered points.

“In that fourth quarter, we kept telling our guys that we just needed to maintain possession, we needed to keep moving the chains,” Parry said. “The offensive line stepped up. We had a lot of guys make big plays when we needed them.” 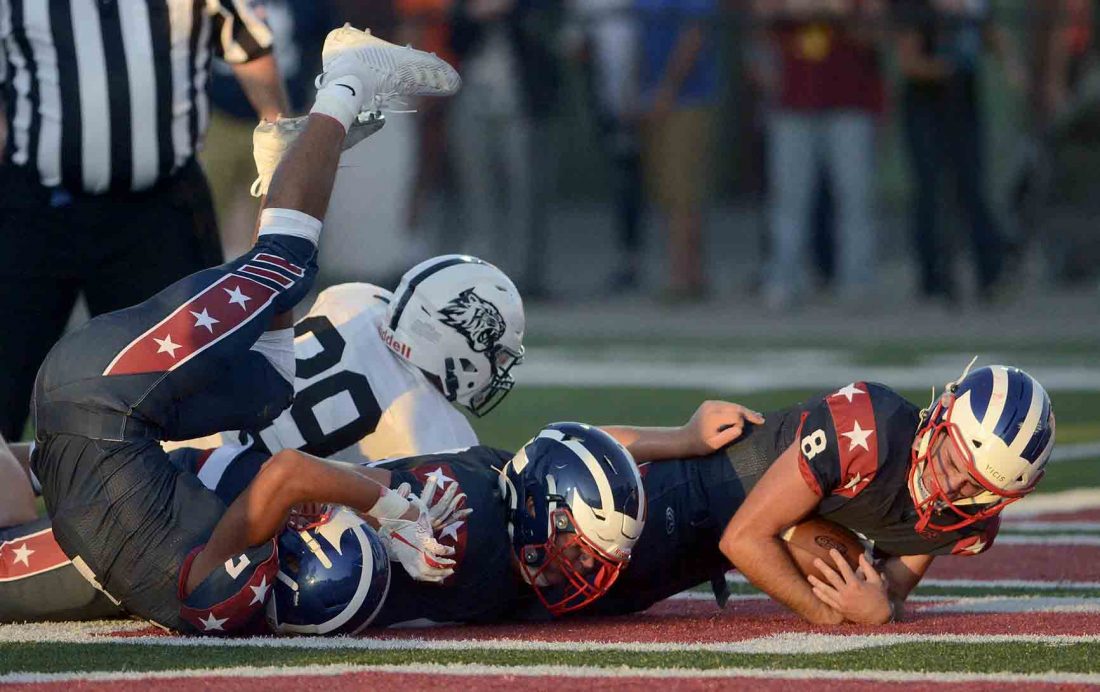 “It’s always big to win the opener. That’s especially true when it’s against your arch-rival. Hopefully we can build on this momentum.”

Meanwhile, Boyle was pleased with the effort of his Tigers.

“Things didn’t end up the way we hoped, but that was a great battle between two teams who left it all out there,” Boyle said. “Both teams played really hard, really clean football.”

“We had a few plays that didn’t go our way offensively and that put a strain on our defense. But overall, I was extremely proud of the way we kept battling back. Even though we lost, we can use this as a learning moment and as a building block for the future.”

Howland will look to rebound next week at Hubbard. Niles travels to Alliance.

The CW goes live on Hulu with Live TV – TechCrunch

The 4K, 144HZ Nixeus NX-EDG274K is loaded with enthusiast features

Even though he wasn’t involved in the play, @JoelEmbiid still got a technical fo…

Plants vs. Zombies: Battle for Neighborville Is Available Now in Early Access