Never let it be said that event comics are limited to Marvel and DC. BOOM! Studios kicks off its most ambitious Power Rangers story to date with “Shattered Grid,” a crossover that unites the original Mighty Morphin crew with half a dozen other Ranger teams. This story promises plenty of scope and spectacle, but it’s refreshing to see that writer Ryan Higgins and artist Daniele Di Nicuolo are more concerned with establishing the emotional stakes of this story first.

Readers coming in cold with this storyline might not notice anything particularly amiss right away. The opening prologue offers some sense of the conflict to come, but for the most part, this issue is devoted more to team drama than anything else. Higgins writes his characters as restless and furtive after Lord Drakkon’s escape, simultaneously gearing up for another major battle and also trying to find a sense of normalcy in their personal lives. Higgins even devotes a significant portion of this issue to Tommy and Kimberly’s awkward, fledgling romance. Between that and the fun banter between Billy and Trini, there’s a low-key, charming quality to this issue. And as someone who’s experience with the non-MMPR shows is very limited, I appreciate the creators not bludgeoning readers over the head with a giant cast of characters right away. 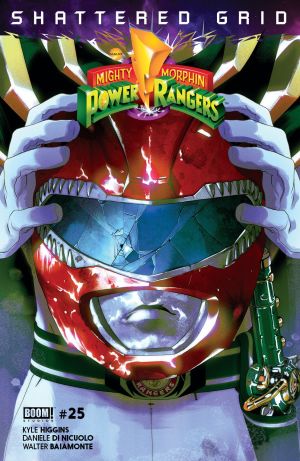 In a way, that approach only enhances the impact of the more dramatic moments in this issue. Even as Higgins and Di Nicuolo explore the privates lives of our heroes, they’re also chronicling Drakkon’s actions and his return to full power. There’s an unsettling undertone to this issue that slowly builds until the dramatic final scene. However slow this issue may start out, it makes a strong statement by the end. Those final pages deliver all the incentive readers will need to keep following “Shattered Grid.” In the process, this story showcases the benefit of a licensed comic that’s not bound by any particular plot restrictions. Higgins is free to break his toys in a way that wouldn’t be possible if Mighty Morphin Power Rangers were still on the air.

Di Nicuolo’s clean, presentable style helps maintain the visual tone established by Hendry Prasetya on this series and Dan Mora on Go Go Power Rangers. This comic won’t bowl you over with the sheer amount of detail on the page, but the storytelling never falters. Character emotions are cleanly rendered, and the action is marked by a sense of kinetic energy. Walter Baiamonte’s colors also do a lot to inject more energy to the story. Baiamonte helps each setting have a distinctive look and feel despite the sometimes minimal background details.

Mighty Morphin Power Rangers #25 kicks off the “Shattered Grid” storyline on solid footing. This issue hints at the massive scope of this event, but the focus remains fixed on the core cast of characters and their conflict with Lord Drakkon. This issue is all about building emotional stakes for the conflict to come, and it certainly succeeds in that goal.

History was made as @Vivek brought his @SacramentoKings to India, facing the @Pa…