The Duchess of Sussex and Prince Harry joined Prince William and Kate Middleton for the first time tonight since the pair spoke of their struggles with public life in a revealing documentary.

Harry and Meghan were seated in the second row of Royals behind Prime Minister Boris Johnson and his girlfriend Carrie while William and Kate were seated beside the Queen at the Royal Albert Hall in South Kensington, West London for the Royal British Legion Festival of Remembrance.

Meghan donned an elegant black fit and flare dress tonight paired with a pair of £621.72 Deneuve Bow Pointy Toe Pumps at the service – also attended by The Queen, Boris Johnson and hundreds of servicemen and veterans.

The event is the first time the Sussexes and Cambridges have appeared in public together since Harry and Meghan opened up about their struggles in an emotional television documentary.

Harry told an ITV documentary how he still struggles to deal with the ‘incredibly raw’ death of his mother, Princess Diana. He also admitted that his anxieties require ‘constant management’ and said felt he and his brother were on ‘different paths’. 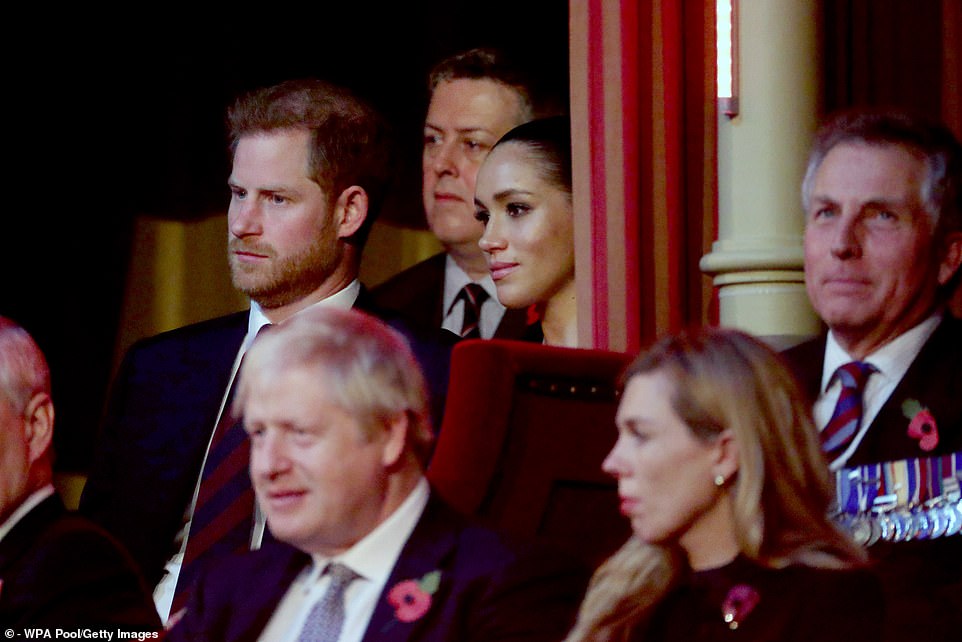 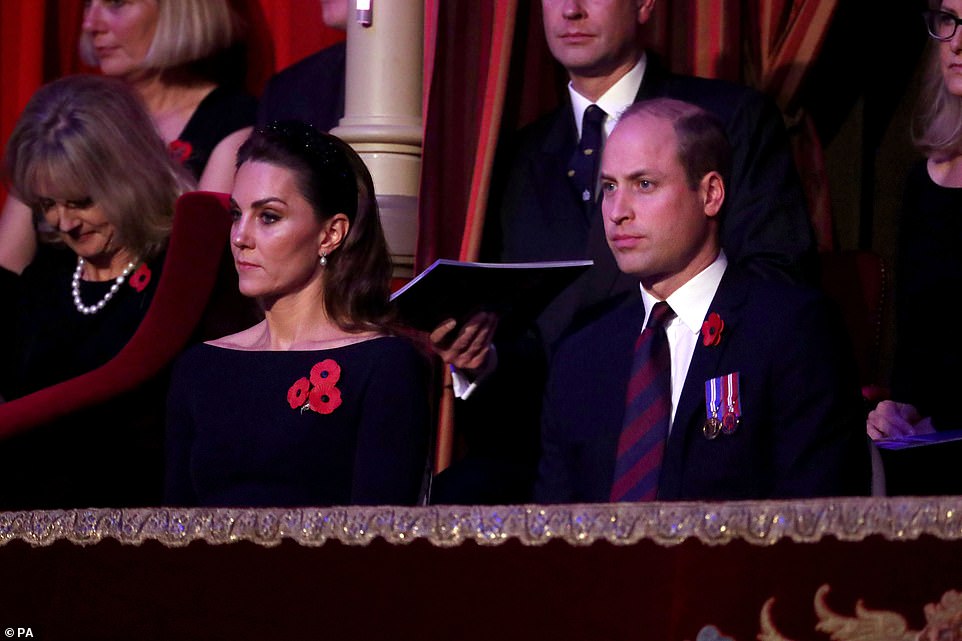 William and Kate were seated beside the Queen at the Royal Albert Hall in South Kensington, West London for the Royal British Legion Festival of Remembrance 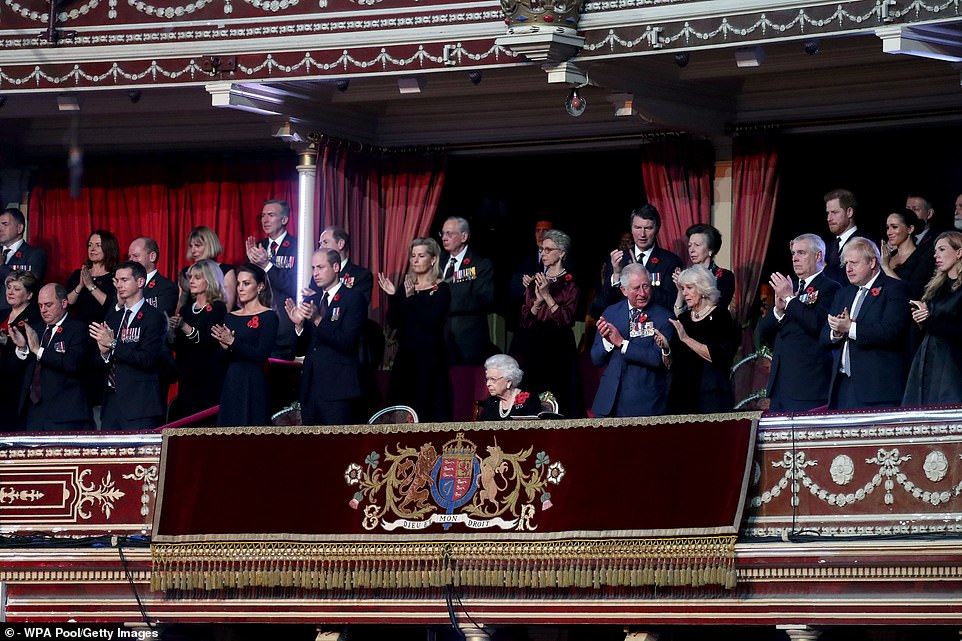 Harry and Meghan were seated in the second row of Royals behind Prime Minister Boris Johnson and his girlfriend Carrie (right) while William and Kate were seated beside the Queen at the Royal Albert Hall in South Kensington, West London for the Royal British Legion Festival of Remembrance (centre, left) 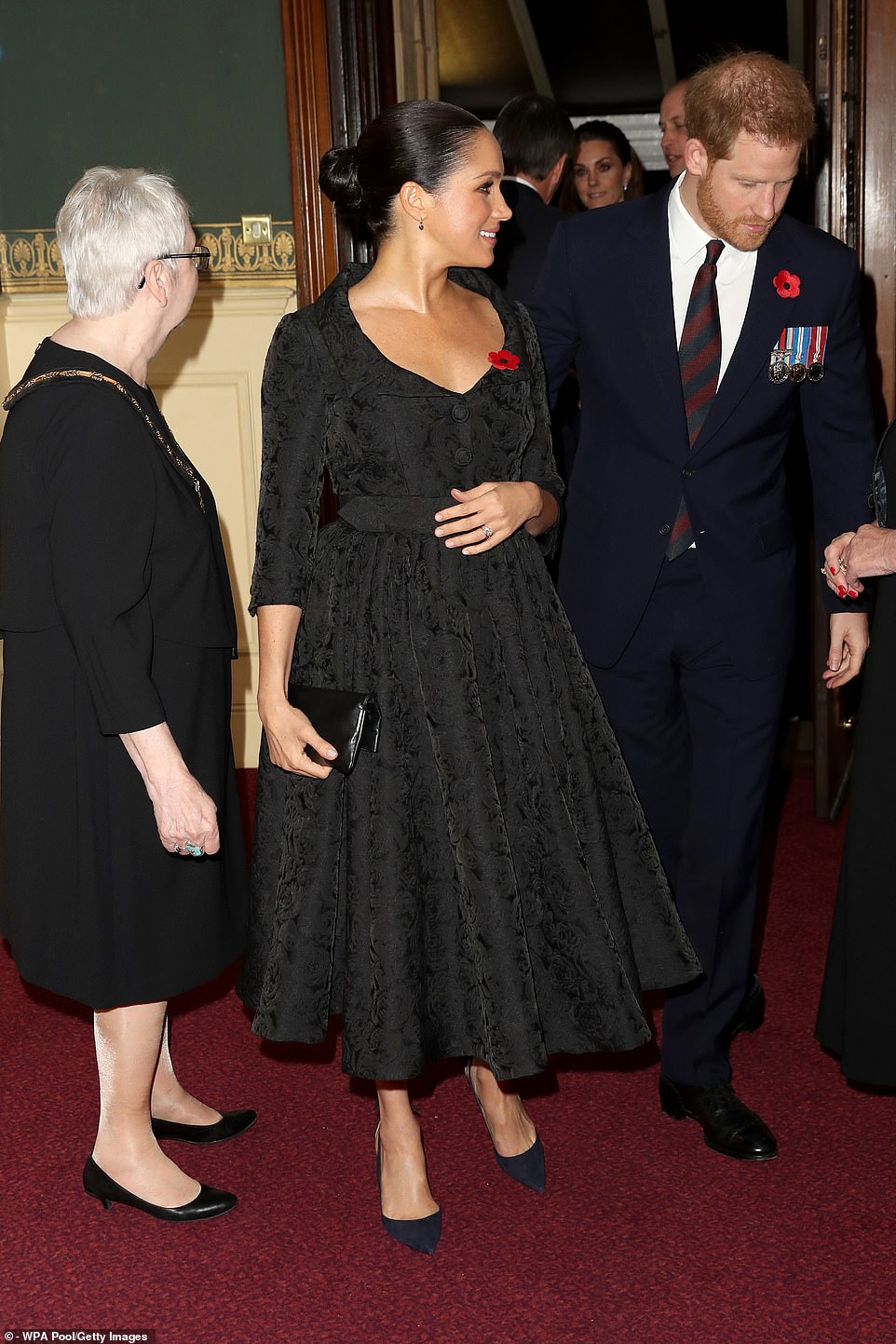 The Duke and Duchess of Sussex (pictured in the foreground) appeared to arrive before Prince William and Kate (pictured in the background) for the Festival of Remembrance. During a candid ITV interview last month, the Duke of Sussex acknowledged there had been deepening tensions between himself and William, following months of speculation about the state of the brothers’ relationship

Meghan meanwhile told of the the pressure of life in the spotlight, saying she had ‘no idea’ of the struggles she would deal with as a member of the Royal Family.

She revealed her friends warned her not to marry Harry because the media focus would ‘destroy your life’, and admitted that since the wedding and during her pregnancy she felt ‘vulnerable.’

Harry’s comments in the documentary reportedly sparked concern throughout the Royal Family and among those around them.

Royal commentator Phil Dampier, who wrote ‘Royally Suited’ about Harry and Meghan’s romance, said senior royals ‘from the Queen down’ are concerned and branded the Sussexes’ comments in their new documentary ‘very serious’.

Mr Dampier said: ‘They had turned a corner with the Africa trip but all the good works were overshadowed by this attack on the press. They are either being badly advised or ignoring advice.’

Also at the event tonight were the Duke of York, the Earl and Countess of Wessex, the Princess Royal, the Duke and Duchess of Gloucester, the Duke of Kent and Vice Admiral Sir Tim Laurence.

This year’s event marks 75 years since notable battles of 1944, which included Monte Cassino, Kohima and Imphal, D-Day and the collaboration of Commonwealth and Allied forces. 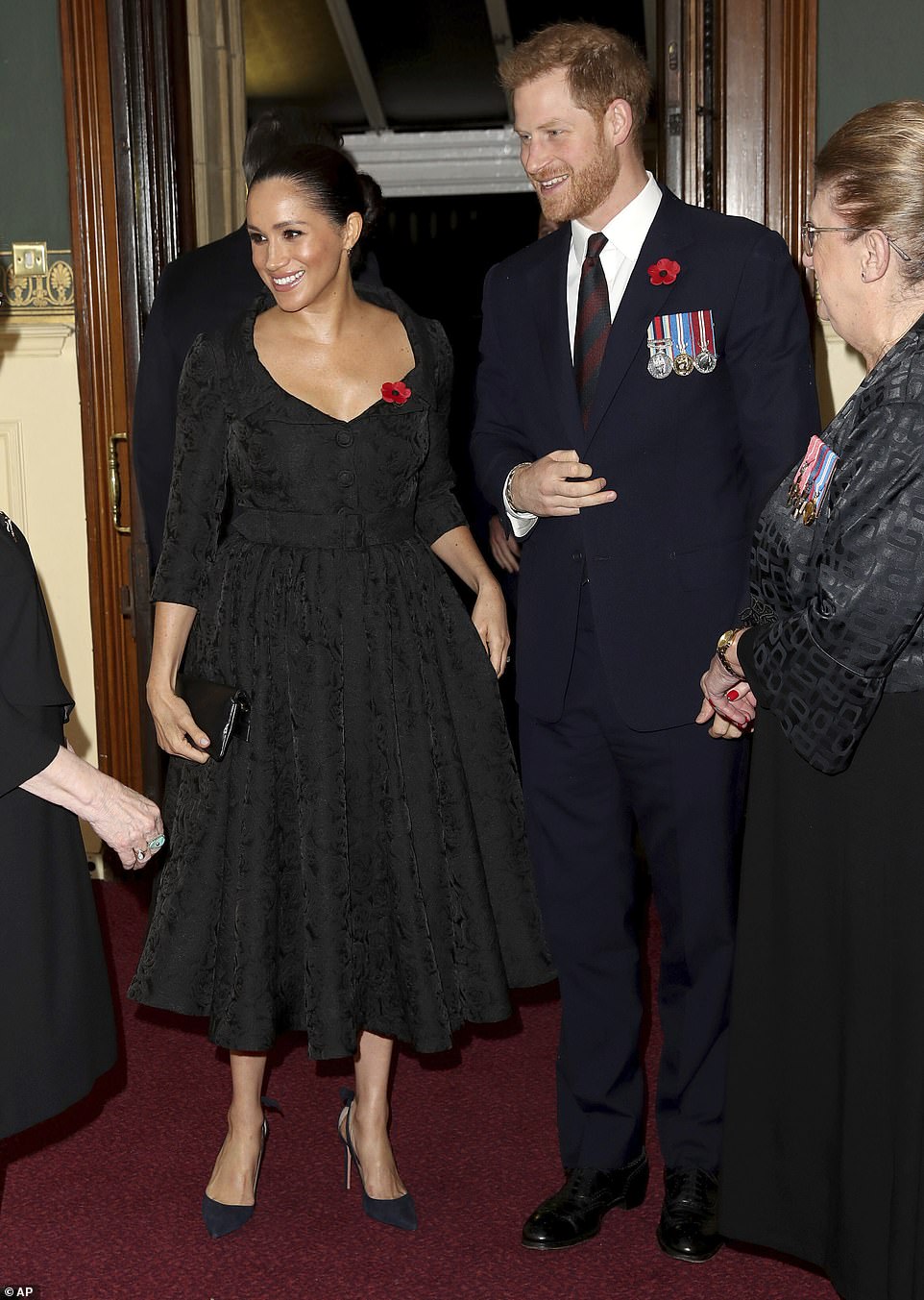 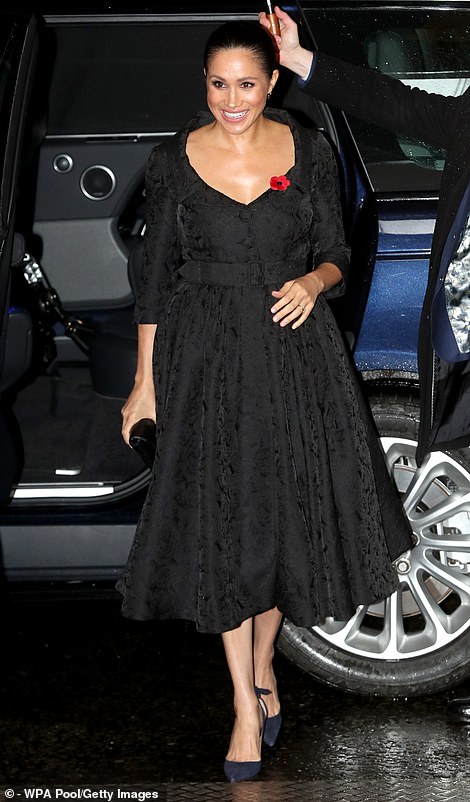 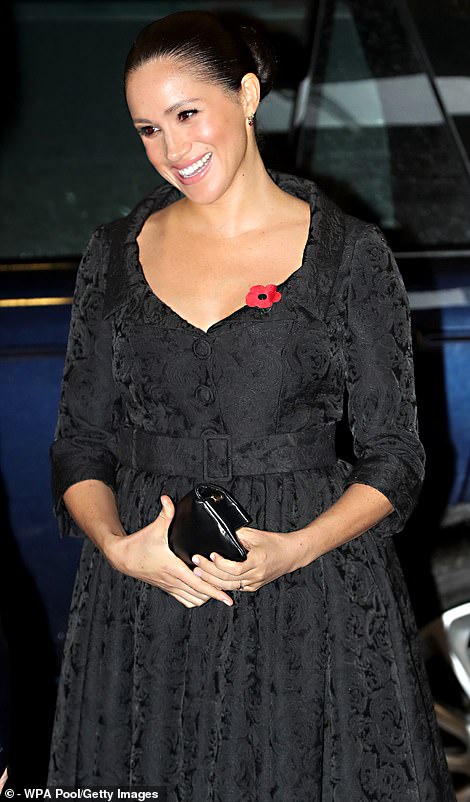 It also celebrates the 100th anniversary of the Government Communications Headquarters and pay tribute to RFA Mounts Bay which delivered supplies and aid to the Bahamas after Hurricane Dorian this year.

The ceremony is hosted by the Royal British Legion and commemorates all those who lost their lives in conflicts, with artists including James Blunt, Leona Lewis and Jeff Goldblum performing alongside the Central Band of the Royal Air Force and Band of HM Royal Marines.

During the candid ITV interview last month, the Duke of Sussex acknowledged there had been deepening tensions between himself and William, following months of speculation about the state of the brothers’ relationship.

He made the comments in a TV documentary broadcast last night where he also attacked the press over the public scrutiny that he and wife Meghan Markle have faced.

Harry said: ‘I will not be bullied into playing a game that killed my mum.’

The extraordinary attack against the media comes after he and Meghan launched legal action against several British newspapers.

Palace aides had repeatedly denied reports of a rift between the Sussexes and the Cambridges, who had once been championed as the Royal family’s ‘Fab Four’.

But asked how much of the speculation was true for an ITV documentary which aired last night, Harry pointedly refused to deny a falling out.

The 35-year-old initially laughed in response to the question, then added: ‘Part of this role, part of this job and this family being under the pressure it is under, inevitably stuff happens.

He added: ‘We don’t see as much as we used to because we are so busy but I love him dearly and the majority of stuff is created out of nothing.

Prince Harry, Duke of Sussex and Meghan, Duchess of Sussex visited the Nyanga Township during their royal tour of South Africa 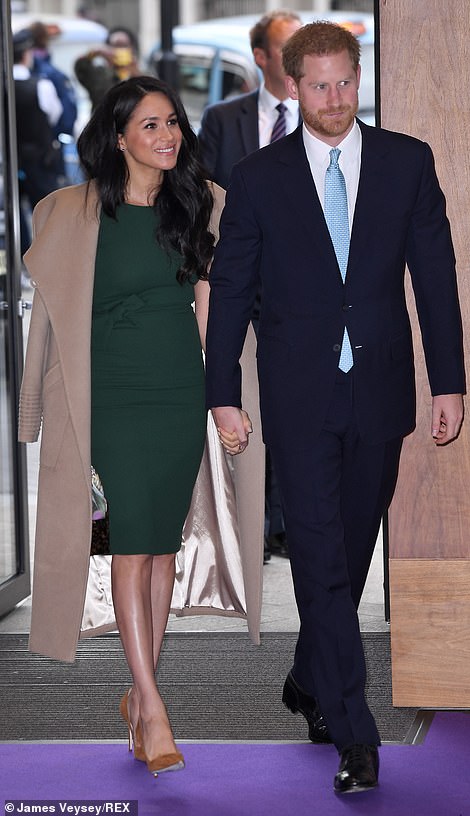 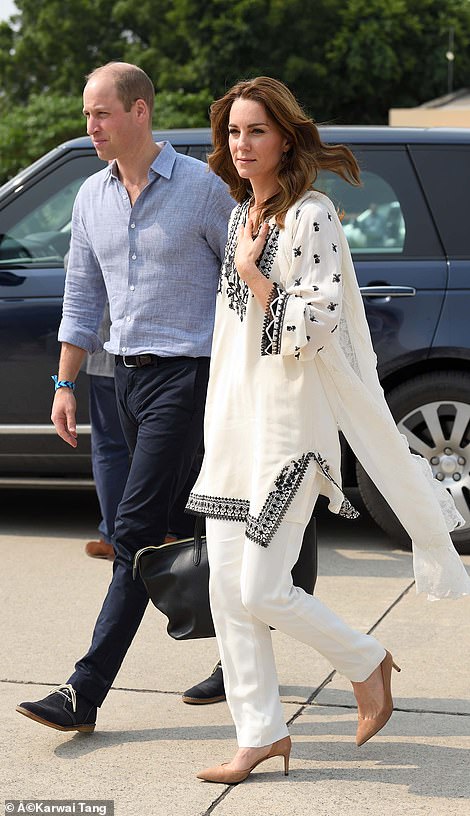 Speculation has raged about the state of Harry and William’s relationship in recent months, following the break-up of the so-called ‘Fab Four’.

Harry’s comments came during an emotional interview with ITV presenter Tom Bradby – a long-time friend of the prince’s.

His comments about William, 37, are likely to prove embarrassing for Buckingham Palace, which has sought to downplay reports of strains between the Cambridges and Sussexes.

Tensions reportedly arose in the run-up to last year’s royal wedding, with Harry apparently accusing his elder brother of failing to support him and Meghan.

William is also understood to have privately expressed concern about the whirlwind romance, while Kate is said to have struggled to get on with Meghan.

Matters came to a head when the Sussexes decided to move out of Kensington Palace to Windsor and split their joint household, moving their staff over to Buckingham Palace. The two couples have also parted ways over their charitable work, with Harry and Meghan set to launch their own royal foundation next year.

The break-up was said to be a mutual decision and one that was the result of a natural divergence of ways, as William’s role as heir to the throne evolves.

Despite the issues, the two Duchesses were pictured enjoying a family day out with their children in July as they watched Harry and William take part in a charity polo match, and sources have said the two couples are getting on better nowadays. 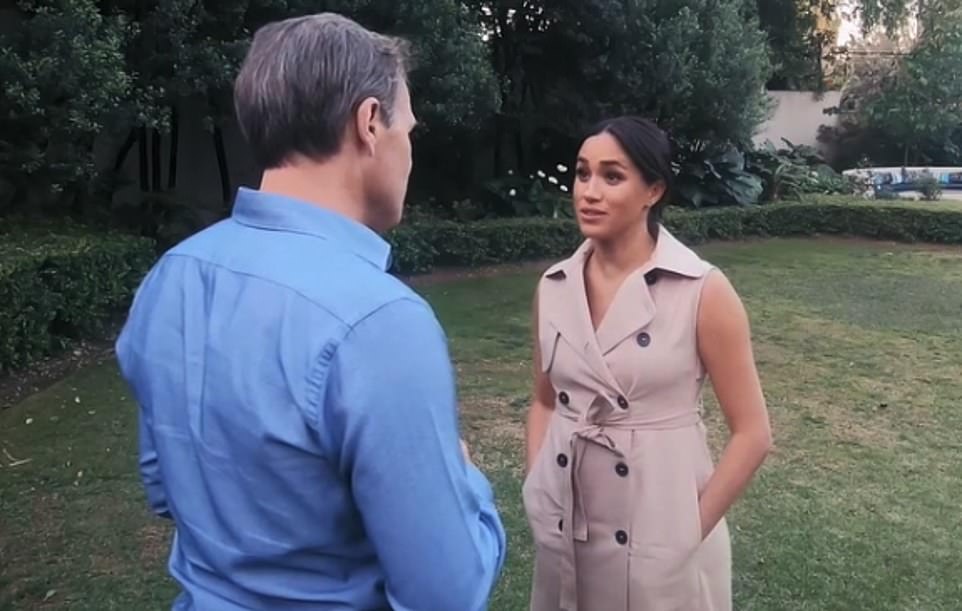 Microsoft attempts to spin its role in counterfeiting case – TechCrunch