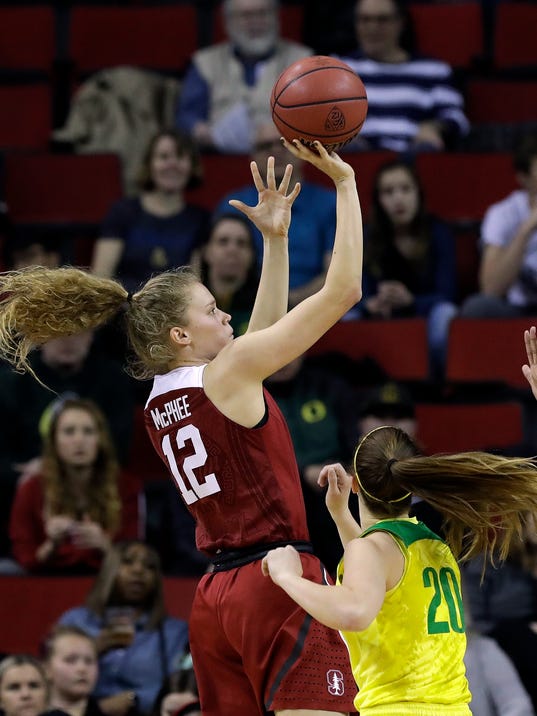 Stanford’s Brittany McPhee (12) shoots over Oregon’s Sabrina Ionescu during the first half of an NCAA college basketball game in the finals of the Pac-12 Conference women’s tournament, Sunday, March 4, 2018, in Seattle. (AP Photo/Elaine Thompson)(Photo: The Associated Press)

SEATTLE (AP) — All day long, Oregon coach Kelly Graves noticed something a little different about Pac-12 player of the year Sabrina Ionescu. It wasn’t something that could be defined, just something the coach noticed about his star player.

“She had a different look about her,” Graves said. “I didn’t know what that was going to translate to.”

Playing in their first conference tournament final, the Ducks looked every bit the part of a premier team heading into the upcoming NCAA tournament. Ionescu was the star, as the Ducks (30-4) avenged one of their two regular season losses in conference play.

A year ago, Oregon was the surprise of the NCAA tournament making an unexpected run to the regional final before falling to UConn. Now they’ll go into the tourney as one of the favorites.

Ionescu is a big reason why. The sophomore has been a standout all season but saved one of her best career performances for the final. Ionescu set a championship game record for points scored, hitting 14 of 24 shots, including a four of 3-pointers, the last of which set a new career-high for points. Her 3 from the baseline with 6:17 remaining gave Oregon 19-point lead and the Ducks coasted the rest of the way.

“I think it was just our mindset coming in to be honest,” Ionescu said. “I think we had some unfinished business, and our coaches did a great job on the scouting. We adjusted from what we did last game, and I was just ready.”

That unfinished business was the disappointment lingering from losing to Stanford in the only regular season meeting. The Cardinal topped the Ducks in Eugene by rallying from a nine-point halftime deficit and outscoring Oregon 46-24 in the second half. Brittany McPhee scored 33 points in the earlier win over Oregon.

“I feel like our team has been very resilient, very determined,” VanDerveer said. “We’ve worked very hard. Quite honestly, we lost to a better team today. They are a very skilled offensive team.”

The Ducks barely reached the final, needing a 10-0 run to close the game in its 65-62 win over No. 9 UCLA in the semifinals. But they looked the part of a champion in the title game. Ionescu, who had been quiet for nearly an entire quarter, scored 11 of the final 13 points of the third quarter for the Ducks and Oregon went to the fourth quarter with a 54-43 lead. Stanford never got any closer in the final 10 minutes

“We weren’t going to be complacent just getting to the championship game,” Ionescu said. “I knew we wanted to win this.”

Pac-12 commissioner Larry Scott said no decision has been made on the future location of the Pac-12 women’s tournament. KeyArena is scheduled to undergo a two-year remodel with construction expected to begin by the end of 2018. Scott said the hope was to have an announcement on a site before this year’s tournament, but a decision should happen in the next few months.

Stanford: The Cardinal lost in the tournament final for just the third time in 15 trips to the championship game. Stanford lost to Arizona State in 2002 and UCLA in 2006 in the finals. Stanford won the title last year as the No. 2 seed, knocking off top-seeded Oregon State in the finals.

Oregon: The Ducks probably don’t have a shot at a No. 1 seed in the NCAA tournament, but winning both the regular season and conference tournament titles should assure Oregon of a chance to stay out West. The regional is in Spokane, Washington and would be a friendly environment as Oregon coach Kelly Graves previously coached at Gonzaga.

Stanford: The Cardinal will be in the NCAA tournament and await their seeding.

Oregon: The Ducks await their seed for the NCAA tournament.

Copyright 2018 The Associated Press. All rights reserved. This material may not be published, broadcast, rewritten or redistributed.

How fast does glass crack? – The Slow Mo Guys

The Mandalorian: Jawas and the Show’s Planet Explained