Rafael Nadal was forced to dig deep inside himself as he dramatically claimed his nineteenth Major on Sunday when beating off a stunning fightback from 23-year-old Russian Daniil Medvedev to win the US Open.

Roger Federer may be left with a repeat dose of regret about his missed chances at Wimbledon after his lead in the great Grand Slam title race was cut to just one.

Nadal denied Medvedev one of the greatest comebacks in tennis history when he finally forged a 7-5, 6-3, 5-7, 4-6, 6-4 victory that took a breathless four hours and 51 minutes. 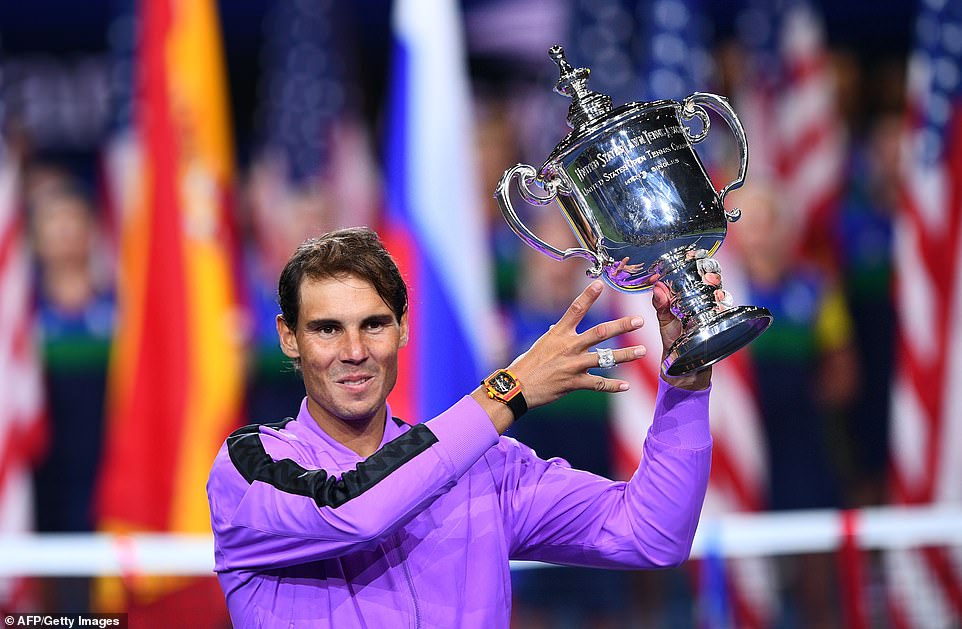 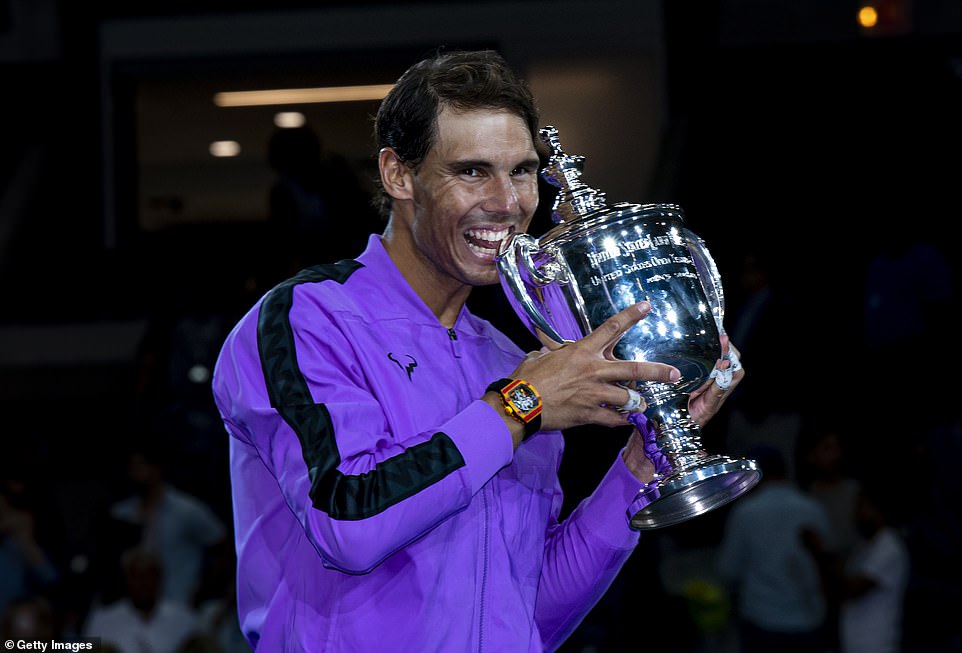 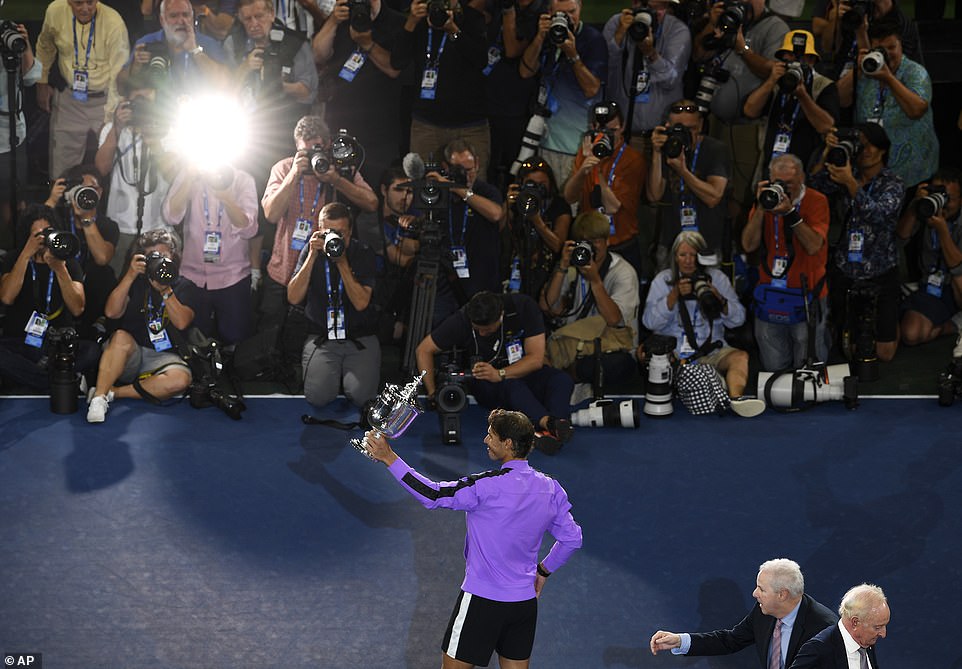 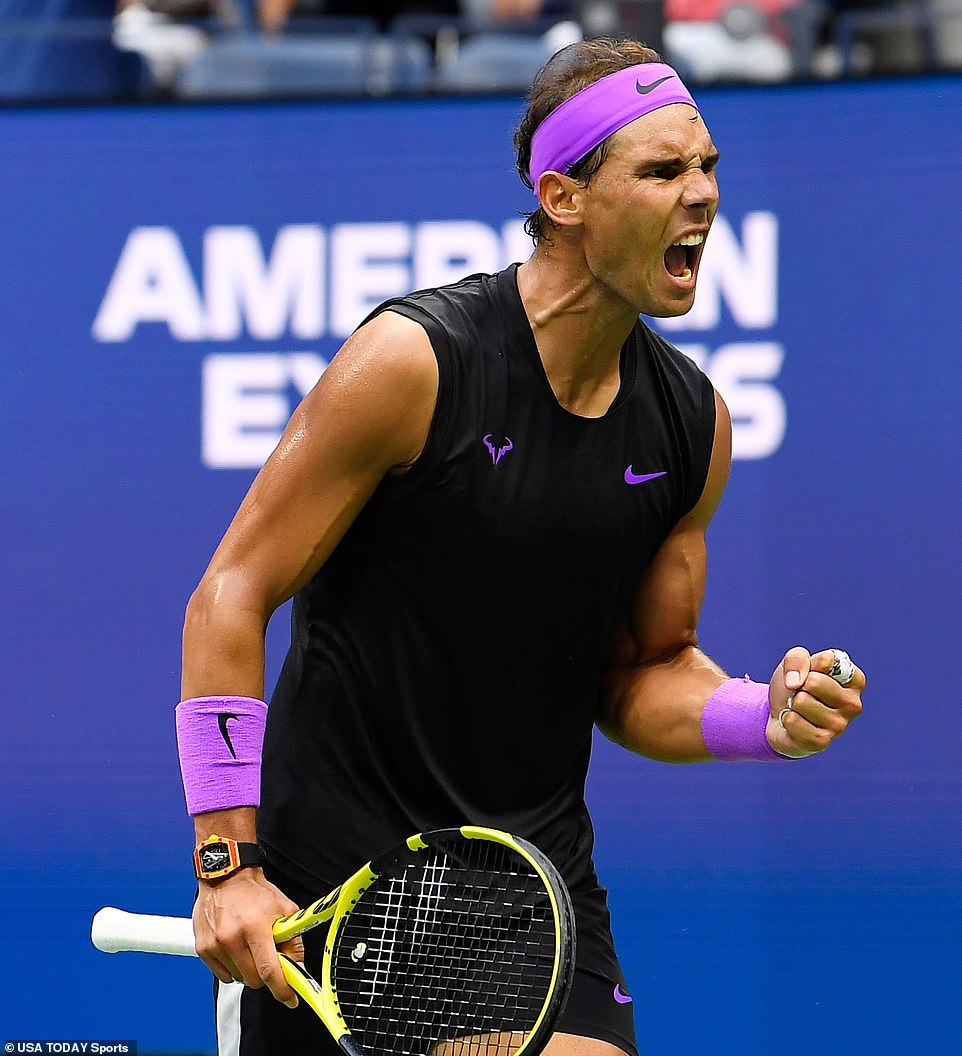 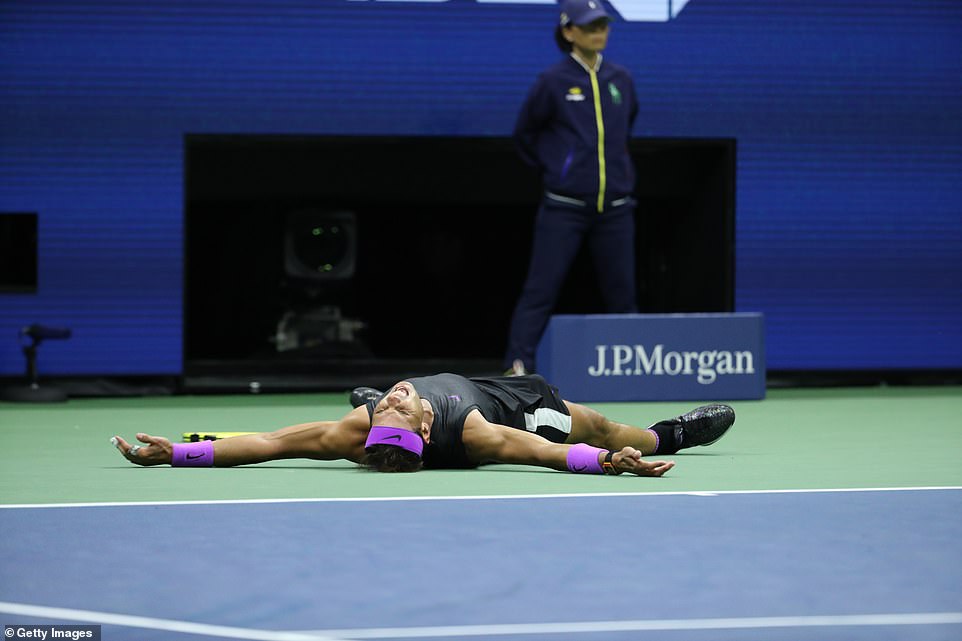 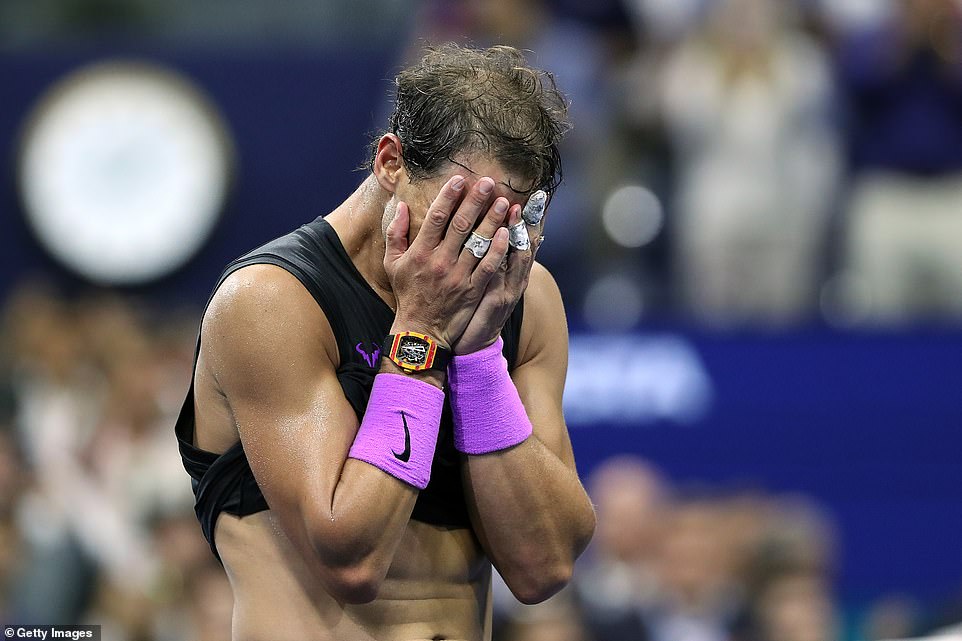 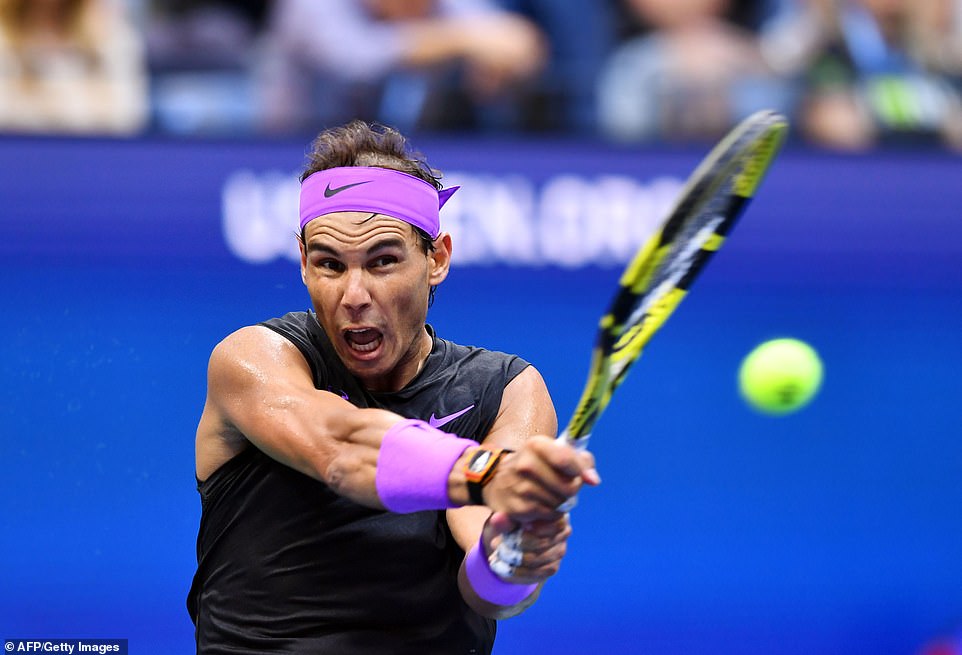 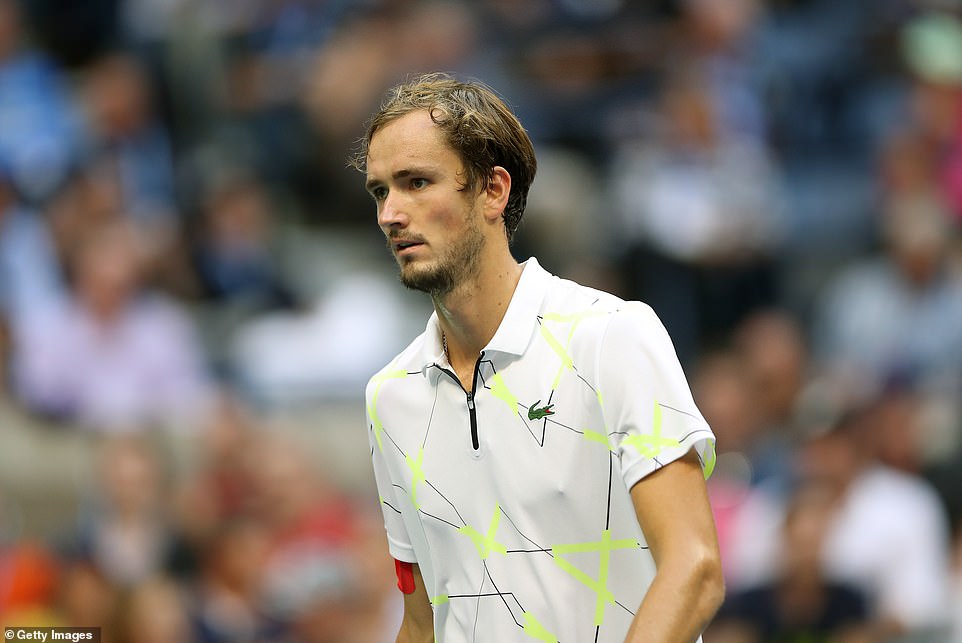 ’19 Grand Slam titles is outrageous, I want to congratulate him,’ said Medvedev.

‘In the third set in my mind I was thinking what I was going to say in my speech. I thought I have to fight for every ball and see how far it goes. It went far.

‘Earlier in the tournament I said something in a bad way but it’s because of your energy (the crowd) I’m here in the final. Tonight will stay in mind, it was electric. I am a human being I can make mistakes.’

Amid a feverish atmosphere they had run each other to a standstill by the end, when Nadal saved a last break point against himself to close it out. 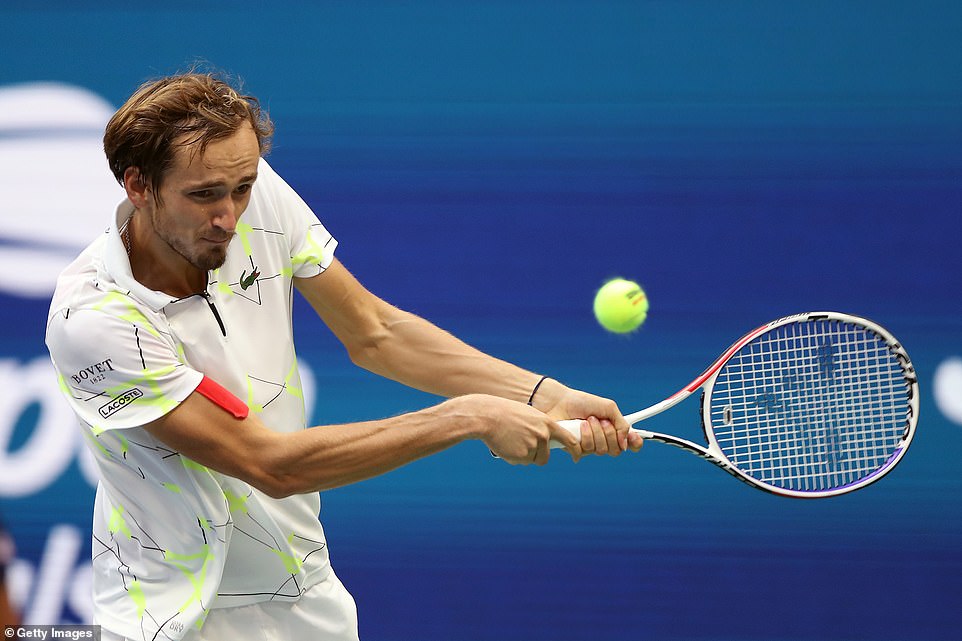 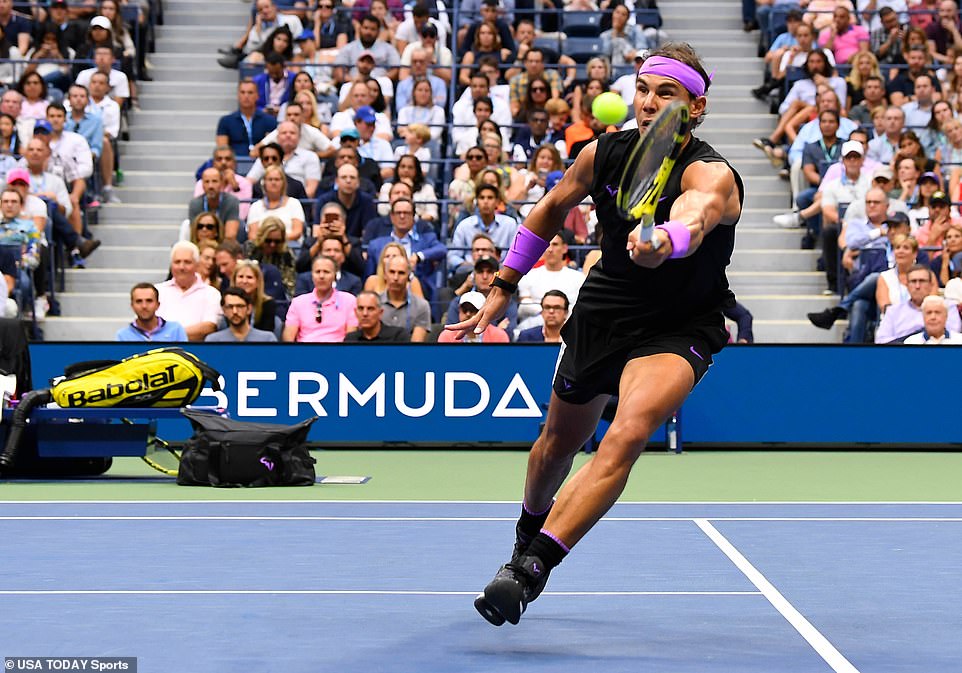 Nadal said: ‘It was an amazing final, I had the match more or less under control. Daniil had a great summer and tonight everyone saw why he is the No 4 player in the world already.

‘The way he was able to fight and change the rhythm of the match was fantastic. It is one of the most emotional nights in my tennis career.

‘This victory means a lot, especially the way match became so difficult, the nerves were so high after having the match under control, it was a crazy match.’

He got caught up in an epic struggle of gladiatorial combat after foregoing a break of serve advantage in the third set that had suggested a relatively perfunctory victory. Some of the lengthy baseline rallies had bordered on the dour before the Russian made changes to his game to come into the net more and gave the great Spaniard the fight of his life when within sight of another Grand Slam triumph.

With Novak Djokovic contending with shoulder injuries the odds have shifted towards him ending up with more of the biggest trophies than his two rivals. The Mallorcan will be forever associated with his clay court dominance but the fact that this was his fifth Grand Slam title on hard courts (four here and one in Australia) is a testament to his versatility.

But what a scare he got from a player who had lost all four of his previous matches that had gone five sets. His resilience made him the unlikely hero of this tournament, having become one its villains in the first week when he gave the crowds a defiant finger.

Medvedev’s volatile relationship with Flushing Meadows this fortnight was born out by the sporadic boos that greeted him as he walked out on court. As seen in the women’s final, New York does not do underdogs in the same way as Wimbledon.

The match, however, could hardly have started worse for Nadal in that he received a time violation warning in the very first game. He was then broken in his next service game, as Medvedev gave an early reminder that he can play like a human backwall. 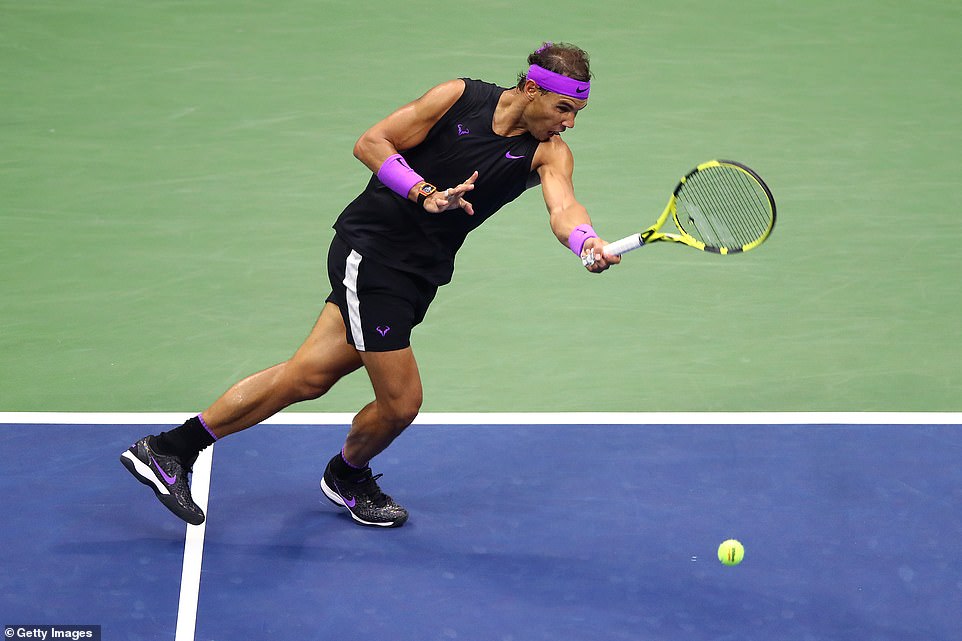 Spurred on by the boisterous crowd, Nadal pulled out a wide repertoire of shots to impose himself upon the US Open final 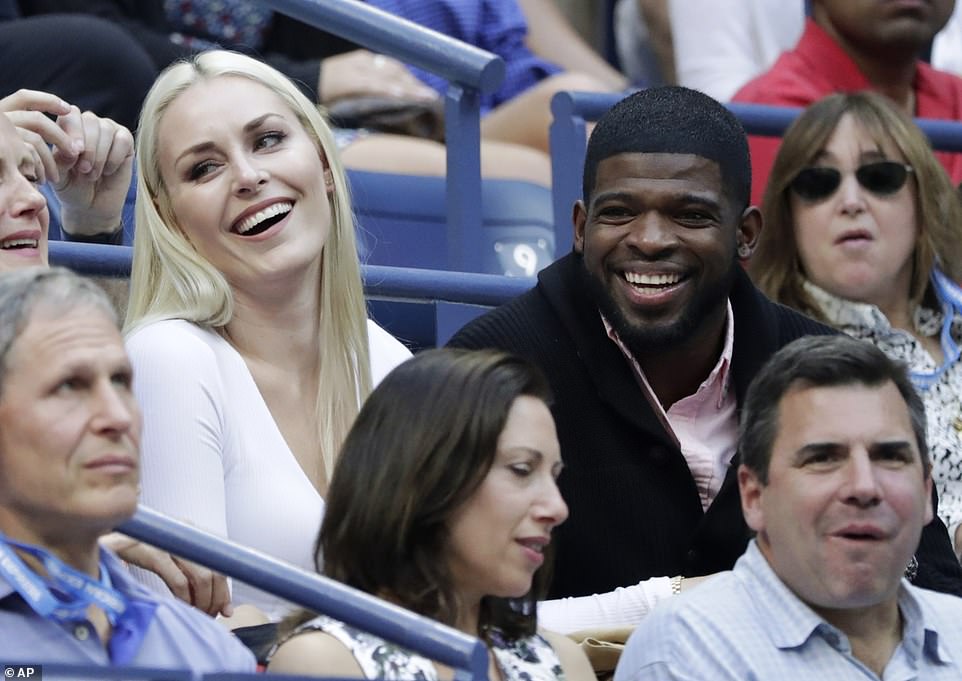 That break was quickly reclaimed and soon the Spaniard was piling on the break points, mixing up his spins and darting into the net whenever possible to discomfort his counterpunching opponent. It took until the twelfth game for that to properly pay off as on a second set point he gave the approaching Russian a high backhand volley, which he completely miscued.

Given the sheer amount of tennis that Medvedev has played in the last six weeks, and his self-admitted soreness, this looked a fatal blow.

For all his ease of movement for a tall man, soaking up the heavily-spun blows would be enough for peak Djokovic, let alone someone making their first Grand Slam final appearance against a man who has made 28 of them.

Medvedev, someone used to wearing opponents down, was having to use so much energy to stay in the points and his one-dimensional refusal to come to the net meant that he could not shorten the points.

Sure enough Nadal’s relentless pressure saw him break for 4-2 in the second and when he closed the set it was looking a long way back for the hard working Russian.

Redemption seemed even further away when he shovelled a backhand into the net to give Nadal a 3-2 lead with a break in the third.

Yet still he slapped the ball away from the back and when Nadal put a simple overhead wide at deuce in the next game that was the cue for the comeback to be launched. After getting to 6-5 he broke decisively, and by doing so garnered the support of the crowd.

The Stakhanovite Medvedev was now showing a far greater willingness to come in and it was paying off, with Nadal having to save a break point at the start of the fourth when the loss of games was threatening to become a haemorrhage. 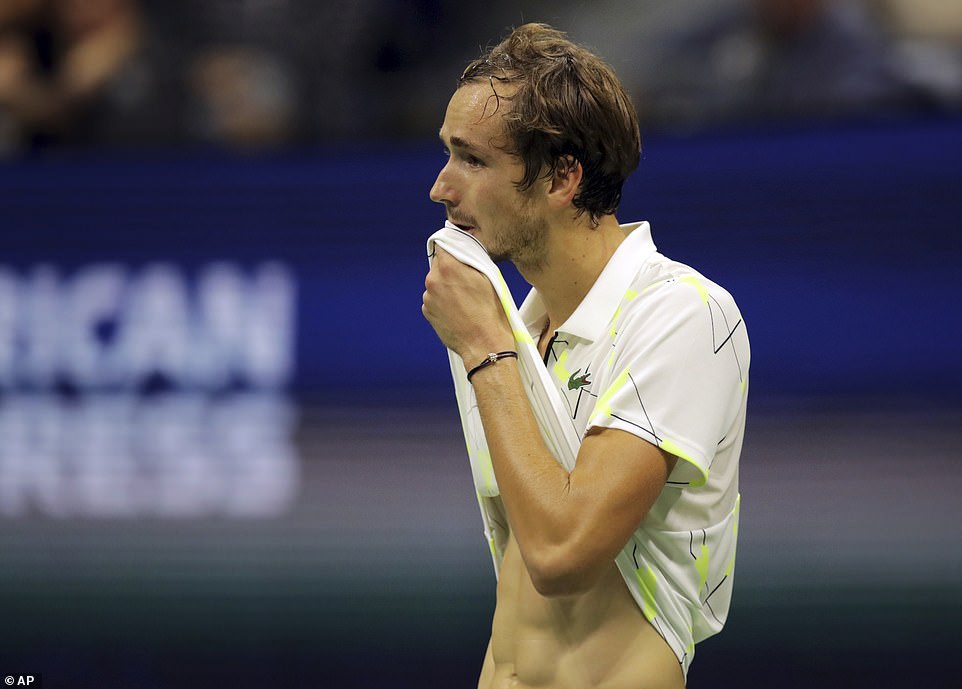 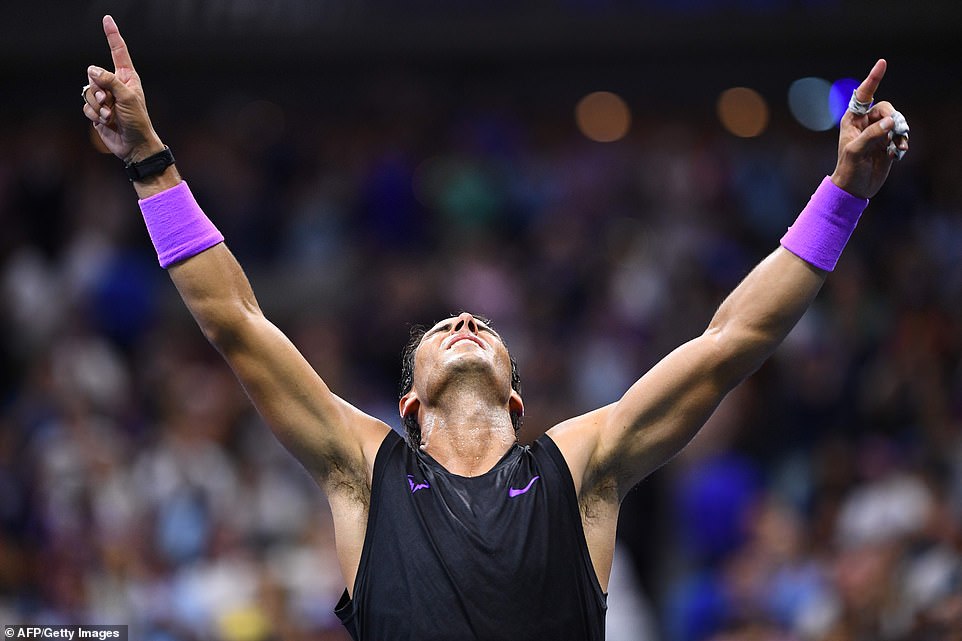 Nadal, for so long appearing in control, was overcome with emotion at the end as he closed the gap on rival Roger Federer

The Russian likes to play quickly and was complaining about the amount of time he was being made to wait between points as he began to serve and volley like some old style grass court player. He was not as smooth as, say, Stefan Edberg at the net but it was mightily effective.

Nadal’s level dropped with the on-court temperature and the incredible depth of Medvedev’s groundstrokes was proving increasingly unanswerable. He levelled the match with a backhand pass amid a roar of approval to take it down the home straight.

The physio came out to rub his thighs at the changeover and he missed three break points in the second game of the decider that could have smoothed his path. It cost him dearly when Nadal rasped a backhand past him when he was stranded at the net to take a 3-2 lead with a break, which was compounded when the Russian missed an overhead on break point at 4-2.

Nadal, by now cooling himself at the break with an air conditioning tube, dropped serve when trying to close out the match at 5-2, given another time violation by umpire Ali Nili.

At 5-3 against the Medvedev serve he created two match points, saved by a backhand winner and a serve and volley charge to the feared Nadal forehand, which was netted. He caused scares right to the death, and found himself saluted by the crowd as Nadal held his arms aloft.

Giulia Gwinn’s goal secured the win for Germany in a #WWC19 game against China....

Is the statue made of shoes or are the shoes made of statue? …

This week in games: Walking Dead resurrected, Baldur’s Gate 3 rumors, Into the Breach...

Nintendo Switch Lite inventory might be returning to normal after coronavirus...