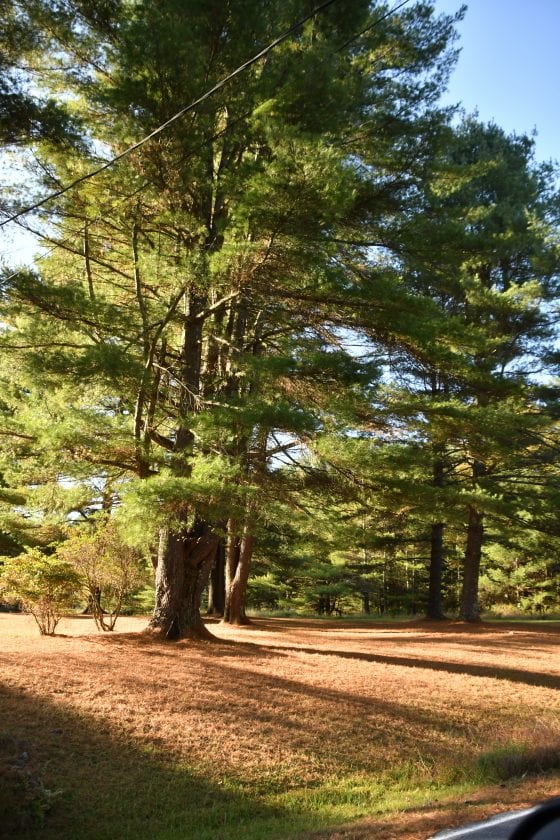 MARK NANCE/Sun-Gazette
The ground below a group of pines is yellow with fallen needles at a home on Calvert Road near the village of Calvert Wednesday. Despite the name “evergreens” coniferous trees, such as pines, spruce, hemlocks, firs, ect., do lose their needles at the end of a growing season, but, unlike more colorful deciduous trees, they lose their needles in patches and replace them immediately.

There may be a wet start to the week as temperatures descend into a seasonal average, according to a meteorologist with the National Weather Service in State College.

“This time of year, we do often get rain,” said forecaster Michael Colbert. “We’re transitioning into the cooler season when we get more coastal storms and stronger cold fronts compared to the summertime.”

The weekend’s rain, however, will have moved out by today with the sun expected to burn off patchy fog, he said. By the afternoon, there will be a high of around 65 degrees, before lowering to 50 degrees as a 40 percent chance of rain moves in.

A cold front will begin to “push” through Tuesday, said Colbert.

“A 90 percent chance of rain on Tuesday. That looks like half an inch to an inch of rain for Tuesday into Tuesday evening,” he said. “There’s a high of 62 degrees on Tuesday, and then down to 43 degrees Tuesday night.”

Saturday looks to be sunny, but chilly, with a high around 56 degrees. Sunday is expected to only heat up to 57, with a slight chance of showers.

“Normal temperatures right now are around 57 for a high and 36 for low,” he said. “The temperatures for Monday and Tuesday are going to be above normal, even Wednesday and Thursday will be a little bit above normal.”

By the weekend, however, temperatures will trend lower and closer to averages, he said.

The Russell Inn was the place to be in early Williamsport.

James Russell was an …

I WENT TO PARIS FASHION WEEK

JJ Abrams and Daisy Ridley On Why There Are No Midichlorians In The Star...