Once upon a time, in the West…

Red Dead Redemption 2 was officially announced last October, finally delivering on the long-awaited return to Rockstar’s open-world version of the Great American West. But the full story of Red Dead Redemption 2, from speculations and leaks to the grand reveal, started to take shape years ago.

With the much-anticipated next chapter in the Red Dead saga shining just over the painted horizon, we decided to round up every scrap of news, rumors, and footage we’ve published to date for a clearer picture of Red Dead Redemption 2 up until now.

It always seemed likely that Red Dead Redemption was due for a sequel, reinforced by IGN’s glowing 9.7 Red Dead Redemption review back in 2010, though has the years came and went without mention no one was sure what Rockstar and publisher Take-Two had planned for the open-world Western.

It seems quite obvious that Red Dead is a permanent franchise.

Fast forward to May 2014, four years after Red Dead Redemption’s release, when Take-Two CEO Strauss Zelnick revealed the company still had plans for the Red Dead franchise. “As long as we keep delivering this incredible quality, Zelnick said, “it seems quite obvious that Red Dead is a permanent franchise.”

Almost two years later in April 2016, the first shreds of evidence that the long-rumored followup to Red Dead Redemption actually exists appeared in the form of the alleged game map, which was leaked online and later confirmed by an independent source that it was indeed real and a “very recent” model of the game’s art direction.

Additionally, the source claimed the game would be a prequel to the events of Red Dead Redemption, and the new game would take place to the east of previously playable areas, as evident by the Great Plains area and Blackwater City resting on the western side of the leaked map.

More interesting is the inclusion of the city New Bordeaux in the bottom right of the map, the fictionalized version of New Orleans that serves as the setting of Mafia 3, which could indicate that the Red Dead and Mafia franchises might share a universe as both franchises are published under the Take-Two umbrella.

A few short weeks following the leaked map, Take-Two revealed an announcement was coming concerning the future of Rockstar’s franchises. The company stated, “Rockstar Games was hard at work on some exciting future projects that will be revealed soon.”

The relatively “soon” reveal was teased five months later, when in October 2016 Rockstar Games posted a wordless tweet containing an image of the company’s iconic “R” logo set against a completely red backdrop.

In the days that followed, Rockstar was at it again, tweeting unaccompanied images that all but confirmed the next chapter in the Red Dead universe: 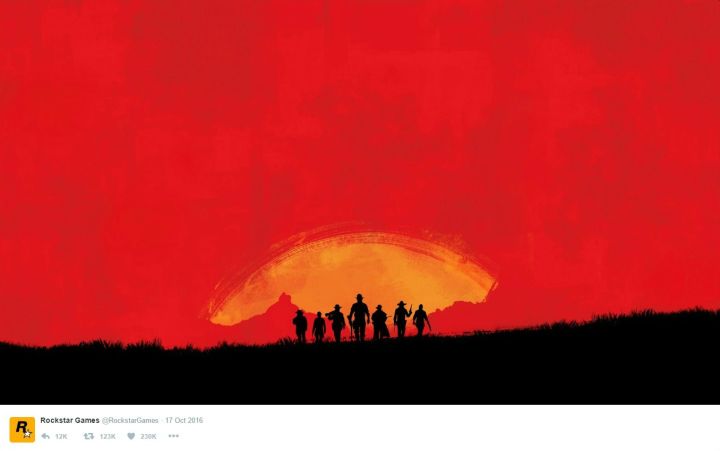 At this point Rockstar was ready to reveal what it had been working on, turning the flow information from the years-long drip feed of speculation into a fire hose of actual facts and announcements.

The very next day, publisher Take-Two registered the domain name RedDeadOnline.com (which at the time redirected to the Rockstar Newswire but now redirects to an Amazon pre-order for Red Dead Redemption 2 .) Following the incredible success of GTA Online, many saw the move to create a similar online platform to Rockstar’s other franchises as a sure thing.

According to Rockstar, Red Dead Redemption 2 will be, “an epic tale of life in America’s unforgiving heartland, the game’s vast and atmospheric world will also provide the foundation for a brand new online multiplayer experience.” The reference to a new online multiplayer experience seemingly circles back to Take-Two domain registration, all but confirming the existence of Red Dead Online.

Days after the official reveal, Rockstar finally showed off what everyone had been wanting for the better part of a decade, the Red Dead Redemption 2 World Premiere Trailer.

Though the trailer is relatively short, there’s a lot of information to be gleaned from the roughly one minute of footage. To flesh it out, IGN Live presented the trailer and poured over it with the community to reveal the Red Dead Redemption 2 secrets and details you might have missed. We also took the time to dig into the most important character in Red Dead Redemption 2.

In a move that wasn’t complete unexpected, Rockstar announced Red Dead Redemption 2 has been delayed, targeting a release on the PS4 and Xbox One in the spring of 2018. Though Rockstar did provide a few new screenshots to hold us over, which can be seen below.

“We are very sorry for any disappointment this delay causes, but we are firm believers in delivering a game only when it is ready. We are really excited to bring you more details about the game this summer,” the Rockstar blog post reads.

While not exactly Red Dead-related, in September 2017, Rockstar announced that a port of L.A. Noire will be coming to all modern consoles, including Nintendo Switch. This opens the door for the possibility of a Red Dead Redemption port on Nintendo’s new hardware.

On the very last day of summer (buzzer beater), Rockstar announced that it will release something related to Red Dead Redemption 2 on September 28. Sure enough, at 8am PT on that day, Rockstar dropped the second story trailer, which confirmed some major details about the sequel.

The game’s story, which will be a prequel, and star a new character, Arthur Morgan – not John Marston. Rockstar describes the game as “the story of outlaw Arthur Morgan and the Van der Linde gang as they rob, fight and steal their way across the vast and rugged heart of America in order to survive.” The Van der Linde gang is also known as Dutch’s Gang, which the last game’s protagonist, John Marston would eventually join (and leave).

For much more, check out our full breakdown of every detail and theory you might’ve missed in the trailer.

Red Dead Redemption 2 went a bit radio silent after the second trailer until February 1, 2018, when Rockstar came out and announced that the game had been delayed until October 26, 2018.

In a statement on Rockstar Newswire, a representative wrote:

“We are excited to announce that Red Dead Redemption 2 will be released on October 26th 2018. We apologize to everyone disappointed by this delay. While we had hoped to have the game out sooner, we require a little extra time for polish.

We sincerely thank you for your patience and hope that when you get to play the game, you will agree the wait will have been worth it. In the meantime, please check out these screenshots from the game. We look forward to sharing a lot more information with you in the coming weeks.”

Rockstar released several new screenshots along with announcement – see them all below.

On April 30, Rockstar announced that the third Red Dead Redemption 2 trailer would drop at 8am PT on Wednesday, May 2. Join IGN live on Wednesday, May 2 at 7:45am PT / 10:45am ET / 3:45pm UK (or 12:45am AEST on May 3) as we dive into whatever Rockstar has to show regarding Red Dead Redemption 2. You can watch it here, or on our Twitch, or YouTube channel.

For much, much more, keep it right here on IGN so you catch all the news as it comes in.

Dad, 23, is jailed for life for murdering his four-month-old son

Sterling sinks below $1.30 on Bank of England rate cut hints