The movie hits theaters in April 2019.

Earlier today, Robert Downey Jr. revealed the voice cast of his upcoming movie, The Voyage of Doctor Dolittle, on Twitter. “I am most pleased to announce the stellar voice cast joining me on #TheVoyageofDoctorDolittle,” Downey Jr. tweeted with a photo, shown below: 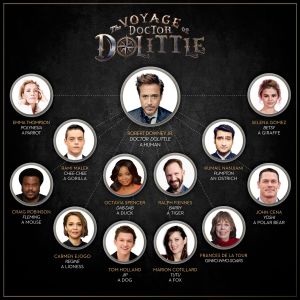 Downey Jr. tweeted this photo when announcing the voice cast of his new movie.

The tweet confirmed earlier reports that Holland, Fiennes, and Thompson were joining the cast.

Downey Jr. will star as the human physician who can communicate with animals. Joining Downey Jr. in the live-action roles are Antonio Banderas and Michael Sheen.

Michael Domanico is a freelance writer who appreciated Marion Cotillard in The Dark Knight Rises. Follow him on Twitter.

Get ready, Monsters — Lady Gaga’s #Chromatica is dropping at the end of the mont…

MIST paints your walls so you don’t have to – TechCrunch

What’s your standout scene from The Princess Bride? …

T-Mobile CEO teases that its next ‘un-carrier’ event is coming this...