Labour hit the panic button today as a poll suggested Boris Johnson is on track to secure a majority of 68 in the general election.

Jeremy Corbyn was left desperately scrambling to change tactics after a huge YouGov analysis revealed Northern voters have been abandoning him in droves.

The study suggested the Tories could smash Labour’s ‘red wall’ of traditional stronghold to win 359 seats out of 650 – up from 317 in the 2017 election and a comfortable 68 majority.

Mr Corbyn was found to secure just 211 seats, down from 262 two years ago – and only just above the historic disaster of 209 when the party was led by his left-wing hero Michael Foot.

Labour insiders admitted they had underestimated the willingness of Leave voters to switch to the Conservatives, and Mr Corbyn’s muddled stance – pledging to negotiate a new deal with the EU but then stay ‘neutral’ on it in a second referendum – was a real problem.

But Tories are also alarmed that the scale of the victory implied by the poll could be counterproductive with a fornight still to go in the campaign – with fears wavering voters either will not turn out or back Labour assuming they cannot win.

Mr Johnson’s Brexit mastermind Dominic Cummings warned that the contest on December 12 was might ‘tighter’ than it looks.

A separate – much smaller – survey for ComRes found the Conservative advantage had narrowed to seven points.

The YouGov research is closely watched because it accurately predicted in 2017 that former Prime Minister Theresa May would lose her majority – the only one to do so. 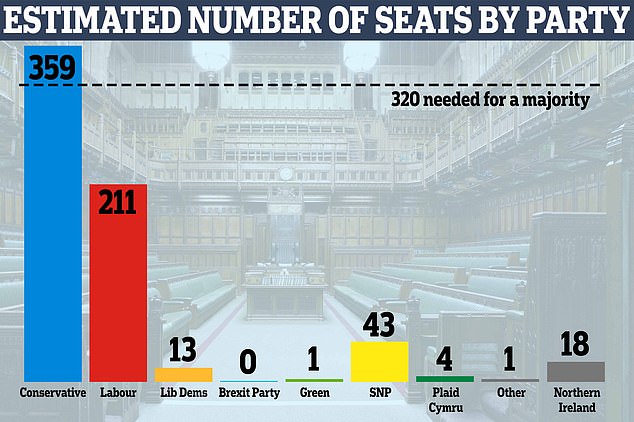 The YouGov ‘MRP’ analysis released this evening showed Mr Johnson’s Conservative Party could win 359 seats out of 650, up from 317 in the 2017 general election 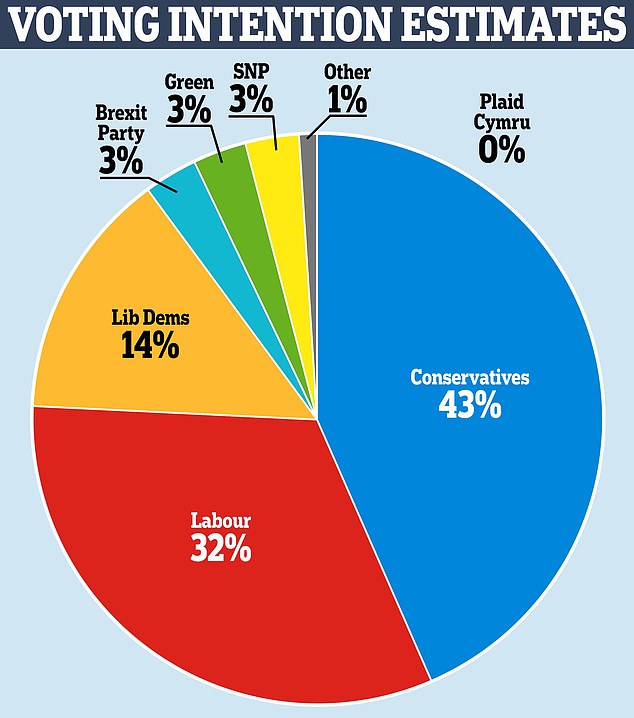 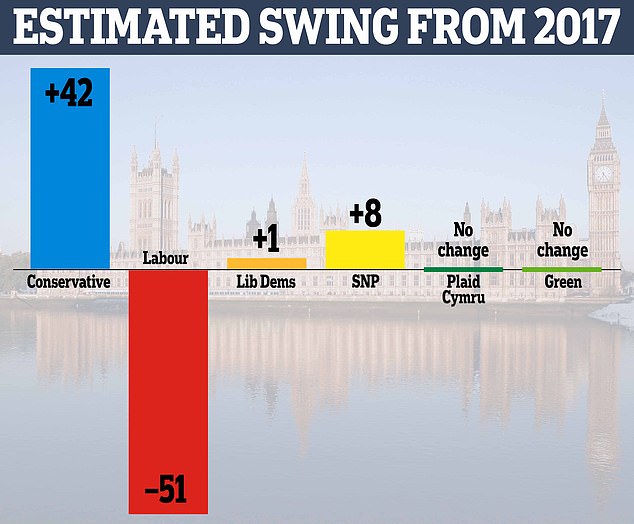 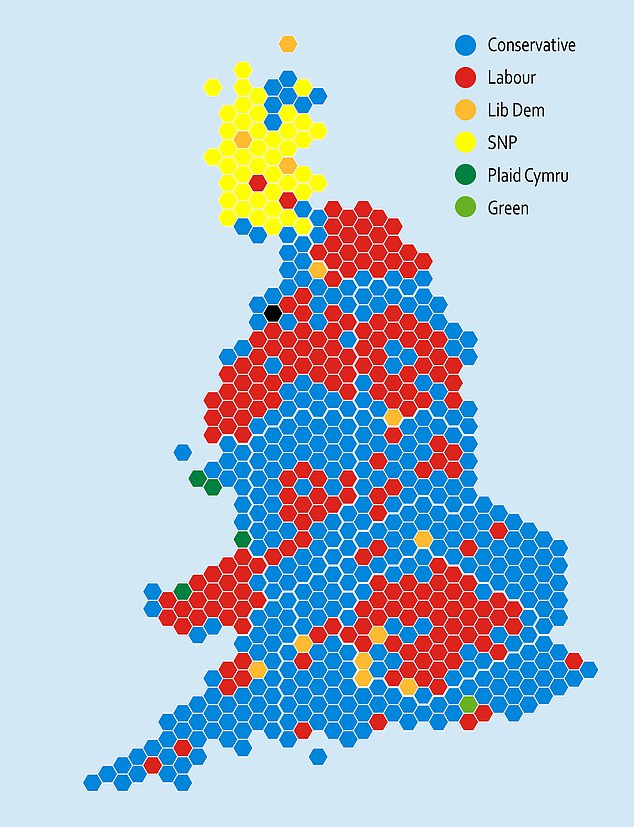 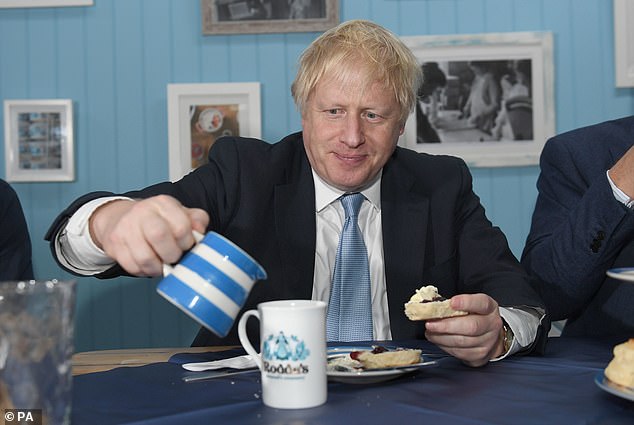 The YouGov ‘MRP’ analysis released yesterday evening showed Mr Johnson’s Conservative Party could win 359 seats out of 650, up from 317 in the 2017 general election

The Liberal Democrats on 13 seats, are only up one from the last election, despite a predicted increase in vote share from 8 per cent in 2017 to 14 per cent.

In Scotland, the SNP are set to get 43 seats, an increase of 8, but vitally for Mr Johnson only two come from his party.

If the election was held on Thursday, Wales’ Plaid Cymru and the Green Party would remain static with four seats and one seat respectively.

The modelling shows Mr Johnson would comfortably keep hold of his Uxbridge and South Ruislip seat, but that Zac Goldsmith could be on course to lose Richmond Park.

The analysis shows that most of the seats changing are ones that Labour won in 2017 – but could now be taken by the Tories.

If the election was held on Thursday, the Conservative’s would pick up Tom Watson’s vacated seat and Caroline Flint’s Don Valley seat.

Of the 76 Labour-held seats where they lead the Tories by fewer than 8,000 votes, Jeremy Corbyn’s party is currently behind in 43 of them, according to the analysis.

Those standing as independents such as Anna Soubry, David Gauke, Gavin Shuker, Frank Field and Dominic Grieve, are also set to lose out.

The Liberal Democrats are set to pick up a significantly higher vote share – from 8 per cent in 2017 to 14 per cent – but will only pick up one extra seat. 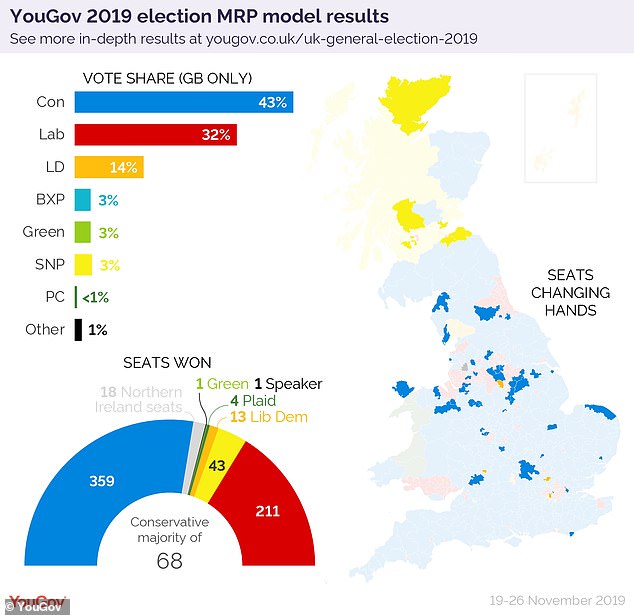 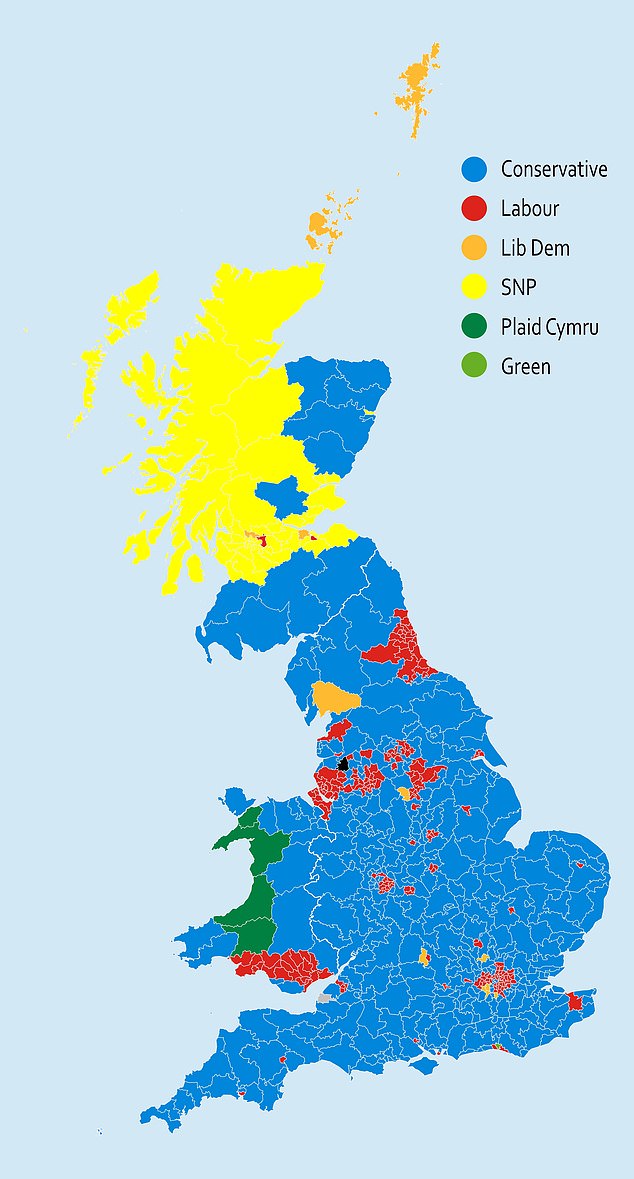 If the election was held on Thursday, the Tories would return to parliament with a significant majority according to YouGov analysis 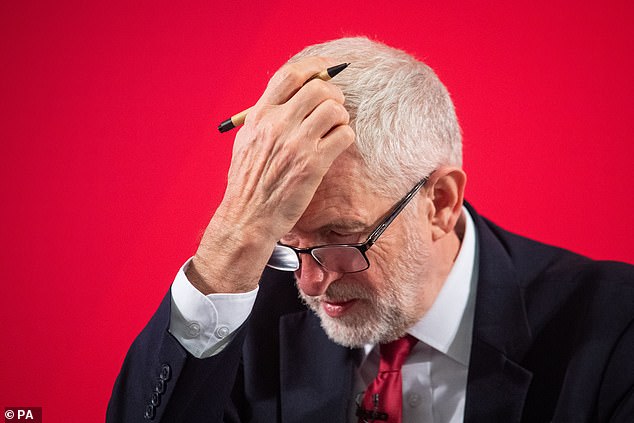 The model currently shows none of the MPs who have defected to the Lib Dems in recent months winning the seats in which they are standing.

Among the defectors from the Conservatives, Sarah Wollaston is 19 points behind in Totnes, Antoinette Sandbach is trailing by 33 points in Eddisbury, Philip Lee is down by 10 points in Wokingham, and Sam Gyimah is 8 points adrift in Kensington.

The three Labour defectors are also struggling. Chuka Umunna is 13 points behind in Cities of London and Westminster, Luciana Berger is 18 points back in Finchley and Golders Green, and Angela Smith is trailing by 33 points in Altrincham and Sale West. 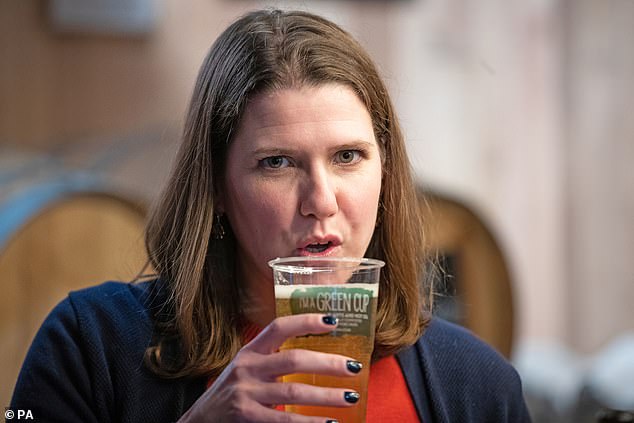 The Liberal Democrats on 13 seats, are only up one from the last election, despite a predicted increase in vote share from 8 per cent in 2017 to 14 per cent

However it is worth noting that there could be local elements in play in these seats, which the model might not be picking up.

The margins of error in the model put the Conservatives seat projection between 328 and 385, YouGov said, adding that there was still more than sufficient time for people to change their minds before Dec. 12 – the first Christmas election in nearly a century.

Chris Curtis, political research manager for the pollster, said: ‘YouGov’s official election MRP model currently shows the Tories with a comfortable majority with almost all of those coming at the expense of Labour in the North and Midlands.

‘As expected, the key thing deciding the extent to which each of these seats is moving against Labour are how that seat voted in the European Union referendum.

‘In the seats that voted most strongly to Leave in 2016 (60 per cent or more in favour of departing the EU), the swing to the Conservatives is over 6 per cent.

‘This is allowing the Tories to overturn quite substantial majorities in places like West Bromwich East, the seat held until recently by Tom Watson, and Don Valley, the seat currently held by Caroline Flint.

‘The only silver lining for Labour is that there are still 30 seats where it is currently 5% or less behind the Tories. If it can manage to squeeze the gap over the coming fortnight it may be able to paste over the cracks in their so-called Red Wall.

‘But with just two weeks to go, time is running out for Labour.’

Actor Rob Garrison, known for his roles in Karate Kid and Cobra Kai, has...

Can You Swim in Shade Balls?