Hash and Tag Media
Home Gaming The Adventures of Superpup: The Weirdest Superman TV Series Ever

It’s a bird! It’s a plane! No, it’s a failed pilot for a 1950s live-action series about Superman in a creepy dog costume!

Superman celebrates his 80th anniversary this week, and while it’s obviously the perfect opportunity to relive the important events in this beloved pop culture icon’s life, it’s also the perfect time to remember that one time when he was a nightmare dog who worked for the Daily Bugle in a live-action television series called The Adventures of Superpup.

Let’s back up. The year was 1958, and after six years, The Adventures of Superman was still a lucrative television series. George Reeves starred as the title character, a handsome and moral hero who fought mad scientists and mole people on a regular basis, and who was impervious to bullets but always seemed to duck out of the way when bad guys threw their guns at him out of frustration. 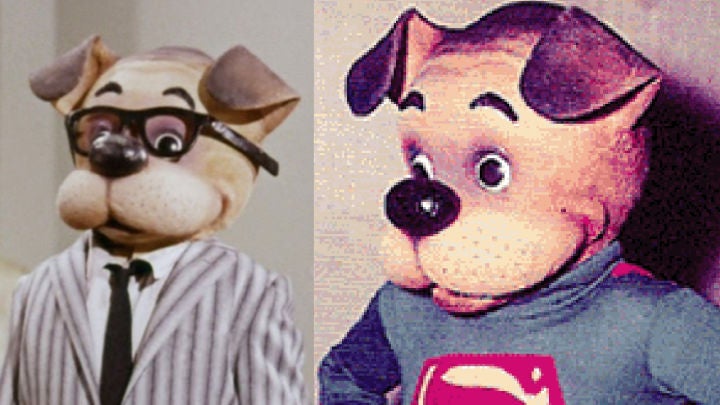 Of course, even in the 1950s, successful TV shows were a franchising bonanza. So, only one year after Superman met Lucy Ricardo, producer Whitney Ellsworth came up with an idea that would… fail miserably, and for obvious reasons.

The Adventures of Superpup takes place in a world of anthropomorphic animals, in which a mild-mannered reporter named “Bark Bent” (Billy Curtis) moonlights as a spandex-clad superhero. Along with his fellow reporter Pamela Poodle (Ruth Delfino) and their editor Terry Bite (Angelo Rossitto), he foils the sinister plans of the mad scientist Professor Sheepdip (Harry Monty). And he would probably do so every single week, brought to you by whatever product was popular at the time, if the show had gone to series.

The problem was, while The Adventures of Superpup might not be a particularly bad idea for an animated series, it wasn’t at all conducive to a live-action show on a limited budget. The show saved money by reusing the sets from The Adventures of Superman, but the little people actors were still forced to wear cheap mascot heads with limited (if any) articulation, and to say that the overall effect is off-putting would be very, very kind.

At best, it’s innocently surreal. At worst, it’s eerily hallucinogenic. Of course, given how inexpensive the pilot episode for The Adventures of Superpup was, it’s quite likely that – if the series had been picked up – the producers would have eventually spent more money on the costumes and made them somewhat less creepy. Then again, this kind of clunky, dead-eyed mascot costume is still occasionally used in children’s entertainment today, so there were absolutely no guarantees that the costumes would have improved enough to make a difference.

As a story, The Adventures of Superpup was a straightforward riff on the more successful Superman show. Bark Bent and Pamela Poodle work for The Daily Bugle (which sounds like a Spider-Man reference but it isn’t, since Spider-Man wouldn’t be created for another four years). Together they get called into the office of their editor, Terry Bite, to celebrate the successful capture of the villainous Professor Sheepdip, who will (of course) never get out of jail. Then we cut to the jail, where Professor Sheepdip immediately escapes with the aid of his dopey sidekick Wolfingham (Sadie Delfino).

Afterwards, Sergeant Beagle (Frank Delfino) stops by the Daily Bugle to… apologize? Does he work for the newspaper? It’s all very confusing, but anyway, after that, Professor Sheepdip tries to blow up the building by putting Wolfingham in a giant clock and delivering it to Terry Bite’s office. Superpup throws half of the editor’s belongings out of the window before he realizes the clock is the bomb, so he flies it away, and drops it on Professor Sheepdip’s house.

Superpup saves the day, but Professor Sheepdip is still at large, so in the second half of the episode the mad genius kidnaps Pamela Poodle and straps her on a rocket to the moon. Superpup puts a stop to that as well, and the rocket blows up Professor Sheepdip and Wolfingham’s car instead. The show closes with a shameless voice-over pitch: “Be with us again next week, when YOUR PRODUCT, the best of its kind in the world, presents The Adventures of Superpup!”

Flattery got them nowhere, of course. The show didn’t attract interest and never officially aired on television, although it did wind up on some home video collections, and is now a special feature on the comprehensive Superman Motion Picture Anthology Blu-ray movie collection, released by Warner Bros. in 2011. The pilot was filmed in color, but approximately half the episode only exists in black-and-white today, so many recordings of the show flip back and forth throughout the episode.

Is it any good? Well, the humor is slapstick and, by today’s standards, not particularly funny, but it’s important to remember that The Adventures of Superpup was being produced for very young children. It is, if nothing else, a fast-paced piece of absurdist entertainment. If only the heads of the costumes were a little more adorable, and a little less like something you’d expect to find in the deleted scenes of a David Lynch movie, it would have been a completely affable, albeit forgettable, footnote in Superman’s history.

It has been suggested, over the years, that The Adventures of Superpup was produced as a response to the tragic and mysterious death of Superman star George Reeves, but there seems to be little truth to that urban legend. Reeves died in June 16, 1959 and the copyright information on the Adventures of Superpup title card clearly reads 1958 (in roman numerals). So it would appear that this show was merely a failed, ill-advised spinoff, as opposed to some desperate last-minute attempt to keep the franchise afloat.

Although it wasn’t a success, a show like The Adventures of Superpup does, in a roundabout way, prove just how successful Superman truly is. While we celebrate the many successful and unforgettable comic books, movies and television shows that have been made about the character, the fact that Superman can also transform into something as strange The Adventures of Superpup and then back again, as successful ever, is a testament to the hero’s versatility.

In solidarity with #NationalWalkoutDay, Viacom channels (including MTV, BET, Nic…

The Flash: “Therefore She Is” Review