Updated with all the latest and best TV deals.

Manufacturers feel a need to release a new model each and every year, despite the fact that TV technology actually progresses relatively slowly. That’s not a bad thing. With every new model release, previous year models take a significant price cut. Even now, just one month into 2018, there are plenty of TV deals that match or beat the prices we saw on Black Friday. I’m here to lay out the best deals that are currently available, and I’ll keep this page updated throughout the year. 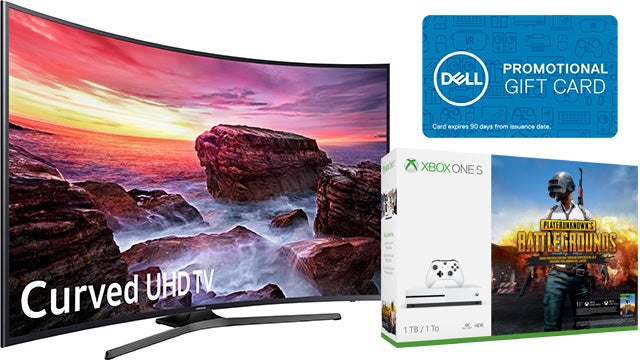 You can use your $200 Dell eGift Card on pretty much anything at Dell (except Dell gift cards). That includes Xbox Live Gold subscriptions, Xbox gift cards, Xbox games, controllers and more.

Dell’s TV sale is consistently one of the best places to find deals on 4K TVs. The deals are updated every Monday morning so if there isn’t a TV you’re interested in, just check back again. Most of the discounts are in the form of a Dell eGift Card, which can be used on anything at Dell (except other Dell gift cards). That includes gaming consoles, video games and accessories, gaming laptops and monitors, and much more.

This Vizio reference TV came in at $6000 when it was released in 2016. It supports true HDR thanks to its wide color gamut, 384-zone full-array local dimming, and 800nits peak brightness. A 5.1ch surround sound audio system is included with the TV, and the included Dell eGift Card is big enough to fully pay for an Xbox One X gaming console.

The 65SJ8500 HDTV has all the requisites of true HDR output, including wide color gamut, local dimming, and sufficient peak HDR brightness.

The highly rated X900E is a true HDR capable TV set and comparable to the highest end models from LG and Samsung at a lower price point.

This TV is stacked in every possible way except for price. It’s 4K, HDR ready, has Roku cooked right in, it’s 55-inches, and it has solid reviews.

This refurbished TV comes with a 90-day Vizio warranty. Vizio’s 2017 M-series TVs have all the requisites (wide color gamut, local dimming, and sufficient peak brightness) to fully support HDR capability. They are some of the least expensive HDR capable TVs you can find and have among the best image quality in the price range.

If you’re willing to spend a little more compared to the aforementioned C7P series, you’re getting the 2017 E7P model with the OLED film bonded to a sheet of glass. This makes for an exceptionally thin, gorgeous looking TV panel that looks better than pretty much every other TV out there (in my humble opinion). It also has a built-in soundbar that offers much better audio than your traditional TV speakers.

For TVs, size matters. With an increase an size comes an increase in price, except in this case. Sceptre strips down all the features you don’t need – like Smart functionality – and gives you a solid 75″ 4K TV for just under a grand.

The XBR X930E is the highest end model in Sony’s “X” series. For the price premium over the X900E, you get better black levels, higher peak brightness, and better upscaling thanks to a faster processor.

Best Buy’s TV deal page updates every week, on Sunday. Although most of their TVs are non-deals (regular price), some of the TVs on sale can be some of the lowest across the net. Bookmark when you’re TV hunting.

Auctions from eBay’s Daily Deal page work differently from your typical eBay auction. All of these deals are “Buy It Now” only and vendors have been screened and vetted by eBay. Most have tens if not hundreds of thousands of reviews with 98%+ feedback. Some of the TV deals here are the best you’ll find, ever. Just make sure you read the fine print.

Call of Duty: Warzone Season 3 Adds Quads, Dog And A New Operator From The Campaign

4 ways Android P’s gesture navigation is better than the iPhone X’s (and 4...

California man ‘strangled a woman to death with an iPhone cord’

Tomb Raider: 7 Biggest Differences Between the Games and New Movie