Whether you’re in the mood for a classy thriller or an ultraviolent gorefest, or anything in between, there’s something for you.

Netflix is nothing if not a double-edged sword. They have an awful lot of content, but an awful lot of it is awful. Many of the most popular movies ever made aren’t available, or cycle in and out with little warning, so if you’re looking for a great movie you might have a hard time finding it.

Fortunately, if you know what you’re looking at, there are still plenty of great films to find on Netflix, especially in the horror genre. It’s as wild and as varied as a genre gets, and whatever the brand of horror you’re in the mood for, there’s something on there for you. Let’s take a look at the best horror movies currently on Netflix streaming, for horror fans of all kinds! (And head over here to find out what’s new to Netflix this month.)

Update: This article has been amended to remove films no longer on Netflix, and to include new horror classics that have recently been added to the service.

Please note: This list pertains to U.S. Netflix subscribers. Some titles may not currently be available on international platforms. 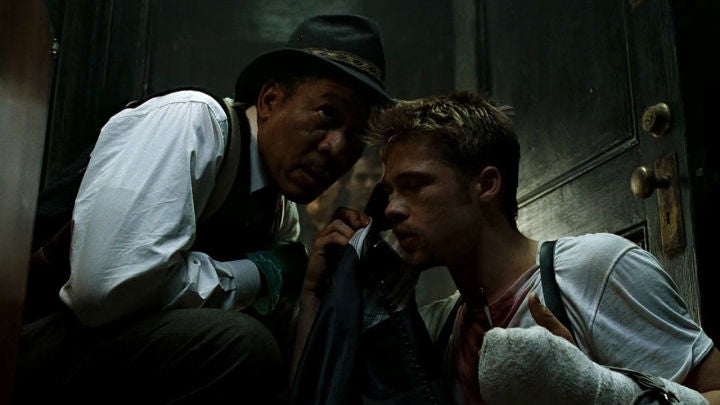 David Fincher’s grotesque and disturbing thriller Se7en stars Morgan Freeman and Brad Pitt as detectives on the hunt for a serial killer, whose victims are all guilty of “The Seven Deadly Sins.” He’s obviously a monster, but Fincher portrays the whole world as a monstrous cesspool in which good cannot thrive, creating an uncomfortable backdrop, against which unspeakable acts of violence almost make perfect sense. A cynical horror/thriller, but a brilliant one.

The Lost Boys may be one of the most 1980s movies of the 1980s, with Corey Feldman and Corey Haim teaming up to kill vampires who look like they stepped out of an early era MTV music video. But it’s still enormously entertaining. Jason Patric stars as the older brother who falls in with the wrong crowd, a gang of leather-clad vampires led by a young Kiefer Sutherland, and only his kid brother and a couple of comic book shop nerds know how to save him. The characters are relatable, the gore is memorable, and that soundtrack is a killer.

A bumbling cop investigates a series of mysterious deaths in his small town, and discovers that the real horror may be closer to home than he realizes. The Wailing sprints from genuine dread to broad horror comedy and back again, keeping you on your toes the whole time. You’ll never know where exactly this movie is going, but you’ll be glad it went there.

Vera Farmiga and Patrick Wilson play supernatural investigators who take on a job protecting a large family from a malevolent presence. James Wan directs the hell out of The Conjuring, crafting memorable characters and scary set pieces that will make you jump right out of your seat, shrieking like nobody’s business. It’s as frightening as it is classy.

A single mother and her emotionally troubled young son fall prey to a storybook monster called The Babadook, which might be a terrifying otherworldly creature or might simply be the way they both interpret serious and dangerous mental illness. However you interpret The Babadook, Jennifer Kent infuses her film with incredible amounts of atmosphere and dread.

A college student and lifelong vegan is forced to eat raw meat as part of a hazing ritual, and soon she realizes that she wants more meat. A lot more. Raw is one of the most disturbing and, at times, grotesque horror movies in recent years, with an unsettling look at addiction and primal desires in their most destructive forms.

Carla Gugino travels to an isolated cabin with her husband to spice up their marriage, but he dies while she’s handcuffed to the bed, and now she’s trapped, starving, and staring down a feral dog that’s found its way into the house. Mike Flanagan’s impeccably constructed adaptation of the Stephen King novel is a suspenseful film, but also a bravura showcase for Gugino’s incredible acting talents.

Logan Marshall-Green is invited to his ex-wife’s house for a dinner party, but there’s something… off. He can’t quite put his finger on it but there are suspicious little details everywhere, and director Karyn Kusama skillfully keeps us on a knife edge the whole movie, wondering what the heck is really going on. The Invitation is a subtle horror thriller, but if you like a movie with a slow burn, and impressive psychological insight, it’s a must see.

CURSE OF CHUCKY and CULT OF CHUCKY

If you like old-fashioned slasher franchises, Netflix kinda sucks right now. Freddy and Jason and Michael are nowhere to be found, but you will find two of the later, more interesting sequels in the Child’s Play franchise. Curse of Chucky finds the killer doll living with a new family, in a spooky old-fashioned slasher with a lot of great moments, and Cult of Chucky takes the series in wild new directions, with unexpected twists and turns and hallucinogenic imagery.

Brash, boorish, and completely unapologetic, the remake of the cult classic Piranha is about a spring break gone wild, gone wrong. Super deadly piranha have just been released in the water and they’re about to eat everyone and everything, and it’s going to be gory as hell. Alexandre Aja’s Piranha probably won’t terrify you but it’ll play great at parties, that’s for sure.

A single Iranian mother is trapped in her apartment with her frustrating young child and, after a missile strikes her building, a demonic djinn which starts manipulating them. Babak Anvari’s eerie and emotionally charged horror movie takes on a greater significance when placed against the political backdrop of Iran in the 1980s, but whether you’re picking up on all the subtext or only watching Under the Shadow as a straight-up supernatural thriller, you’re going to be impressed.

The zombie apocalypse has been unleashed in South Korea, and a group of total strangers are stuck on a speeding train when the outbreak starts. Sang-ho Yeon’s breathless horror-thriller figures out every possible way to make “zombies on a train” seem new and exciting, and builds a whole cast of characters you won’t want to watch get eaten, even though you know most of them will. Train to Busan is one of the most pulse-pounding zombie movies ever.

A group of female spelunkers gets trapped in an underground cavern, and the only way out is to travel deeper into uncharted territory. Neil Marshall’s The Descent is scary enough in the first half, when the claustrophobia and helplessness are absolutely palpable, but when the monsters show up in the second half it kicks into high gear, and never stops.

It’s always following you, and you never know when it will catch up, and it’s going to kill you, and the only way to get rid of it is to give it to somebody else… by having sex with them. It Follows has a strange and kind of brilliant premise, and as directed by David Robert Mitchell it becomes a spine-chilling metaphor for every sexual anxiety anyone has ever had. It’s also incredibly suspenseful, with widescreen photography that makes you constantly search the backdrop, wondering who is following whom, and when they’re going to strike.

Eli Craig’s brilliant horror comedy takes the Texas Chain Saw Massacre genre and flips it upside down. Alan Tudyk and Tyler Labine star as two lovable southerners who just bought a vacation home in the woods, but when they’re discovered by a gang of visiting urbanites, they’re mistaken for killers and have to defend themselves against the violent city dwellers. Impeccable comic timing and some really gruesome gags make a great idea for a movie into a truly great example of 21st century splatstick.

Most of the Hellraiser movies are genuinely quite bad, but Netflix has the two good ones. In Clive Barker’s original Hellraiser, an unhappy housewife seduces strangers and brings them back to her attic, where her undead skeletonized boyfriend can strip the skin off of them. It’s one of the best gore films ever, and the sequel, Hellbound: Hellraiser II, is even better, dipping into the rich supernatural mythology of the series and sending its characters into one of the most vividly realized versions of hell in movie history.

A blind Vietnam veteran moves into a retirement community on the edge of the woods, but every full moon one of his neighbors is mysteriously killed. Adrián García Bogliano’s smart werewolf thriller understands that werewolves are scary but also tragic creatures, and setting Late Phases during the twilight years of its characters only gives his film added weight. And the climactic showdown is a thrill.

A group of friends are backpacking through the woods, but after spending the night in an abandoned cabin with a bizarre religious icon inside, they start to experience inexplicable phenomena. There are some familiar elements in David Bruckner’s The Ritual, but the film’s got a great cast and eventually leads to unusual, horrifying conclusions.

JOHN DIES AT THE END

Don Coscarelli’s trippy adaptation of David Wong’s hit novel tells the story of young monster hunters who unlock the secrets of multiple realities after taking some seriously messed up drugs. It starts out weird and only gets weirder and weirder. Don’t bother trying to make sense of John Dies at the End and just try to enjoy the superlative high of watching a master surrealist like Coscarelli tell a rousing supernatural adventure story in his own, inimitable fashion.

Karen Gillan and Brenton Thwaites play siblings whose childhoods were torn asunder after their parents acquired a haunted mirror, and now, years later, they’ve reunited to destroy the antique. It may sound like a silly idea, but in the hands of director Mike Flanagan it’s an inventive supernatural tragedy, equal parts exciting and sorrowful.

Joel Edgerton wrote, directed and stars in this genuinely disturbing thriller about a less-than-happily married couple whose lives turn upside down when they run into an old friend who wants to be very, very chummy. The Gift keeps twisting around on itself, revealing that the people we sympathized with might actually be monsters, and vice-versa, and then vice-versa all over again, and it only gets more and more shocking as it goes on.

How Stanley Kubrick Made the Matrix Sequels ‘Torture’ to Shoot, According to Their Cinematographer

House to vote on limiting Trump’s military powers regarding Iran

Human bodies have been getting COLDER since the 19th century