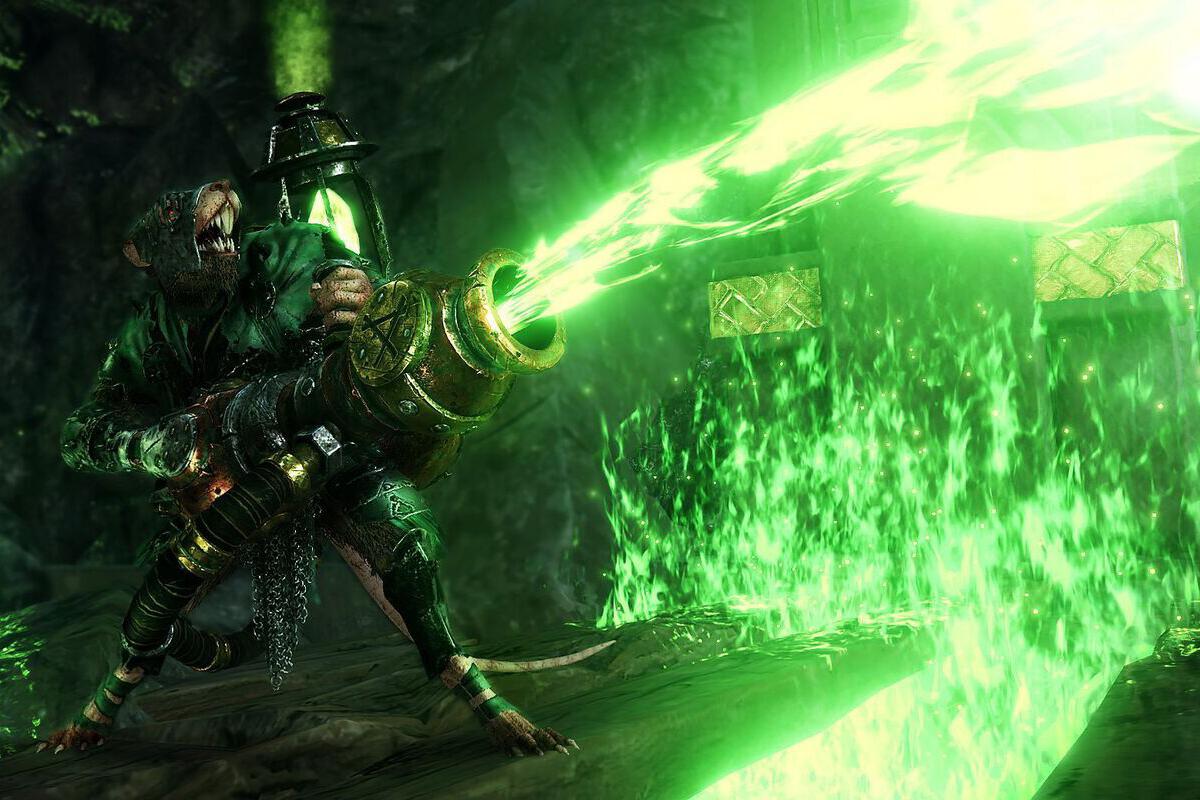 This year’s been a bit odd though, with many of the biggest and most anticipated games (Sea of Thieves) floundering, and others ending up on this list that I hadn’t even heard of until they popped up on Steam (Yoku’s Island Express). We’ll see how many of them survive for our final Game of the Year list in December, but for now? Read on for our 10 favorite PC games of 2018…so far.

I’m not much of  a fan of survival games normally, but Subnautica ($25 on Humble) had me hooked for weeks. The mysteries of its alien oceans held so much promise, and I fell right into the familiar loop—crafting gear to go deeper to find new loot to craft even better gear, and so on, sinking ever further into the depths and encountering weirder and weirder creatures.

It’s a marvelous example of world-building, blended with a story that casually guides you to interesting hand-crafted moments without undercutting the strengths of its sandbox. Just enough direction to keep you moving forward. Or downward, as the case may be.

A Case of Distrust

I’m a sucker for a good detective game, and A Case of Distrust ($15 on Steam) is a great one. Set in San Francisco in the 1920s, you play as Phyllis Cadence Malone, a private investigator on the trail of a murder. The game is almost entirely based around conversations, as you interrogate various members of the community and try to catch them in lies.

But it’s the art that really earns A Case of Distrust a spot on this list. Every frame is this eye-catching monochromatic minimalism, more suggestions of scenes than anything else. It’s absolutely stunning, and an excellent pair to the writing itself.

When I first saw Kingdom Come: Deliverance ($60 on Humble), I thought it might be a disaster. It was just so damn ambitious, an Elder Scrolls-style RPG set in medieval Bohemia with semi-realistic melee combat, potion brewing, horseback riding, and about a dozen other systems on top. Oh, and it was being made in CryEngine, which is hardly what I’d picture for an Elder Scrolls-style RPG.

And yet somehow it works. Kingdom Come: Deliverance is janky as all hell, bug-ridden, clumsy, and often poorly voice-acted. Despite all that, it’s also one of the most—and I don’t use this word often—immersive RPGs I’ve played in a long, long while. By the end, I felt surprisingly invested in my character Henry, the blacksmith’s-kid-turned-knight who helped save a realm. Proof history can be just as compelling as fantasy, given the developers put enough love and care into the details.

BattleTech ($40 on Humble) is flawed. Everything about it is just a hair too slow, its interface is convoluted, and its story not as deep as I’d like from the developers who made the excellent Shadowrun games.

But the core of the game is worth overlooking those flaws. BattleTech is one of the most satisfying tactical games in years, as you launch entire grips of missiles onto an enemy’s head and then close in to punch one enormous mech fist into their stupid mech head. There’s also a lot of fun to be had with the unique managerial layer, which tasks you with evaluating risk on freelance mercenary contracts—balancing the promised rewards with the potential for pilot death or, worse, the loss of an entire mech.

With more performance fixes on the way, it’s a game that’ll only get better as the year goes on.

Where BattleTech is all about spectacle, Into the Breach ($15 on Humble) is the polar opposite type of tactics game. It’s unrelentingly small, its grand story of mechs versus giant bugs nevertheless played out on a eight-by-eight grid.

There’s a ton of depth to it though, and Into the Breach got me into that “one last round” mood more than any other game this year. Each map takes maybe 5 to 10 minutes to finish, and the fact you can see where enemies will move on their next turn makes each action feel more like a puzzle than a standard tactics game.

Minit ($10 on Humble) is clever as hell. On the surface it’s a top-down Zelda-style adventure. There’s a catch though: Each life lasts only, as you might infer, one minute. You keep any weapons or items you collect in that minute, but any conversations or enemies or obstacles? They reset. Thus every life requires planning and pinpoint precision, as you slowly but surely make your way through the world.

There have been other games in this vein, like Half-Minute Hero. It’s still a pretty novel conceit though, and I had a great time blasting through Minit’s puzzles, and an even better time enjoying its writing, which pokes fun at some longstanding Zelda tropes.

Ghost of a Tale

As a kid I remember reading the Redwall books and being fascinated by its miniature fantasy world, where mice wielded swords and fought off the rat menace. I bet the developers behind Ghost of a Tale loved those books too.

Not that the idea of a miniaturized mouse world is unique to Redwall, but Ghost of the Tale ($25 on Humble) feels like it could’ve been pulled straight from that universe. You play as Tilo, a mouse forced to sneak through an occupied castle, avoiding the rats who hunt you and trying to win allies along the way. It’s just a wonderful setting, and the stealth side of things is actually pretty damn robust too. One of the most charming games of 2018 for sure.

We’re living in a golden era for the so-called “Metroidvania” genre, what with Hollow Knight, Axiom Verge, Bloodstained: Curse of the Moon, SteamWorld Dig 2, and so on.

Yoku’s Island Express ($20 on Humble) is one of my favorites though, combining the well-worn genre with—of all things—pinball. Rather than hopping around like a normal platformer, you’ll use flippers to bounce yourself around every screen, solving puzzles and exploring the island of Mokumana on a quest to deliver the residents’ mail and, maybe, save everyone from destruction. It’s a fantastic genre mashup and one of 2018’s best surprises.

Warhammer: Vermintide II ($30 on Humble) is empty fluff, but it’s entertainingly empty fluff. Oh sure, there’s a story of some sort here, but even after playing every map dozens of times I still couldn’t tell you what it is. All I know is it’s Left 4 Dead, but with Warhammer characters using great big swords to chop rats and other nasties apart. Just hordes and hordes and hordes of enemies, all being massacred.

Rarely does a mindless game like Vermintide II make it onto a list of mine, and I don’t know if it’ll survive through December. But it’s immensely satisfying, and I had a great time getting together friends for a few weeks of small talk interspersed with frantic head-chopping action.

Celeste ($20 on Steam) is the tightest platformer I’ve played since Super Meat Boy. That’s the first point, and it’s important. Playing Celeste is a joy, mastering all of its intricate movement tricks and trying to scale the titular Celeste Mountain. And after the story’s over, there are the B- and C-Sides—“secret” levels, even more difficult than the originals, for those dedicated few who want a true challenge. It’s fiendish.

It’s Celeste’s story and attitude that ultimately put it at the top of this list though. Unlike Super Meat Boy and other platformers of that ilk, which often pit game against player, Celeste wants you to succeed. It’s constantly reaffirming that it believes in you, that you can definitely scale this mountain if you just keep trying, that there’s no shame in taking advantage of the accessibility options (like slowing down time or giving yourself an extra jump for the harder gaps).

And that attitude jibes with its story, in which Madeline battles against her depression. It’s a more poignant theme than I ever expected from one of these precision platformers, and months later I’m still thinking about some of its best moments. No small feat.

Mooncrash ($20 on Humble) is technically DLC, and thus ineligible for honors under our usual Game of the Year rules. Not a huge deal, because Prey ($30 on Humble) was on our best games of 2017 list, but it’s worth highlighting Mooncrash anyway. It’s perfect.

Basically, Mooncrash takes Prey’s systems and straps them onto a pseudo-roguelike. The environments are always the same, but weapons and ammo (and I think enemies too) are randomized each run. Thus you’re never quite sure whether you have the right tools for the job, and the result is some really clever problem-solving on the part of the player. It forces you out of the comfort zone that games like Prey often let you slip into.

Pair that with Mooncrash’s surprisingly good story, and it deserves a mention here. I wish Bethesda had made it a standalone expansion so more people could experience it without the up-front cost of buying Prey also—though hey, while we’re at it? Play Prey. It’s great.

Last but not least, another expansion. I wasn’t expecting much from Curse of the Pharaohs ($20 on Humble). I thought Assassin’s Creed: Origins ($60 on Humble) was fine, but it wasn’t my favorite in the series. Also, it was enormous. More? I thought that seemed unnecessary.

But Curse of the Pharaohs succeeds because it’s unlike anything Assassin’s Creed’s done before. The series is tied inextricably to its historical setting, but Curse of the Pharaohs leans into the Egyptian pantheon and more fantastical elements, sending Bayek into the afterlife to hunt down Tutankhamun, Nefertiti, and more. These areas blend history and myth and religion into wild dreamscapes, the likes of which Assassin’s Creed has never attempted. Giant scorpions, towering statues, fields of grain and eclipsed suns.

I only hope we see more like it with this year’s Assassin’s Creed: Odyssey. It’s a fascinating direction for the series.

Bethesda just pulled its games from Nvidia’s GeForce Now, and that sucks

How to install a smart switch

UPDATE: Klay Thompson is out for Game 3 of the #NBAFinals. …