No gods or kings, only woman.

Marvel’s “Death of the Mighty Thor” storyline reached its dramatic climax today. But did Jane Foster actually meet her end? 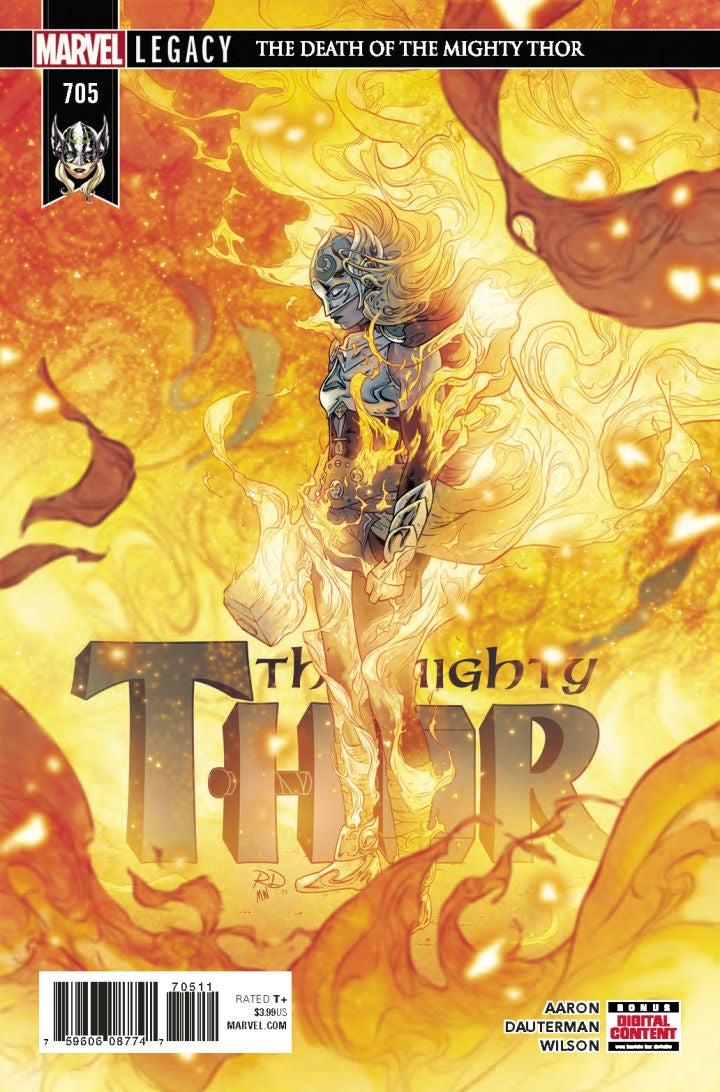 Warning: this article contains spoilers for The Mighty Thor #705!

It turns out that Jane did meet her end as she faced down the god-killing monster known as the Mangog. Jane was already at death’s door in recent issues, with no less an authority than Doctor Strange warning her that transforming into Thor one more time would cause her body to succumb to its terminal cancer. Unfortunately, with Mangog currently tearing its way through Asgardia, Jane had no choice but to summon Mjolnir and embark on her final mission.

Even the combined might of Thor, the Odinson and Odin wasn’t enough to overcome the wrath of Mangog. Instead, Jane ordered everyone to evacuate Asgardia. Then, she bound Mangog with the same unbreakable chain that once held the Fenris Wolf and tied that chain to Mjolnir. She then directed her hammer to fly directly into the Sun, destroying it and Mangog in the process.

With her godly body fading as her connection to Mjolnir severed, Jane had only time enough to kiss the Odinson one last time before reverting to her dying, human form. She perished even as Asgardia itself was consumed by the Sun.

If there were any doubt left as to Jane’s fate, this issue ended with Thor plummeting back to Earth and cradling her lifeless body.

Barring any last-minute acts of divine intervention, Jane Foster is dead, and her tenure as Thor has ended. This issue still leaves some major questions unanswered, however. How will the Odinson reclaim the mantle of Thor? Is Mjolnir truly destroyed, and does that explain why Thor is wielding a gold hammer in his upcoming new series? We expect some of these questions will be addressed in The Mighty Thor #706, which caps off the current series next month.

Let us know what you think of this story and if Jane was given the death she deserves in the comments below.

For ScopeAR, the market is finally catching up with the technology – TechCrunch