The goids mourn a fallen hero.

Jason Aaron and Russell Dauterman’s “Death of the Mighty Thor” storyline lived up to its name in The Mighty Thor #705, with Jane Foster making the ultimate sacrifice in order to save Asgardia from the Mangog. Now all that’s left is for the Odinson and his fellow gods to pick up the pieces and mourn a fallen hero. The result is a heartfelt, bittersweet series finale, though one that wraps Jane’s story on a conflicting note.

While Jane’s own arc as a frail human-turned-goddess of thunder has been the driving force of this series, The Mighty Thor has also explored how this upstart Thor has impacted the gods of Asgardia. With Jane dead, that latter element comes into focus here. Both Odin and his son face their own emotional roller coasters as they grapple with the knowledge that Jane did what no god was capable of. As ever, worthiness and the responsibilities of godhood weigh heavily on Aaron’s Thor run. This issue succeeds well in casting Odin as a more sympathetic figure, a welcome change from the blustering, antagonistic force he’s been throughout most of Aaron’s run. As for the Odinson, this issue succeeds in casting him as a man both embracing his inner hero and one tempered by recent tragedies.

In general, Aaron’s script strikes the proper balance between glum heartache and hopeful optimism. It closes the door on this particular era of the Thor franchise while opening another one in its place. And it mostly pays fitting tribute to a beloved character, but more on that a little later.

Part of the melancholy surrounding this issue stems from the fact that it’s the end of a very fruitful collaboration between Aaron and Dauterman. This series simply wouldn’t be what it is without Dauterman’s gorgeous line art and Matthew Wilson’s vibrant colors. They both help bring the series to a dynamic visual finish. They manage to convey both the raw, aching emotions felt by the surviving characters and the fury of a cosmic storm unleashed by Mjolnir’s destruction. They craft one of the most beautiful moments in the entire series when the gates of Valhalla open and readers catch a glimpse of the paradise that lies beyond.

Warning: the remainder of this review contains spoilers! 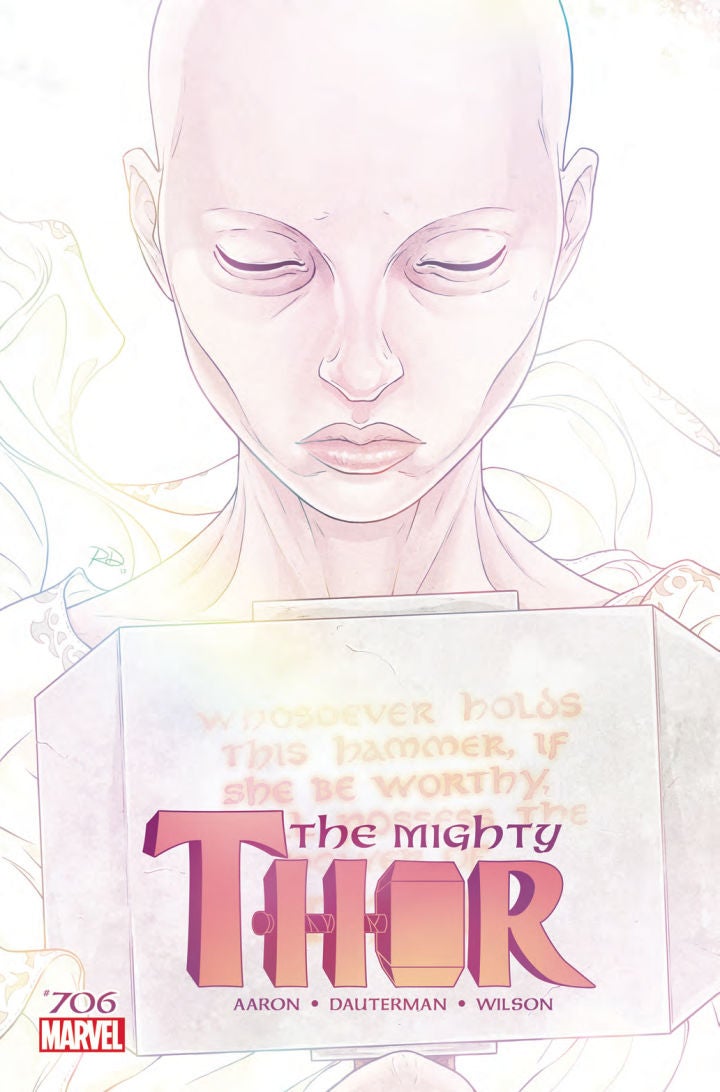 The one element of this issue that gives me pause is the decision to grant Jane a reprieve and a second chance at life. It’s not that the character doesn’t deserve a happy ending, given all she’s fought for and sacrificed. But what a character deserves and what results in the best story aren’t always the same thing.

Jane’s resurrection seems to rob this story of some of its weight, in the same way that Thor’s almost immediate return after Fear Itself lessened that story in hindsight. It’s so rare that any character’s story is ever allowed to end in superhero comics, and it’s tough to imagine Jane being given a better sendoff than what she received in issue #705. Not to mention that the knowledge that he can never live up to Jane’s example would be a fascinating wrinkle in the Odinson’s journey towards reclaiming his mantle. Aaron and Dauterman make a conscious choice to downplay the tragedy of this conflict and end the series on a happier note.

Aaron certainly deserves the benefit of the doubt at this point, and hopefully the next Thor series will justify this storytelling decision. But as it stands now, Jane’s happy ending just doesn’t sit entirely right, beautifully crafted though this issue is.

This finale issue captures so much of what has made The Mighty Thor Marvel’s best ongoing series. It’s emotionally rich, beautifully rendered and continues to explore the themes that have defined Aaron’s run for years. But as well-crafted as this comic is, the happy ending does seem to work against the grand sacrifice made by Jane Foster in issue #705.

Stocks began 2020 at record highs. Here’s what could go wrong