Three men who have spent 36 years in prison for a crime they did not commit have been exonerated and released from prison.

Alfred Chestnut, Ransom Watkins and Andrew Stewart were teenagers when they were wrongfully convicted of murdering teenager DeWitt Duckett in his Baltimore  school in 1983 for his Georgetown Starter jacket.

They were put behind bars after prosecutors focused on the fact that they had skipped their own classes at a different school and had been seen lurking in the hallways of the school where the murder took place.

Their case was re-investigated by the Conviction Integrity Unit within the Baltimore State’s Attorney office after Chestnut, 52, wrote a letter in May asking for help.

He said there was new evidence and witness testimony which proved it was a different man who shot Duckett. He is now dead. 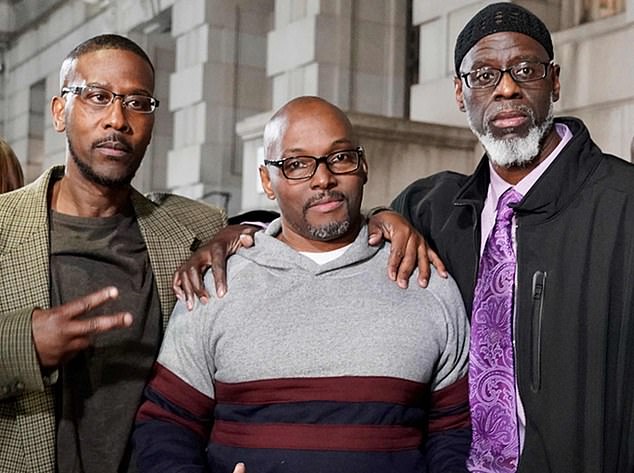 Alfred Chestnut, Ransom Watkins and Andrew Stewart (pictured together after they were finally exonerated) were teenagers when they were wrongfully convicted of murdering teenager DeWitt Duckett in his Baltimore school in 1983

The three wrongfully convicted men were exonerated on Monday and were released later that afternoon.

Chestnut’s mother, Sarah, told The Washington Post as she waited outside for him: ‘I didn’t think this would ever come…I haven’t danced in a long time. I might dance.’

‘On behalf of the criminal justice system, and I’m sure this means very little to you, I’m going to apologize. We’re adjourned.’

DeWitt Duckett was only 14 when he was shot dead in the corridor at Harlem Park Junior High School.

He was killed for the Georgetown jacket he was wearing and the case garnered national attention.

The police force came under intense scrutiny to solve it quickly.

But despite other students naming Michael Willis, then 18, as the shooter, police and prosecutors focused on the three innocent teenagers.

Willis had been heard taking credit for the shooting and was even seen wearing Duckett’s Georgetown jacket that night.

However the three others were the ones arrested. 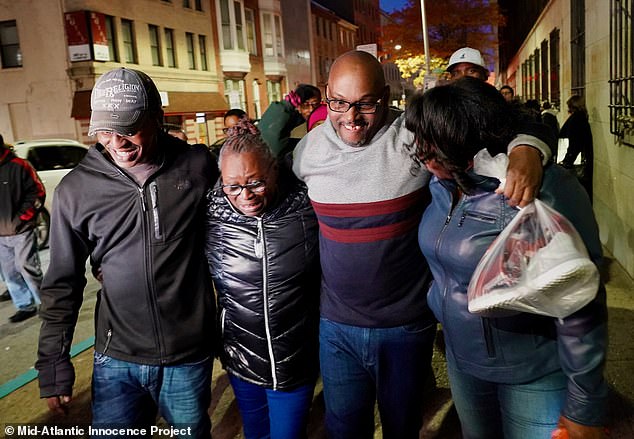 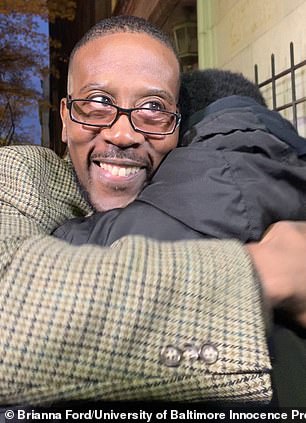 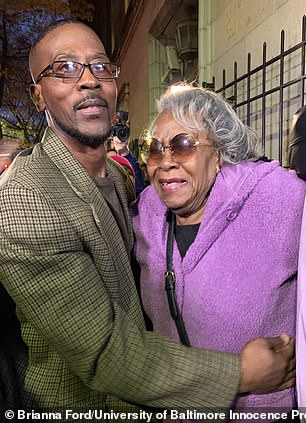 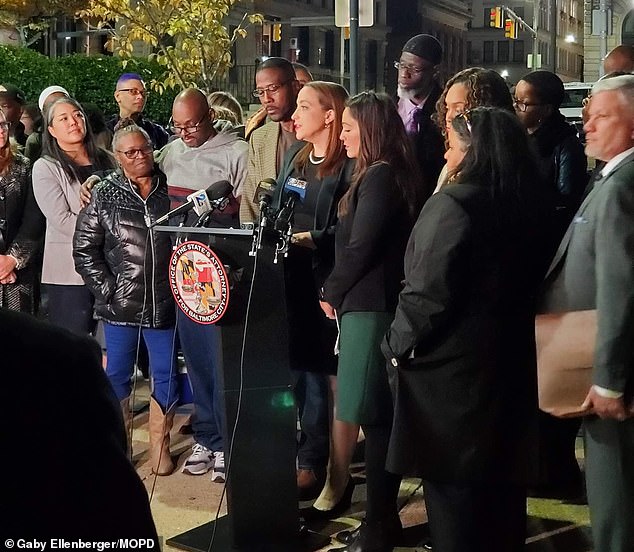 The wrongfully convicted men, and their lawyers, held a press conference after being released on Monday 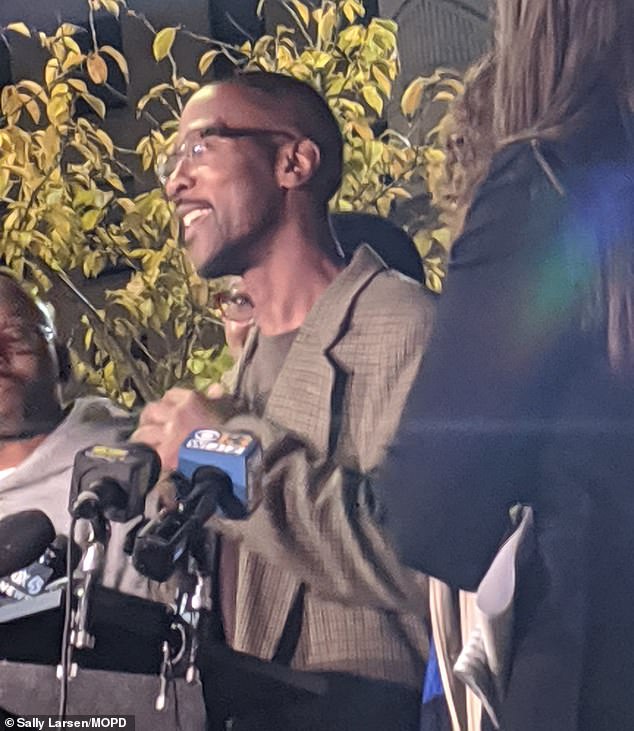 Their case was re-investigated by the Conviction Integrity Unit within the Baltimore State’s Attorney office after Chestnut, 52,  (pictured at the press conference) wrote a letter in May asking for help 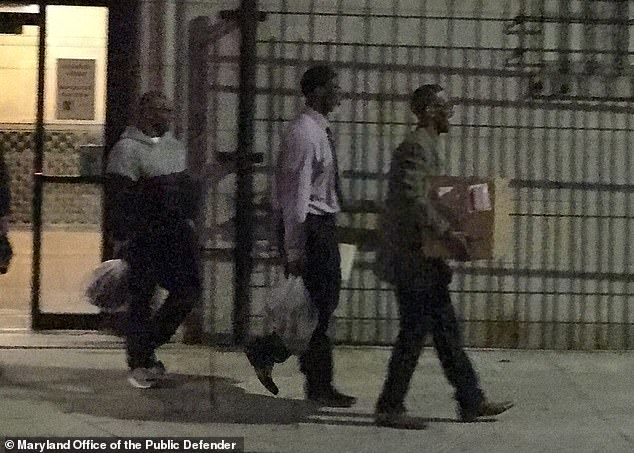 They were from a different school and had skipped their own classes to go to Harlem Park on the day of the murder.

Stewart was 17 and Watkins and Chestnut were both 16.

They had gone to the school, which they were alumni of, to speak to siblings and old teachers but were thrown out by a security guard at 12.45pm – 30 minutes before Duckett was shot.

That night, a Georgetown jacket was also found in Chestnut’s home at 1 a.m. on Thanksgiving Day 1983 when they performed a search warrant.

His mother had a receipt for the jacket and showed it to detectives. But detectives were hellbent on putting the three boys in prison.

They used witness testimony which they coerced out of three young people to convict them. The testimony has been recanted.

According to prosecutors, one of the detectives who was most responsible for the wrongful conviction was Donald Kincaid.

He allegedly told Chestnut during one interview: ‘You have two strikes against you: You’re black and I have a badge.’

In 1988, five years after being thrown behind bars, Watkins had a run-in with Kincaid in prison. 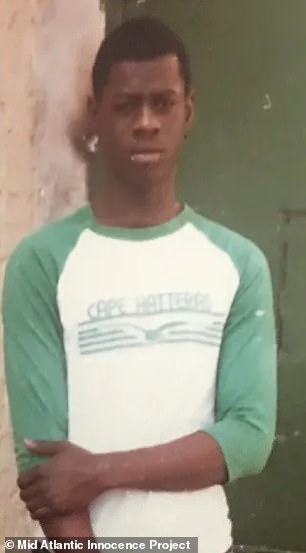 Ransom Watkins aged 16, when he was put in jail

Kincaid was there for another reason but was being trailed by David Simon, a journalist writing a book about him.

The journalist noted their conversation.

Watkins yelled out at him: ‘You remember me, detective?’

When Kincaid replied that he did remember him, he pushed him: ‘If you remember who I am, then how the hell do you sleep at night?’

Kincaid replied: ‘I sleep pretty good. How do you sleep?’

Watkins hit back: ‘How do you think I sleep?” Watkins responded. “How do I sleep when you put me here for something I didn’t do?’

He told The Washington Post on Sunday in a phone interview: ‘At 16 years old, they threw me in a prison among a bunch of animals.

‘The things I had to go through, it was torture. There’s no other way to describe it.’

Stewart, 53, said he had given up hope. Being behind bars for so long meant he missed the lives and deaths of some of his loved ones. He turned to religion to help him through, he said.

Chestnut, who continued trying to get them released after the others gave up, said: ‘I feel like all these years I’ve been saying the same thing.  Finally, somebody heard my cry. I give thanks to God and Marilyn Mosby. She’s been doing a lot of work for guys in my situation.’ 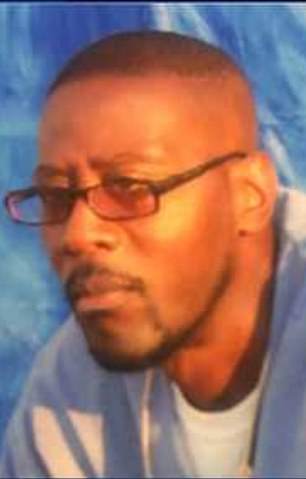 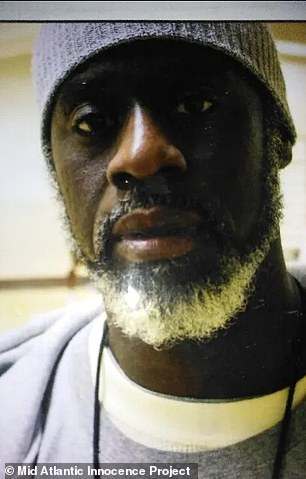 Alfred Chestnut (left), Ransom Watkins (right) and Andrew Stewart are to be released from prison on Monday after 36 years behind bars 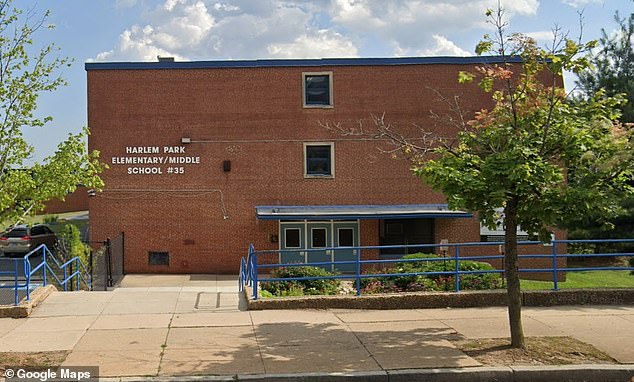 It is unclear if they plan to sue the city. They have an Amazon wishlist with gift cards.

At the hearing on Monday, Baltimore Circuit Court Judge Charles J. Peters said: ‘On behalf of the criminal justice system, and I’m sure this means very little to you, I’m going to apologize. We’re adjourned.’

She said: ‘I’m sorry. The system failed them.

‘They should have never had to see the inside of a jail cell.

‘We will do everything in our power not only to release them, but to support them as they re-acclimate into society.’

How the Qualcomm Snapdragon 765 will impact 2020 Android phones