Dance of the Sugar Plum Ghoul

Warning: The following review has full spoilers for the episode.

Coming off of last week’s stellar episode, “Fresh: Eve” focused on building towards a huge mission against the Nutcracker that is sure to play out in the next episode or two. Because of this, Episode 3 feels like it is wasting time until then and comes off as the most uninteresting episode thus far. The only redeeming factors are the welcome return of Juzo and the entertaining lighthearted tone that feels deserved knowing what’s ahead for the Quinx squad.

There is a whole lot of “wait and see” from start to finish. Sasaki being offered the chance to regain his memories is a sudden turn I didn’t expect this early on in the season, but it seems that we won’t see his decision for a while longer. The same can be said for good old Urie. He’s been a one-note character only with a fresh coat of paint each new episode. He puts up a front of acting cool, spouts off empty threats in his head, and then goes about his business of going behind everyone’s backs. 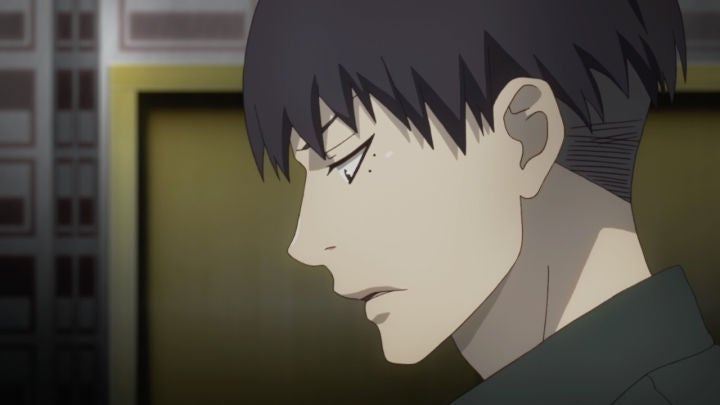 It’s clear to me that at some point Urie will ruin a mission or otherwise create major problems for the Quinx squad with his rogue behavior, but until then, he comes off as a nuisance more than anything else. It would have helped to at least be given some insight in “Fresh: Eve” as to why he seems to hate and blame everyone around him for the death of his father. Tokyo Ghoul:re has done little to justify why it is putting so much focus on him rather than his more interesting teammates like Mutsuki.

Thankfully, it seems that Mutsuki could be getting the spotlight in the next episode, but again, that’s not until next week. Saiko managed to make the wait a little easier by continuing to be her awesome, lazy self. She stole every scene in Episode 3 that featured her from the negotiations in her bedroom to goofing off in the dance club. The Quinx squad infiltrating the club was playful, but it felt earned after the seriousness of Episode 2 and what’s sure to come next week with the Nutcracker.

I couldn’t help but chuckle at Roma watching Sasaki even if it was a little too on the nose. Her rant about wanting the old, tragic Kaneki back came off as both hilarious and self-aware on the writer’s part. It was even more ironic and timely considering Sasaki was going through an existential crisis at that exact moment.

The return of Juzo added to the lighthearted nature of “Fresh: Eve.” It was warming to see him treat Sasaki in a way that was reminiscent of how he pickpocketed Kaneki in the first season, however, I couldn’t help but feel disappointed that he didn’t seem too different despite what Shinohara did for him. This is, unfortunately, another case of having to wait to see what’s really going on with him.

Though not necessarily bad, Tokyo Ghoul:re Episode 3 does suffer from being the most unremarkable episode yet. While Saiko continues to be just as awesome as ever and the rant from Roma shows self-aware writing, it doesn’t hide the fact that “Fresh: Eve” seems solely meant to build up the drama surrounding the Nutcracker for the next episode. Urie continuing to be rogue Urie, Juzo returning to the show, and even Sasaki’s chance to regain his memories take a wait and see approach that ultimately makes this episode feel like filler.

Icahn, with 6 percent of Newell Brands shares, hasn’t decided which side he’s on

Twitter has plummeted in last month, and chart suggests relief ahead

Apple TV Plus offers free access to some original programming