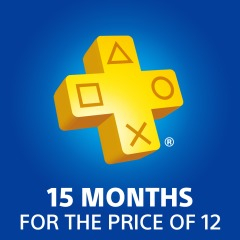 PlayStation Plus Membership 15 Months for the Price of 12

Well, we can make this deal even better! CDKeys currently sell a £50 PlayStation credit for £46.99 which can be further reduced when you Facebook Like CDKeys for a 5% off code. This means you can get 15 months of PS Plus for just £43.69.

Grab the cheapest Xbox Live Gold subscription for 6 months at CDKeys. Get it for just over £16 when you Facebook Like CDKeys for 5% off.

Out Now, Nintendo Labo ToyCon Variety Kit from under £54

Labo is currently Nintendo’s highest anticipated accessory, bringing you a new line of build-it-yourself experiences that will be compatible with Nintendo Switch and will launch on tomorrow. Read more here. Buy yours today from the market leading retailers listed below.

In a need of a gaming laptop? It’s an ideal time to shop for one, since several retailers discounted a number of awesome high-tech laptops for gaming. Check out our pick below.

Play a games of an epic fight for survival across the sprawling expanses of the American West and Mexico, as John Marston struggles to bury his bloodstained past, one man at a time. Get this game at Amazon for under £12.

Get Oral-B’s cool 6500 CrossAction Smart Series toothbrush, which communicates with your smartphone via Bluetooth connectivity and is the world’s first of its kind to do so. Snag 67% off this toothbrush today with Amazon’s lightning deals. This deal expires at midnight.

Grab Epson EB-X41 XGA projector at Amazon today and snag more than £120 off its RRP. You will be able to enjoy a bright and clear display with 3,600 lumens and 3LCD technology. Hurry, as this deals expires at midnight.

Official Xbox One Wireless Controller from £35

Looking to buy an official Xbox One controller? Check out the latest deals on 365games.co.uk that will save you up to £15.

Enjoy saving up to £40 off selected Amazon devices up until the 30th April if you are an Amazon Prime member. The selection of qualifying devices include Fire HD 10 tablet, Kindle Paperwhite, Amazon Echo and more. Find out more here and check out our picks below.

Editor’s Note: You need to be an Amazon Prime member to be able to view this deal at deal price displayed. You can Sign up to Amazon Prime here for a free 30-day trial.

Preorder Marvel’s Spider-Man special edition for your PS4 at Smyths Toys now and save £5 when pre-ordered for in-store collection. Offer is valid while stocks last. Discount  will be applied in basket.

Grab an awesome PS4 deal at Tesco, packed with a number of popular games and PS4 console, including the new God of War, Wolfenstein II: The New Colossus, Doom and PS4 500GB console in black. All you need to do is to add all the product to the basket from the list below. While stocks last.

Add the following items to the basket:

Experience playing one of the most captivating strategy games with Frostpunt, which scored 9/10 on IGN Review. This game is currently discounted to £21.24, but you can save further 6% “SUPER6”.

Play on your NES Classic with the officially licensed wireless controller by HORI. Grab it from 365games.co.uk for under £14.

Experience great action RPG filled with beautiful locations, zany and fun-filled combat with NieR: Automata. Snag more than £36 off this game when shopping at ShopTo.

Planning on buying a smoothie maker? Nutri Bullet 600 juicer blender is great for breaking down the  toughest of nuts, seeds, ice, fruit and veg for the ultimate health kick. The box comes with eight attachments and accessories, including extractor blade, tall cup (680ml), short cup (511ml), high torque power base, handled comfort lip ring, stay-fresh lid, user manual with recipes and pocket nutritionist. Get an exclusive deal at Tesco and save £25.

Get the best Amazon speaker so far, which will allow you to watch video, see music lyrics, photos, to-do shopping lists and much more. Although this product is not a part of the current Amazon Prime promo, you can still save £100 when buying two of these smart speakers together.

Editor’s Note: This product only ships to the UK. Terms and Conditions apply.

Be the first to buy of the most anticipated games of the year for £46. This game scored a 10/10 on IGN Review and has just released today. Snag a copy God of War for your PS4 for the cheapest prices I have seen so far.

Purchased the new God of War? Play it in style with a limited edition Sony PlayStation DualShock 4 controller. Get yours at Amazon for under £56.

More Deals for God of War:

Planning on buying Samsung Galaxy S9? Check out the latest deals from Mobiles.co.uk. where they have discounted a number of market-leading contract deals for Samsung’s hottest smartphone.

Need extra storage? You can upgrade your devices with Samsung’s Evo Plus micro SD, which will help you to store up to 256GB of files, photos or videos. It comes with an adapter so it’s easy to transfer your files to your laptop or anywhere else. Amazon discounted Samsung’s EVO Plus 256GB by over £35, so it’s a perfect time to buy it.

Save up to 20% off Funko Pop Products

Funko Pop is giving 10% off on all products to our IGN UK readers with the promotional code “IGNPOP”. And if you are an IGN Box subscriber you will get an additional 10% off, giving you the total saving of 20%.

Improve your VR game with PlayStation virtual reality aim controller. It comes with Farpoint VR game – a groundbreaking new survival shooter, which is exclusive to PSVR. Get yours today and save more than £55 with a free UK delivery.

Protect your files with Corsair’s popular, military style 512GB rugged USB. It was make from aircraft-grade aluminum, which together with an EPDM water seal makes it waterproof to 200 meters. It comes with five years warranty and it’s currently on offer at Amazon, where you can snag nearly £100 off this flash drive.

Get an extra 20% off at Myprotein

Myprotein has expertly curated the basic building block for all health enthusiasts. You can get an extra 20% off Impact whey protein, diet products and other best-sellers. Use code “EXTRA20” at the checkout.

Don’t forget that you can use code “XBOX3%” to get 3% off everything on SCDKey’s website on top of their existing discounts. You can either head straight there or check out our top picks below:

The Best Deals on These Subscriptions

Save 68% off VyprVPN Two Year Plan With Free Trial

Protect your privacy with one of the fastest VPN services for gaming. VyprVPN gives you the maximum performance with its impressive download and upload speeds and ranks at the top when compared with other VPN providers in this category. Want to find out more about VyprVPN? Read our review here.

Save up to 68% off the current VyprVPN subscription plans for all devices and get a complimentary risk-free 3 day trial.

Get the hottest Xbox Live 12 month gold membership subscription at SCDKey. You can get 3% off and bring the price down to £34.03 with code “XBOX3%”. Check out more Xbox One Digital deals below.

There is a tonne of great deals on the PSN store right now, so save even more by buying them through reduced PSN credit. Get the £50 PlayStation Network card digital code for all your PSN store needs, available for £43.69 when you Facebook like CDKeys to receive a 5% off discount code.

Get the £50 Microsoft gift card digital code for all your Xbox games store needs, including movies, TV, music, apps and more, available for £44.64 when you Facebook like CDKeys to receive a 5% off discount code.

The seventh instalment of the highly-anticipated IGN Box is now here. This month’s mystery box contains five hand-picked items which celebrates the upcoming release God of War as well as goodies from Doom, Thor, Dragonball Z and an exclusive IGN t-shirt.

A university is giving scholarships to top Fortnite players – TechCrunch

iRobot’s Terra lawnmower will not launch in 2020, as company ‘reprioritizes’ – TechCrunch