Veteran journalist and broadcast legend Cokie Roberts has died at the age of 75.

Roberts passed away on Tuesday due to complications from breast cancer, according to her family.

The bestselling author and Emmy Award winner is being remembered as a pioneer in the journalism industry. She worked for several of the nation’s top news outlets over the years and spent the past three decades with ABC News.

‘Cokie had a storied career over 40 years in television, public radio and publishing,’  ABC News President James Goldston said in a letter to the news division obtained by DailyMail.com.

‘A true pioneer for women in journalism, Cokie was well-regarded for her insightful analysis of politics and policy in Washington, DC, countless newsmaking interviews, and, notably, her unwavering support for the generations of young women – and men – who would follow her in her footsteps.’ 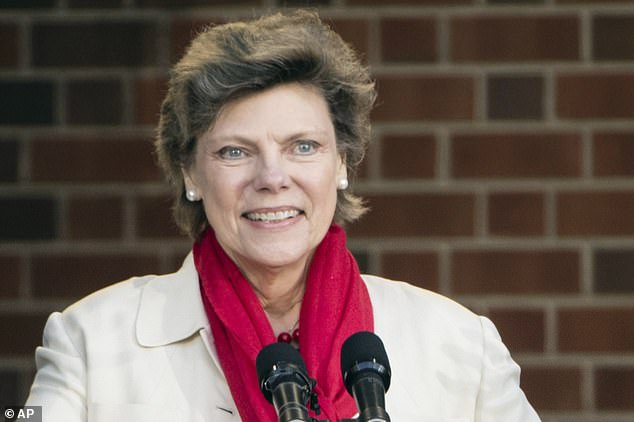 Veteran journalist and broadcast legend Cokie Roberts died of complications from breast cancer on Tuesday, her family said in a statement. She was 75 years old

Roberts started her career as a foreign reporter for CBS in the 1970s before joining NPR in 1978 as a political reporter on Capitol Hill, eventually becoming the emerging outlet’s congressional correspondent.

She joined ABC News in 1988 but remained a political commentator for NPR up until her death.

Roberts started out at ABC as chief congressional analyst for This Week with David Brinkley and later became an anchor alongside Sam Donaldson from 1996 to 2002.

‘[She] was known as one of the smartest political commentators on television and radio for decades,’ Goldston wrote.

Over her 40-year career, Roberts won many major award in journalism, including three Emmys, and received more than 30 honorary degrees.

She was inducted into the Broadcasting and Cable Hall of Fame and was named as one of the 50 greatest women in the history of broadcasting by the American Women in Radio and Television organization.

Roberts was named a ‘Living Legend’ by the Library of Congress in 2008, becoming one of few Americans to ever receive that honor.

She also published six books, many of them best-sellers.

‘Cokie’s career as a journalist at National Public Radio and ABC News took her to the heights of her profession, and her success as an author on history and family put her on the best seller list.

‘But her values put family and relationships above all else.

‘She is survived by her husband of 53 years, journalist, author and professor Steven V. Roberts, her children Lee Roberts and Rebecca Roberts, her grandchildren Regan, Hale and Cecilia Roberts and Claiborne, Jack and Roland Hartman, along with numerous nieces, nephews, and cousins.

‘She is also survived by friendships and by causes that she put her time, resources and energy into that are too numerous to count.

‘We would like to thank the staff at the National Institutes of Health for their dedication, expertise, work and incredible care for Cokie during her illness.

‘We will miss Cokie beyond measure, both for her contributions and for her love and kindness.

‘We are hopeful that Cokie now goes to join her parents, former Members of Congress Hale and Lindy Boggs, her siblings Barbara, Tom and William, who predecease her, and her God.’

Ford Bronco: A generational look back ahead of the new SUV’s reveal

How to Create a Photogram Effect with a Digital Process