HOLLYWOOD — Two rubber bands and a heck of a grip.

Those are the simple secrets of how this year’s Oscars went off without a hitch. Backstage, in the wings of stage right, new PricewaterhouseCoopers representative Kimberly Bourdon keeps a laser focus on the stack of winner envelopes she’s holding, which are bound together in rubber bands for the duration of the show.

The accountant has a specific process. Each time she hands an Academy envelope to a celebrity presenter, Bourdon says: “Can you please confirm you are holding the ‘best (so and so)’ envelope?” Most quickly confirm, but in the final minutes of the show, Warren Beatty, back for a best picture redo, pauses.

More: Phew! Frances McDormand is reunited with her missing Oscar

“This is the best picture envelope, could you please confirm that?” Bourdon asks, proffering the black- and gold-embossed envelope. Beatty looks down at it. “Are you sure?” he asks.

Forgive him some trepidation: After last year’s massive envelope fail, which initially put him and Faye Dunaway in the public’s crosshairs, Beatty was raked over the coals. PricewaterhouseCoopers has since made drastic changes, installing new representatives in the wings, a third accountant in the control room and a no-phones policy for its staff.

(Brian Cullinan, the PwC accountant who handed over the wrong envelope last year, was caught tweeting a photo of Emma Stone backstage just before the astounding mistake.)

Moments earlier, a stoic Beatty strolled in drinking from a can of Diet Coke. “What’s in there? Is that really just Coke?” teases Dunaway.

Oscars 2018: What you didn’t see on TV at the Academy Awards

“That’s Diet Coke,” Beatty responds evenly, looking around. “Is somebody going to give me a card. Where. Is. That. Card?” he says, emphasizing each word.

A producer points to a black envelope in Bourdon’s hands. “The design is a little different than last year,” she says, noting the bigger, foolproof font.

A peek at the next envelope #oscarspic.twitter.com/k0GirYL1a5

With a verbal confirmation in place, Beatty and Dunaway take a familiar stroll out onto the Dolby Theatre stage. But this time, The Shape of Water wins best picture without a hiccup (though director Guillermo del Toro checks his envelope on stage, just in case).

After the credits roll, Bourdon looks relieved. Her first show was seamless. “Good! I feel good,” she says. Beatty calls the reparative experience “deeply moving.”  A Hollywood ending, scripted to a tee.

Here are seven other major moments we witnessed in the wings

Fifteen minutes before the show begins, host Jimmy Kimmel emerges from his dressing room to lead a chant with his team. “Let’s get it right this time!” they shout in unison. “Best show ever!”

A question of where Meryl Streep is seems to terrify production. “We really need Meryl Streep,” a producer says into his headset. Over a headset, it’s relayed that “her people” say she’s almost in her seat for the opening segment, during which Kimmel cuts to her.

Gal Gadot, who has slipped on a black coat over her sparkling Givenchy dress, hits the green room with husband Yaron Varsono, who totes a glass of champagne to go. Mahershala Ali and Oscar Isaac hug it out mid-hallway.

More: 7 things you should know happened at the Oscars

Frances McDormand grabs her Three Billboards Outside Ebbing, Missouri co-star Sam Rockwell in a bear hug, before fixing his bow tie. She’s making a quick bathroom stop before the show starts. “Follow Sam (to the green room) and I’ll be right there,” she tells husband Joel Coen. “Just don’t go anywhere without me.”

Laura Dern and Greta Gerwig gave each other a helping hand backstage before presenting together at the Oscars. (Photo: Matt Petit/A.M.P.A.S./USA TODAY NETWORK)

As Greta Gerwig strolls up to the stage, a makeup and hair artist approaches. “Can I get some of these flyaways?” she asks. “Oh, sure, do whatever you want,” Gerwig replies, also requesting powder for shine on her face. As the artist hairsprays her crown, Gerwig swears they know each other. “I know, I worked with you on No Strings Attached,” says the woman. “Oh, right!” replies the Lady Bird director.

Her co-presenter, Laura Dern, walks up and the two fall into a deep conversation, pausing to check and make sure each other’s dresses look OK from all angles. Gerwig gives Dern the “perfect” sign. “We both need to remember this because we’re the same person: Don’t slouch,” Dern says. Gerwig nods. “We’re both so tall,” Gerwig says, straightening her posture.

The two weigh how to walk out on stage together. “What do you think, everybody? Like this?” Dern asks, polling the gathered crowd on whether to link arms or hold hands. The linked arms could make for awkward walking, perhaps. Holding hands it is. “We crowd-sourced it,” Gerwig says with a grin. With an exchange of “I love you’s,’” they make their way to the stage. 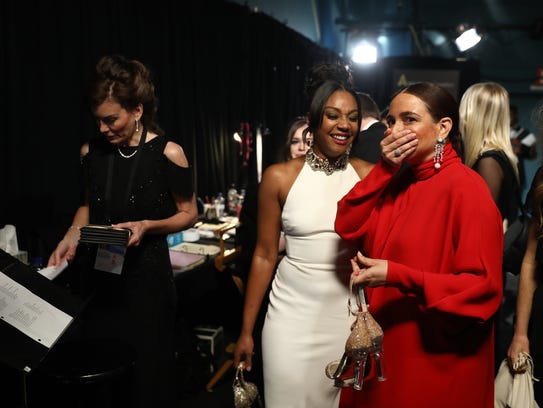 In the wings, Tiffany Haddish prepares for her Oscars debut, shimmying in her white Alexander McQueen gown. “I’m so excited, and I just can’t hide it,” she sings. Matthew McConaughey comes back from presenting best film editing and Haddish addresses him square on: “You did a good job, you read so well,” she says, putting on a motherly tone that makes him grin. “I’m very proud of you.”

She and Maya Rudolph are sliding into slippers and carrying pairs of heels, which will be part of their bit on stage. Haddish riffs on how her bare feet will go over on TV. “ ‘Do you see those bunions?’” she imagines audiences at home will say. “’Do you see them corns?’ The foot fetish people will be all about it,” she says, cracking up the staff backstage.

After their segment, Haddish celebrates backstage. “We did it!” she says. Rudolph agrees. “Now we’ve gotta find our shoes.”

More: Tiffany Haddish and Maya Rudolph should host next year’s Oscars, says nearly everyone on the Internet

In the moments before Salma Hayek, Ashley Judd and Annabella Sciorra take the stage together for their Time’s Up segment, the trio link arms and share a quiet moment of solidarity. After they present, Hayek looks relieved. “It’s over!” she says, exhaling.

Gina Rodriguez exits the stage feeling grateful. “Thank you for sharing this experience with me,” she says to Tom Holland. Meanwhile, BB-8 arrives discreetly in two gray sacks — one for his spherical head, and one for his bulbous body. The adorable ‘bot is assembled stage-side.

Kimmel’s giant green Jet Ski, which sits just off stage (meaning most stars walk by it after a win) is the gag that keeps on giving. After winning best visual effects for Blade Runner 2049, John Nelson says he knows his long speech cost him the prize.  “We’re not getting the jet ski, but I don’t care,” he grins.

‘Thanks, bro!’ Emma Stone meets up with her brother

Emma Stone’s brother, Spencer, patiently holds his sister’s purse while the actress presents best director to Guillermo del Toro. “Thanks, bro!” she says afterward, walking into the wings and taking her clutch back.

Celebs back here are supportive of each other. After Nicole Kidman presents Jordan Peele with his best original screenplay Oscar, she walks him backstage. “Quick, you’ve got to get back to your seat!” she says, as photographers swarm.

More: Jordan Peele (and the Internet) react to ‘Get Out’s big win

Following James Ivory’s win for adapting Call Me By Your Name’s screenplay, Chadwick Boseman and Margot Robbie pose with the 89-year-old backstage. (He’s now the oldest Oscar winner ever.) Both instinctively give a helping hand: During a photo moment, they wrap their arms around Ivory while the Black Panther star holds onto his Oscar and Robbie takes care of his cane.

Exhales all around and a special birthday shoutout

After the credits roll, no one leaves the stage. For more than 15 minutes, the cast of The Shape of Water celebrates, and Beatty and Dunaway stick around to give hugs. Beatty offers Bourdon, the PricewaterhouseCoopers rep, kind words and Dunaway even holds her hand before saying goodbye. Dave Chappelle reappears, an unlit cigarette in his hand.

In the tunnels of the Dolby Theatre, Kimmel celebrates with his team, discussing how particular comic bits went. “That bit with Jennifer Lawrence and Jodie Foster played very well,” he said, noting “it’s not easy” to pull off such subtle banter.

The group raises a toast. “Yay, Jimmy!” voices ring out. “Good job,” he tells everyone, before turning to his wife and co-head writer, Molly McNearney. “And happy birthday, Molly!” (Her birthday is next week.) McNearney laughs. “It’s about me now,” she jokes.

More than 30 corrections cadets and staff fired over Nazi salute